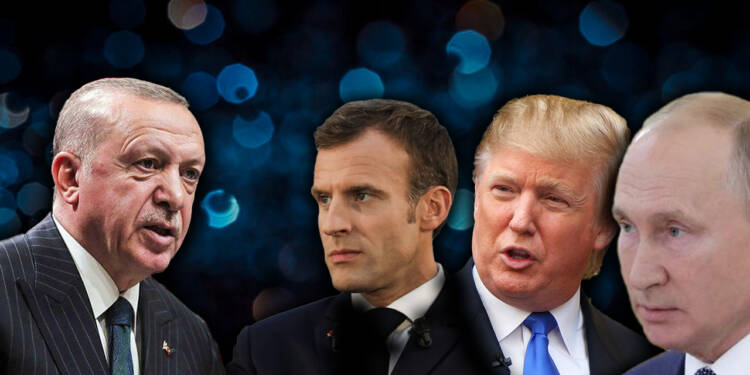 The Nagorno-Karabakh conflict between Azerbaijan and Armenia in the South Caucasus region is turning out to be a major game-changer. Turkey’s belligerence against Armenia and the deployment of Syrian jihadists in yet another conflict zone is irking France, Russia and the United States of America. All these three countries share common concerns regarding Turkish President Recep Tayyip Erdoğan’s expansionist belligerence, and therefore an unlikely alliance comprising the US, France and Russia is coming together against Turkey.

It is difficult to imagine the US and Russia on a common diplomatic platform, making similar demands for shared geopolitical goals. France, Russia and the US are the permanent members of the Minsk Group that was constituted after an armed conflict erupted for the first time between Armenia and Azerbaijan over Nagorno-Karabakh. Today, all these three military powers want a ceasefire between Armenia and Azerbaijan, whereas Erdoğan wants to ensure that the fighting continues.

The sudden bonhomie between France, the US and Russia started last month, after Paris pushed a proposal for talks among the ‘Minsk group’ in the background of armed hostilities between Azerbaijan and Armenia. An official at French President Macron’s office had then said, “We will trigger in the coming days a co-ordination of the Minsk Group to clear up what happened, who is responsible and find a way out.”

When France, Russia and the US were individually calling for a ceasefire in the Nagorno-Karabakh dispute, Ankara simply refused every single demand for putting a break on hostilities. Russia brokered two ceasefires between Azerbaijan and Armenia, but both of them collapsed. Ultimately, the Minsk group realised that it will have to come together in order to effectively bypass Turkey and negotiate an effective ceasefire in the Nagorno-Karabakh conflict.

Earlier this month, France’s Foreign Minister, Jean-Yves Le Drian, said that talks among Russia, France and the US would be held in Moscow and Geneva, in a bid to ensure that the two warring sides in South Caucasus agree to negotiate a ceasefire.

In fact, the Minsk group is leading the ceasefire negotiation efforts in the Nagorno-Karabakh conflict. On October 23, the Minsk Group co-chairs met in Washington along with the Foreign Ministers of Armenia and Azerbaijan. They agreed to meet again in Geneva on October 29.

An American administration official said, “U.S. leadership with support from Russia and France brings additional hope that the ceasefire will lead to a lasting peace settlement.”

Indeed, the US has been able to negotiate a third ceasefire between Armenia and Azerbaijan with Russian and French support. The US President Donald Trump tweeted, “Congratulations to Armenian Prime Minister Nikol Pashinyan and Azerbaijani President Ilham Aliyev, who just agreed to adhere to a cease fire effective at midnight (October 26). Many lives will be saved. Proud of my team @SecPompeo & Steve Biegun & @WHNSC for getting the deal done!”

Congratulations to Armenian Prime Minister Nikol Pashinyan and Azerbaijani President Ilham Aliyev, who just agreed to adhere to a cease fire effective at midnight. Many lives will be saved. Proud of my team @SecPompeo & Steve Biegun & @WHNSC for getting the deal done!

While the ability of France, Russia and the US to come together and negotiate a conflict is rather surprising given the unpleasant history between the US and Russia, it seems that France has been able to club them together by targeting the common enemy in Turkey.

France, Russia and the US- all of them share a sense of animosity for Turkey. As for Russia, it is locked in several conflict zones with Turkey, including in Libya and Syria. Only on Monday, Russia’s airstrikes killed 56 fighters from a Turkey-backed rebel group in Northwest Syria.

And then Russia is anyway irked by how Ankara is bullying Armenia, a post-Soviet Russian ally that shares deep military ties with Moscow.

As for the US, there has been a lot of fury over reports of Ankara activating its Russian-made S-400 Air Defense System and tracking US-made Greek F-16 aircraft returning from multi-lateral Eunomia exercise on 27th August. The idea of a NATO member tracking a US-made jet piloted by fellow NATO member and ally using a Russian S-400 air defence system hasn’t gone down well within the US leading to further deterioration of US-Turkey ties.

But Erdoğan is unabashed and has been daring the US to impose economic sanctions. The US Embassy in Turkey has itself warned, “The U.S. Mission in Turkey has received credible reports of potential terrorist attacks and kidnappings against U.S. citizens and foreign nationals in Istanbul, including against the U.S. Consulate General, as well as potentially other locations in Turkey,” while temporarily suspending consular services.

Finally, France’s relations with Turkey are at a nadir in the background of Macron’s crackdown on radical Islamists. The Turkish President has gone as far as saying, “Macron needs treatment on a mental level,” something that has certainly not gone down well in Paris.