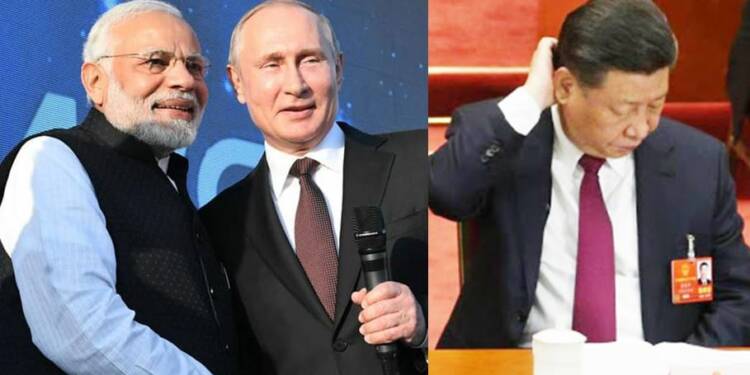 Kremlin has again proven that when it comes to sustained friendship in foreign relations, none have stood the test of time as resolutely as India & Russia. Recently Russian President Vladimir Putin had said that there is no need for a Russia-China military alliance and denied any possibility of the same in the future. It confirms that relations with India are too precious for Moscow compared to its relationship with China.

Although the comments made by President Putin were short, the Carnegie Moscow Centre director, Dmitry Trenin has provided detailed Russian perspective regarding the issue. He said that signing a formal military agreement with Beijing would be impractical and counterintuitive for Moscow as it will force other traditional partners of Russia (in particular India) to get closer with the USA.

As reported by Itar Tass, Trenin stated that “Russia does not need to strike a formal military alliance with China against the United States now. Such union would tie the hands of both parties and would scare the neighbours, India in particular, who would be forced to abandon partnership with Russia and cooperate closely with the US.”

However, this is not the only reason. There are many unresolved issues between Moscow and Beijing, be it the border dispute or China’s claim to the Russian Far East and Vladivostok. President Putin is a realist and knows very well that any military alliance will force Russia into an isolated corner with China. It will force the country to toe the line of the Chinese Communist Party. And acting as someone’s second fiddle would be the last thing Vladimir Putin would do. We have seen this is in Russia’s cold attitude towards China’s Belt and Road Initiative.

China has deliberately used its puppet World Health Organisation (WHO) to compromise the Russian Sputnik Vaccine programme. Even though it knows how important the vaccine programme is for Moscow, it has left no stone unturned to make the Russian Vaccine fail. Putin has been keeping tabs on this, which is why he has said that a military alliance with China is not going to happen.

Read more: China is using the WHO to promote its Vaccine and bury Russia’s COVID vaccine.

Moscow also has been alarmed by China’s resurfacing of its claims of Vladivostok and other Far Eastern territories of Russia. So at a time when Russia has been increasing its military presence in the Far East, how can it be possible to forge a military alliance with the same country you are defending your borders from.

This “tweet” of #Russian embassy to #China isn’t so welcome on Weibo
“The history of Vladivostok (literally 'Ruler of the East') is from 1860 when Russia built a military harbor.” But the city was Haishenwai as Chinese land, before Russia annexed it via unequal Treaty of Beijing. pic.twitter.com/ZmEWwOoDaA

As China has been acting against Russian interests, Moscow too has taken actions to signal that there can be consequences. Recently, making use of the pandemic situation, Russia had suspended the deliveries of S-400 surface to air missile (air defence) system to China. This suspension came just after Russia had accused Beijing of spying.

Read more: Russia is stepping up military presence in its Far East as China claims Vladivostok and rants about Indo-Russia friendship.

China, since Mao’s time wanted the USSR to play second fiddle, but, the times have changed and even if China is portraying itself as an economic powerhouse, Russia is not perturbed. President Putin has sidelined China and sent the most straightforward message to Xi Jinping, that China cannot take the place of India in terms of Moscow’s commitment to a security-oriented relationship.

The messaging is followed by hard verifiable actions. In line with the optics, Moscow has fulfilled New Delhi’s defence requirements as per the list which India gave to the Russians in June. The defence requirements were handed over during Indian Defense Minister Rajnath Singh’s visit to Moscow in the backdrop of escalating tensions with China after the Galwan Clash. The deliveries are expected to be completed by March 2021.

In July, New Delhi had approved the proposal for procurement of 21 MiG-29 and 12 Su-30 MKI aircraft – along with up-gradation of existing 59 MiG-29 aircraft. The defence partnership between India and Russia has always been the highlight.

These fast-tracked deliveries of Defence equipment means that Russia remains unhinged in the face of Chinese opposition to Russian closeness with India.

Russia will never become China’s military ally and the statement by Putin has made this fact absolutely clear for all the hawks. While Russia has been following through on the defence commitments to India, it has suspended the supply of S-400 missiles to China. The Russian top brass has made it clear that relationship with India is more important than China.