The desperation is evident 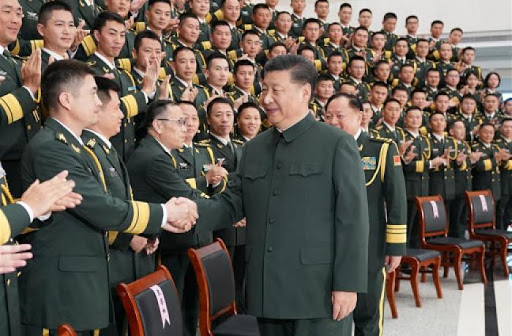 (PC: AsiaNews/This image has been used for representational purpose only)

In the ongoing military standoff between two Asian giants – India and China along the Line of Actual Control in Eastern Ladakh, the paper dragon has now publicised a new, albeit futile stunt. Chinese state media has pompously reported that the People’s Liberation Army soldiers are all set to receive winter clothing, made of ‘graphene’. While giving us a sense of the climatic conditions in the region, the move by China also acts as an authoritative stamp on the fact that its soldiers are currently being made to go through hell.

However, while the Chinese state media has reported rather excessively on the development, and on the benevolent nature of top CCP officials who are ensuring that the PLA soldiers get the best winter outfits, the fact remains that winter has already set in and that Chinese little emperors are already freezing in Ladakh’s snow.

The move, perhaps, is a desperate attempt by Xi Jinping to save face on multiple global forums he is scheduled to attend this month. In fact, the CCP General Secretary and Prime Minister Narendra Modi will be face-to-face in at least three virtual summits.

Therefore, in order to portray China as a country which cares for its soldiers by ensuring the best clothing and equipment for them, and also to show how the paper dragon holds an advantage over India, the CCP has decided to widely circulate news of ‘graphene’ clothing being procured for its soldiers. Chinese state media reports said that China has shortlisted nearly two dozen private companies to supply advanced unmanned weaponry and graphene clothing to the PLA regiments deployed along the long high-altitude border areas with India.

The PLA will be supplied with “smart warm clothing made of graphene”, which is a form of carbon, even as it also hopes to procure portable solar chargers, portable oxygenators and a multifunctional dining vehicle. For usage in plateau or mountain warfare and border defence, the PLA’s Tibet Command recently invited 22 private arms companies and held meetings to review their products. A CCTV report said, “Many types of rotor-wing and fixed-wing aerial drones, including the Blowfish A2 helicopter drone developed by Zhuhai-based Ziyan UAV and the CW-25 vertical take-off and landing fixed-wing drone made by Chengdu-based JOUAV, were inspected by the PLA.”

While the Chinese Communist Party’s propaganda wing appears to be working overtime to ensure that it transforms the PLA into an Avengers-like fighting force metaphorically, the realities on the ground are starkly different. It would not take an intelligent guess to arrive at the conclusion that the decision to procure ‘graphene’ clothing for PLA soldiers, being a recent one, will take quite some time to reach fruition.

By the time the revolutionary winter outfits are made available to the wimp-like Chinese soldiers, which will not be any time soon, either India would have thrashed the living daylights out of them, or they would have frozen eternally on their own accord. Both ways, China’s decision to procure such winter outfits after winter has set in is a magnificently useless and foolish one.

It has already been extensively reported by TFI how PLA soldiers are being stretchered off to medical facilities from positions of their deployment, where they were facing the well-acclimatised warriors of India. It should thus, not come as a surprise, that Chinese media, in an attempt to coverup for the physical weaknesses of its soldiers, is reporting on how the CCP plans to give the PLA all the requisite material and equipment to fight India.