It tells you everything about global geopolitics today 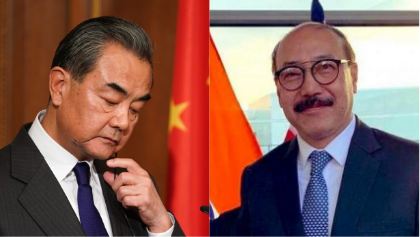 A couple of months after Europe treated the Chinese Foreign Minister Wang Yi with utter disdain on his tour to the continent, India has managed to put up a brilliant show in the European Continent showing the level of diplomatic advantage that India enjoys over China.

In August, Wang Yi had visited Italy, the Netherlands Norway, France, and Germany, in a bid to control the extensive damage that China’s diplomatic image is suffering. However, the tour had turned out to be a disaster, with Yi facing tough questions about human rights violations in Xinjiang and Tibet, as well Chinese political interference in Hong Kong, and also getting rebuffed for issuing threats to EU countries like Czech Republic.

On the other hand, India’s Foreign Secretary Harsh Vardhan Shringla was given a rousing welcome wherever he went. Shringla was able to engage in conversations of mutual interest, as opposed to Wang Yi’s highly confrontational Europe visit.

Shringla went through the Europe tour in a seamless manner. The priority of his tour was, of course, to strike conversations about China and the changing Indo-Pacific situation, without even naming the paper dragon.

Thereafter, in Berlin, the Foreign Secretary directly targeted China and Pakistan. As per Indian Express, sources said that Harsh Vardhan Shringla talked to his German interlocutors about the multiple challenges that India is facing during the ongoing Pandemic, including “tensions on our northern border” and the “ever-present menace of terrorism on our western border”.

As per Indian Express, it has been learnt that Shringla discussed the ongoing military standoff situation between India and China along the Line of Actual Control, the defacto India-Tibet (China controlled) border.

Moreover, as per sources, during an interaction with German think tanks, Shringla took a dig at China and said, “Threats to nation states and sovereignty can also come in other forms. The world is increasingly witnessing debt trap diplomacy in the garb of improving infrastructure and connectivity without heeding financial viability or environmental concerns. While there is no doubt that connectivity among nations needs to be improved, we have to be cautious about the terms of engagement.”

Finally, in London also, Shringla took a veiled jibe at China’s debt-trap diplomacy and warned against “colonial” connectivity projects and loans tying countries to unsustainable debt. In a clear reference to China’s Belt and Road Initiative (BRI), Shringla said, “We must not forget that many cpountries of the Indo-Pacific have suffered a history of colonialism.”

Clearly, Harsh Vardhan Shringla has managed to whip up anti-China sentiment throughout his Europe tour. The Foreign Secretary himself did not have to face any adverse remarks from his counterparts or even otherwise, unlike Wang Yi whose biggest trouble throughout the Europe tour was the difficult questions about Chinese human rights violations.

Shringla’s and Wang Yi’s Europe tours have concluded in a completely different manner. As for Shringla, he clearly enjoyed the luxury of interacting with those who wanted to interact on issues of mutual interest.

On the other hand, Wang Yi was constantly trying to search issues of mutual interest with a set of leaders who actually did not actually see the scope for much engagement with the Chinese Foreign Minister. Therefore, Wang Yi’s tour constantly swung between remarks on Chinese human rights violations and Yi’s attempts to divert attention from the contentious issue.

Shringla is a top-ranking diplomat, but certainly not the counterpart of Chinese Foreign Minister. As such, Shringla is a part of the diplomatic, and not Ministerial staff. Now, by giving the Indian Foreign Secretary greater priority than the Chinese Foreign Minister, Europe has made it clear that India enjoys far more diplomatic leverage in Europe, as compared to China’s leverage in the continent.

The difference in how Europe treated the Chinese Foreign Minister and how it treated the Indian Foreign Secretary has thus accurately encapsulated the vast difference in the diplomatic goodwill enjoyed by the two countries in Europe.