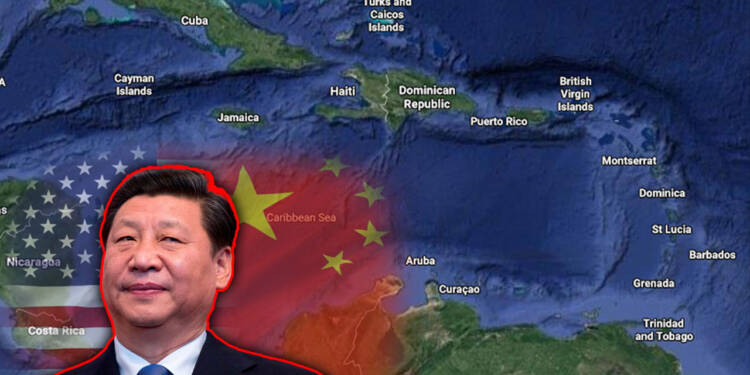 Xi Jinping and his appetite for creating a neo-colonial world order is voracious. After trying to assert dominance in the vast multitudes of South China Sea, the Indo-Pacific, the Indian subcontinent, and Africa, Beijing is now looking to increase its influence in the strategically important Central American countries and the Caribbean. With a Pro-China President all set to take the centre stage, according to liberal media reports, Xi Jinping has got a spring in his step as he readies to corner the US once again in the absence of a leader like Donald Trump, known exclusively for his anti-China policies.

The Caribbean islands might not be important for China from the point of view of economics, as most nations are small and lack the sizable reserves of minerals and other raw materials that often draw Chinese attention. But the region has strategic importance as a hub for logistics, banking and commerce and as experts have put it bluntly–the Caribbean islands could have great security value in a military conflict because of its proximity to the United States.

Low-interest loans by the Chinese government totalling more than $6 billion over 15 years have financed major infrastructure projects and other initiatives throughout the Caribbean, according to the Inter-American Dialogue. Jamaica, which has emerged as an anchor of Chinese activity in the Caribbean, has received more Chinese government loans than any other Caribbean island nation. Of the aforementioned sum, Beijing has lent Jamaica some $2.1 billion for building roads, bridges, a convention centre, and housing.

Sensing the increasing debt on the meagre economy of Jamaica which is heavily reliant on tourism, the Jamaican government, last November as a precautionary measure, had announced that it would stop negotiating new loans from China as part of its effort to reduce debt quickly. However, if Jamaica, or for that matter any other Caribbean country wants to reduce its Chinese debt, then it needs the support of the US.

While upsetting the US by setting camp in its proximity could be one of the reasons for Beijing to march in the Caribbean, the other reason is Xi Jinping’s maniac aspiration of validation–the validation of ‘One China’ policy from the entire planet. Some Caribbean and Latin American nations officially recognize Taiwan instead of China and Jinping cannot gulp this fact down. By choke holding these nations through shark loans, Beijing is trying to force a narrative of its blasphemous ‘One-China’ policy.

China’s efforts in the region are part of its global strategy to forge deep economic ties and strong diplomatic relationships around the world, in part through the building of major infrastructure projects under its ambitious Belt and Road Initiative.

The American ambassador to Jamaica, Donald Tapia, has cautioned the entire Caribbean against installing fifth-generation mobile networks made by Huawei and ZTE. Declaring that these companies have been found wanting on data security issues, Ambassador Tapia produced US State Department information outlining myths and facts about 5G security and Huawei.

Do you know the truth about #Huawei?

Reality: Huawei has a history of spying, stealing, and supporting authoritarian regimes.

Read more about my thoughts on #5G and Huawei here: https://t.co/mhETrpZCNr

While Trump managed to weed out Huawei from the US soil and from several European countries–his work was still largely unfinished in the Caribbean. And if Joe Biden gives China a leeway on the issue, the islands could become a potential surveillance and espionage colony for Beijing and with such proximity to America, the US intelligence services would have a hard time keeping the Chinese at bay.

“The Biden Administration will not publicly admonish governments for economic transactions with China or its enterprises for borrowing from China. Under a Biden Administration, the approach to China will be engaged to push for economic and political change while not losing sight of Peking as a global competitor,” said Richard Bernal, former Jamaican ambassador to the USA, anticipating that a Joe Biden government would go easy on China.

The advent of China-made Coronavirus has further pushed the Caribbean towards Beijing as the paper dragon engaged in its abhorrent ‘Mask-diplomacy’. The Chinese foreign minister, Wang Yi had pledged in July that China would extend $1 billion in loans for vaccines to Latin American and Caribbean countries. Another shark loan provided with the sole aim of using it at a later stage as leverage against these countries.

The biggest casualty of China’s debt-trap policy in the region has been Venezuela. With roughly $67 billion invested since 2007–Beijing has become the main source of Venezuela’s external financing, which has kept the dictatorial President, Nicolas Maduro in power. Even the US hasn’t been able to dislodge him because of China’s money power behind Maduro.

The situation is straightforward for Joe Biden—hash out the Chinese influence by hook or crook or allow China to become a powerful nemesis in the immediate neighbourhood. However, from the little we have seen and heard from Biden during his election campaign, it would be a hyperbole to expect him to bail out the Caribbean and Central America. Joe Biden will have to come out of his China-love stupor and work just as hard as Trump to dislodge China, otherwise, doom is imminent for the region.

‘You’ll need us,’ Japan sends a clear message to Joe Biden, will not stop its aggressive posturing