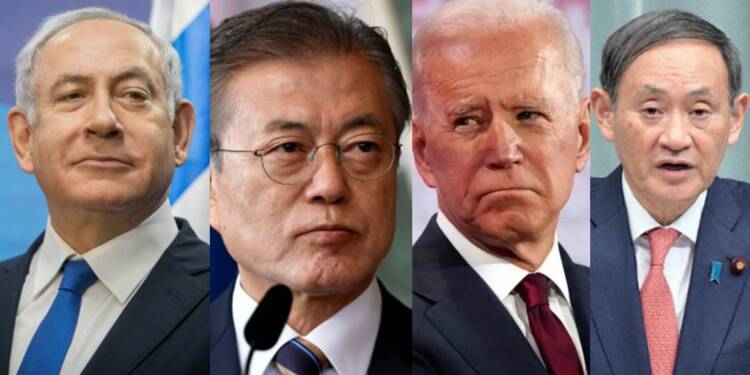 Democrat leader, Joe Biden may have scored a surprise victory in the US Presidential polls, but the free world is giving him a blunt message even before he officially takes charge of affairs in Washington. Democracies around the world from the Western Pacific to the Indian Ocean Region, and the Middle East to Latin America are signalling Biden to stick to Trump’s foreign policy, regardless of his ideological biases.

Japan, South Korea, Israel, India, Brazil and Mexico, have all given subtle hints to Biden about how they have an affinity for Trump’s foreign policy. They want Biden to work in the shadow of Trump’s foreign policy regardless of how badly the US President-elect may have slandered Trump’s decisions during his campaign trail.

Starting with Seoul, the President of South Korea, Moon Jae-in has made it clear that his government will seek to advance Donald Trump’s diplomatic legacy regarding the denuclearisation of North Korea. Biden was a tough critic of Trump’s approach to dealing with Kim Jong-un but South Korea has a different assessment.

Another US ally in the Pacific, Japan, has subtly endorsed Trump’s China policy. A foreign policy adviser to Japanese Prime Minister Yoshihide Suga said that friction between the US and China means that Washington will need Tokyo more than before, irrespective of who wins the American Presidential polls. Results were unclear when the Suga aide made these remarks, but now that Biden has secured an apparent victory, Japan’s message to Biden should be clear- stick to Trump’s harsh China policy in order to maintain strong ties with Tokyo.

The message from Israel, however, wasn’t so subtle. Israel’s Prime Minister Benjamin Netanyahu did wish Joe Biden and tweeted, “Congratulations @JoeBiden and @KamalaHarris. Joe, we’ve had a long & warm personal relationship for nearly 40 years, and I know you as a great friend of Israel. I look forward to working with both of you to further strengthen the special alliance between the U.S. and Israel.”

Congratulations @JoeBiden and @KamalaHarris. Joe, we’ve had a long & warm personal relationship for nearly 40 years, and I know you as a great friend of Israel. I look forward to working with both of you to further strengthen the special alliance between the U.S. and Israel.

But barely 14 minutes later, he again tweeted, “Thank you @realDonaldTrump for the friendship you have shown the state of Israel and me personally, for recognizing Jerusalem and the Golan, for standing up to Iran, for the historic peace accords and for bringing the American-Israeli alliance to unprecedented heights.”

Thank you @realDonaldTrump for the friendship you have shown the state of Israel and me personally, for recognizing Jerusalem and the Golan, for standing up to Iran, for the historic peace accords and for bringing the American-Israeli alliance to unprecedented heights.

Israel has benefitted spectacularly from Trump’s initiative to broker the normalisation of relations between Arab nations and Israel. Countries like the UAE and Bahrain, which were Israel’s arch-foes at one point of time, have today recognised the Jewish country. Netanyahu clearly doesn’t want Biden to ruin the historic Arab-Israel peace process initiated by Donald Trump. Also, Trump’s maximum pressure policy on Iran had a favourable impact on Israel’s security situation, however, Biden could go soft on Iran and Israel has indirectly warned against it.

Meanwhile, India has also come out with a subtle message by welcoming the Trump administration’s move to remove Sudan from the US list of state sponsors of terrorism, and normalisation of Sudanese ties with Israel. The US-Sudan hostility was essentially a legacy of former US President Bill Clinton’s blunders. Trump has now fixed it, and despite Biden’s ideological leanings towards senior Democratic leader, Bill Clinton, New Delhi seems to be more comfortable with Trump’s Sudan policy.

India is hailing what Trump has achieved in a very subtle signal to Biden. New Delhi wants the US President-elect to continue with Trump’s diplomatic legacy.

As for Latin America, leaders of the two largest countries in the region- Brazil and Mexico have simply stayed silent even as other democracies around the world wished Biden and Kamala Harris.

Brazil President Jair Bolsonaro is, of course, known as “the Trump of the Tropics”. He is despised by the left-liberal world led by the Democrats. And then the Amazon rainforest crisis in Brazil under Bolsonaro’s watch and Biden’s climate change activism tend to put the two leaders on collision course. Mexico’s President Andrés Manuel López Obrador went a step further as he has a good rapport with President Trump despite Trump’s political rhetoric domestically. He simply refused to congratulate Biden, saying that he would wait until legal challenges over the vote are resolved in a reference to Trump’s voter fraud allegations against the Democrats.

By not wishing Biden, Obrador and Bolsonaro are making it clear that Biden will have to go the extra mile and soothe their anxiety towards the US after Trump’s defeat in the recent Presidential polls.

Democracies are thus speaking in unison and telling Biden- stick to Trump’s foreign policy if you want to take leadership of the free world.