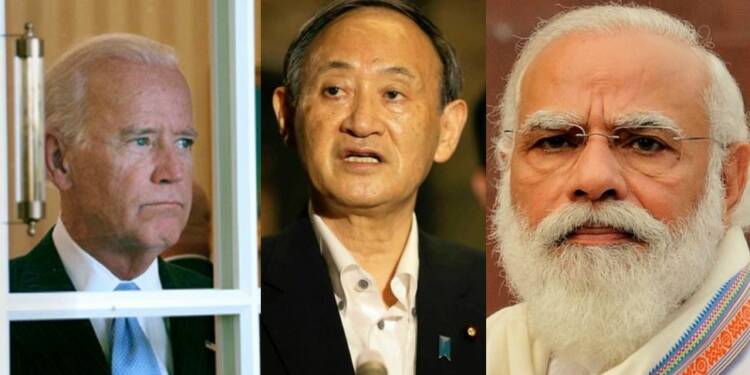 Every US President that comes to power faces the same dilemma- how to carry forward the precious legacy of American global leadership? Joe Biden will face the same challenge when he assumes office as the US President. And he will have to face a particularly peculiar question- how to overcome his pro-China bias while taking the QUAD, the fulcrum of American Indo-Pacific policy forward.

From initial signs, it seems that Japan and India are going to be in the driving seat of the QUAD in the post-Trump era, and Biden will have to follow their lead. Consider this- a foreign policy adviser to Japanese Prime Minister Yoshihide Suga says that the US will need Japan more even as Biden storms to power. The same sentiment also reverberates in India, even as Biden, a past proponent of engagement with Beijing comes to power.

The fact remains that no matter how emphatically Biden slanders Trump’s foreign policy legacy, the most prominent Indo-Pacific powers- India and Japan had accepted Trump’s QUAD leadership. Now, can Biden throw it away just because his political ideology is so twisted that he wants to engage the Middle Kingdom?

Take Japan, for instance. It is one of the most indispensable US allies. And when it comes to the Western Pacific, Biden simply cannot ignore Tokyo. Western Pacific is Japan’s strategic backyard and every action that an American President takes with respect to China and East Asia will have to be recalibrated with Tokyo.

So, for example, Biden cannot wake up one fine day and say that he is ending the tariffs war against China or reversing Trump’s decisions to decouple the American economy from China. Biden must not forget that no matter what he thinks, Japan will not stop taking its manufacturing companies out of China and shifting them to Southeast Asian nations like Vietnam.

What Japan and the US were doing had the combined effect of driving the Association of Southeast Asian Nations (ASEAN) far away from the paper Dragon. Japanese investments in ASEAN and the US decoupling from China was clearly tipping the balance in QUAD’s favour as far as Southeast Asia is concerned. And then, India had also started playing a peripheral role in this region.

ASEAN is rallying behind QUAD because India, Japan and the United States are offering them a better deal. The moment Biden plays spoilsport and tries to take away this deal by engaging China, the ASEAN will have no qualms about landing in China’s lap. In such a scenario, the White House will lose the leadership role in both the ASEAN and QUAD, which will certainly ask tough questions of Biden.

Such are Biden’s compulsions that he cannot engage China even if he wants to. He has to go by the rules that Japan and India had set for the QUAD along with the Trump administration.

Now, take the Indian Ocean Region (IOR) or South Asia for example. This is India’s strategic backyard where Japan is also trying to keep the paper Dragon at bay with significant investments in countries like Myanmar, Bangladesh, Nepal, the Maldives and Sri Lanka.

For decades, India considered the IOR its exclusive sphere of influence. But of late, New Delhi has shown willingness to join hands with the United States in this region. The emphatic manner in which the Trump administration and the US Secretary of State Mike Pompeo, in particular, convinced India about its tough stance against China led to the formation of a rock-solid Indo-US alliance.

Make no mistake, the sine qua non of the Indo-US alliance in the IOR is a White House keen to kick China out of the strategically located region. If Biden suddenly wants to engage China and create problems for India by allowing the paper Dragon to become even bigger, then mistrust can build up between India and the US.

If Biden wants to win India’s trust and expand American diplomatic heft in the IOR, he will have to show the same urge in punishing China as the Trump administration was showing.

As Biden prepares for his Presidential term, he must realise one thing- the QUAD has so evolved that it cannot be used for any purpose, except keeping China at bay. Also, India and Japan have reached the point of no return in decoupling from China. Together with Australia, they are not going to let the QUAD die either. The informal alliance is here to stay and now Biden must follow Japan and India or otherwise the American leadership in the Western Pacific and the IOR will sink in no time.