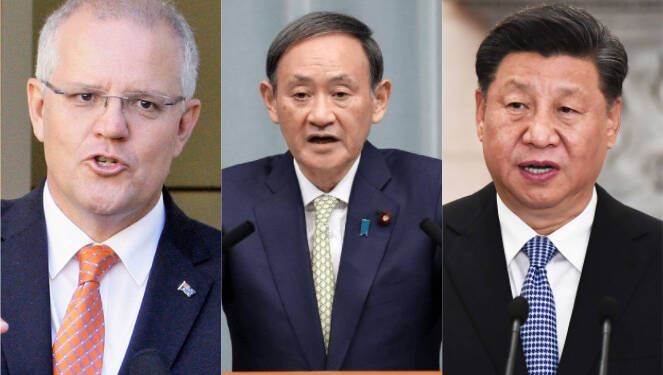 The world’s biggest free trade deal- the Regional Comprehensive Economic Partnership (RCEP) has been finally signed after several years of negotiation. Envisioned as a stimulant for trading activity amongst Asian and Pacific countries, the RCEP includes the ten ASEAN members, Japan, South Korea, Australia, New Zealand and China. RCEP is huge and covers around 30 per cent of the global GDP and more than two billion people.

For understandable reasons, the RCEP is being hailed as a victory for China. It is being claimed that the deal allows China to set trading rules for the region. Yet, the RCEP might turn out to be another dead deal with China at the centre of it, much like Xi Jinping’s flagship BRI. To be very specific, China’s three adversaries- Japan, India and Australia will make sure that the dream of a China-centred RCEP never comes true.

Japan and Australia might have joined the RCEP, and they were most probably inclined to join the newly-formed trading initiative because of the time and energy that they have spent in the last eight years over RCEP negotiations. But their outstanding trading and financial issues with China haven’t really come to an end.

Take the Australia-China trade wars for instance. China has been restricting imports of a variety of Australian products including barley, wine and wheat. China was, of course, guided by ideological and political differences with Canberra in imposing tariffs on Australian products. But will the RCEP resolve such outstanding trading issues by itself? At least an SCMP report seems to suggest otherwise. Make no mistake, the RCEP cannot overcome such contentious trading disputes.

In fact, trading disputes, including the Australia-China tariff war, are going to spill over into the RCEP and give a huge blow to China’s dreams of leading the world’s biggest trading bloc.

As for Japan, the fact remains that the Yoshihide Suga regime has continued Shinzo Abe’s legacy of decoupling from China. Under Suga’s leadership, Tokyo has been competing fiercely with Beijing for influence in the Southeast Asia region.

In this context, one ought to understand that till last year, Japan wasn’t ready to join the RCEP without India. Now, if Suga decided to join the RCEP, then it has to do something with the growing uncertainty about American political leadership. Countries across the world have accepted that Joe Biden is going to be the next US President notwithstanding the serious disputes surrounding the US Presidential poll results. And Japan is no exception.

Till now, Tokyo and Washington were ready to create a joint front in order to woo the ASEAN away from China. Now, Japan is not sure if the US will back its efforts in the region.

If Biden comes to power in the White House, then he will most probably end Trump’s tariff war against China, allowing the paper Dragon to grow even bigger. In such a scenario, the ASEAN could feel a strong urge of getting closer to Beijing, and Toyo will have to go the extra mile in incentivising its manufacturing giants to shift away from China and establish new bases in Southeast Asian nations. Thus, Japan has to remain within the RCEP to be able to negotiate with the ASEAN.

After all, the RCEP’s fate would depend upon the ASEAN. If Southeast Asian nations make difficult demands of Beijing, including lower tariffs and dismantlement of non-tariff barriers, then the RCEP becomes more of a burden for China. Otherwise, China will be able to have its way in the region.

As for New Delhi, it remains an original negotiator and has the option of joining the RCEP whenever it wants. But while India is unlikely to join the trading bloc any time soon, it can always create problems for China by encouraging Indo-Pacific trade outside the RCEP with countries like Australia, South Korea, Japan and even the ASEAN.

Even in the case of BRI, India had spoiled China’s dreams by not becoming a part of the predatory initiative and now New Delhi is also spoiling China’s RCEP dreams. As such, Australia, Japan and India are killing the dreams of a China-dominated RCEP.