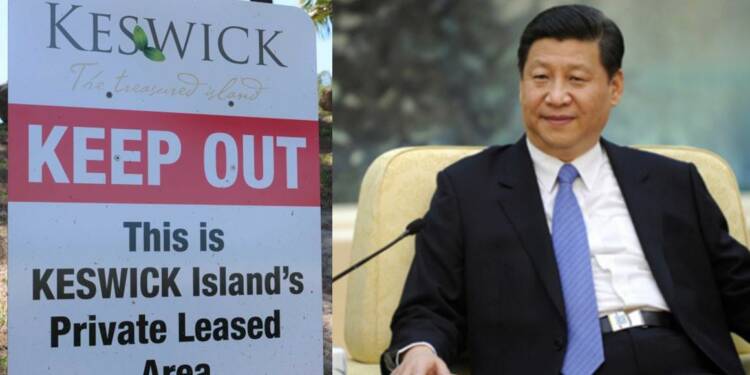 China is simply trying to take over Australia and with the passage of time, shocking examples of increasing Chinese influence down under keep getting exposed. Take, for instance, Keswick Island, located off the coast of Mackay. This island is a tropical paradise with secluded bays and crystal-blue water. Keswick Island is a perfect holiday destination, blessed with a rich turtle habitat.

But things have changed in this tropical habitat now. According to The Courier Mail, In April last year, a Chinese developer, China Bloom Pty Ltd. was handed a long-term lease of the island by the Queensland government. The paper Dragon is believed to have paid millions of Dollars to the previous owner for a 99-year lease of the island. 80 years of the lease are still remaining. Anyhow, life on the island is not the same ever since the Chinese developer took over.

The corporate structure on the island has undergone a drastic change now. China Bloom has the head lease over the residential and commercial precincts of Keswick Island. And the local residents? Well, they are nothing more than mere sub-lessees. Now, it is not very difficult to understand how Chinese interests would treat a sub-lessee.

ABC News quoted homeowners Rayna and James Asbury as saying that they were worried about the island’s future. Ms Asbury said, “To live here is a real challenge now for people.” She added, “Although you’re in paradise, you’re stuck.”

Locals aren’t getting paranoid over nothing. Major changes have happened on the island ever since China Bloom took over. The shoreline has been excavated, access to parts of the National Park prohibited and ‘keep out’ signs erected around the island. The Chinese developer’s conduct is raising genuine doubts about its intentions.

Excavations are, in particular, risky for Keswick’s turtle habitat. Honorary Associate Professor Dr David Booth from the University of Queensland said it was difficult to assess the environmental damage due to lack of data. “Typically, the sea turtles might have targeted that dune to lay their eggs or concentrated along there,” he added. Booth also said, “I don’t think it’s appropriate for developers to go ahead and do things like that without getting appropriate permits because they are altering the beach line, and beaches are actually public property.”

But then turtles are not the only ones at risk in Keswick. Whistleblowers say that residents are being denied the opportunity to use their homes as AirBnBs, small businesses are also not being allowed to operate, visitors are getting harassed and even long-term renters of Aboriginal descent are being asked to shell out $100,000 bonds if they want to purchase a home on this island.

As per couriermail, locals say that access to all private and commercial aircraft and some helicopter services is being denied on the island. A helicopter round trip costs as much as $2,400- making travel to the island more expensive than a trip to Paris. The latest activities could thus be driving tourism away from the island, and also isolating Keswick residents.

For natural reasons, property prices on the island too have slumped. Real estate agent and resident Karen Cooke said, “Houses have been built for say $800,000. They’re going under contract for just under $200,000 and less.” The fear among the locals is that the Chinese are “trying to push us out and develop the island exclusively for rich Chinese’’.

The Keswick episode is grotesque enough to sound unreal. It is a major strategic problem for the security situation of the country. But then Australia is full of such examples from the Darwin port lease to Victoria BRI. Chinese influence in Keswick Island once again proves why Australian Prime Minister Scott Morrison’s anti-China tirade is worth it. Canberra must put up a spirited fight to throw Beijing out of its system.