The US is staring right into a dangerous shake up 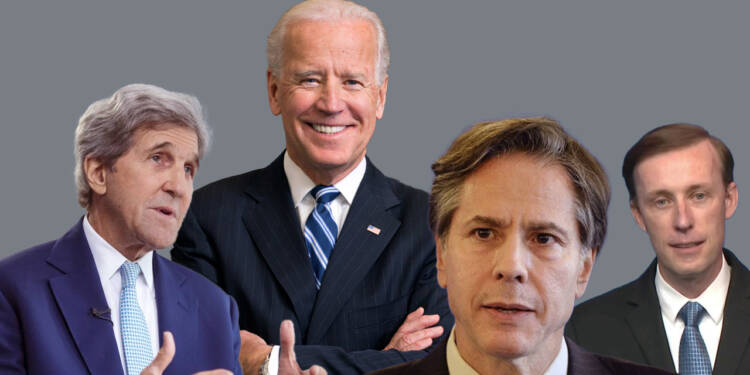 The US is staring right into a dangerous shake up. Democratic Presidential nominee Biden, who has already been elected as the next US President by American liberal media, is planning to bring his own set of officials to Washington DC. The officials on Biden’s radar have no semblance with anti-war officials in the Trump administration. Biden wants to bring back the infamous war lobby in Washington DC and start another dark era of regime change wars in different parts of the world.

Biden is looking at recruiting some real war-mongers in his administration, if and when he storms to power. Some of the most prominent names among Biden’s newly-announced nominees are Tony Blinken, John Kerry and Jake Sullivan. All these nominees are supposed to take top positions in a Biden administration. And the only common link behind these names is a number of reckless and catastrophic military decisions throughout their careers.

Take for example, John Kerry, who was the US Secretary of State in the Obama administration. His track-record includes unapologetic support for the infamous American invasion of Iraq during the Bush administration. Kerry was actually the one making false claims about Iraqi “weapons of mass destruction”.

As the US Secretary of State, Kerry was the one advocating ‘use of force’. In a leaked audio, he was heard saying, “I think you’re looking at three people, four people in the administration. I lost the argument. I’ve argued for the use of force. I’m the guy who stood up and announced that we’re going to attack Assad for the use of weapons.”

Now, Biden wants to appoint Kerry as a Special Envoy on Climate, a role remarkably different from the one that he played during the Obama administration. But his inclusion in a Biden administration nevertheless shows which way Biden is going.

Another such nomination is that of Tony Blinken. Biden has chosen him for the all-important Secretary of State position. Blinken has had a dubious past, in terms of foreign policy decisions. He, of course, supported the 2003 Iraq invasion just like Biden. In 2011, he supported another catastrophe- the Libya war that continues to haunt this Middle East nation till date.

But the most shocking nomination is that of Jake Sullivan as the US National Security Advisor. He is the same man who wrote to Hilary Clinton on February 12, 2012, in order to tell her, “Al Qaeda is on our side in Syria.”

Presenting to you the new US National Security Adviser – Jake Sullivan, who wrote to Hilary Clinton on 12th Feb 2012 “𝗔𝗹 𝗤𝗮𝗲𝗱𝗮 𝗶𝘀 𝗼𝗻 𝗼𝘂𝗿 𝘀𝗶𝗱𝗲 𝗶𝗻 𝗦𝘆𝗿𝗶𝗮”. This is what you voted for America, now you have nobody else to blame.https://t.co/k7QNLh1hnq https://t.co/aDDH11l1W8 pic.twitter.com/dJs4hPsYyr

Compare a Biden administration with the present American administration that boasts of officials like Mike Pompeo, the US Secretary of State, who has managed to broker peace deals between Israel and the Arab world. In fact, even others like the former US Defence Secretary Mark Esper did make unprecedented efforts to push peace efforts and withdrawal arrangements in war-ravaged countries like Afghanistan.

Trump is the first US President after Ronald Reagan not to start a new war. He resisted officials like John Bolton or Rex Tillerson, who did have a tendency to lean towards interventionist policies. But with Biden, we cannot expect any resistance against interventionism. Remember, Biden himself has had a history of supporting Iraq invasion in 2003- the most blatant example of American military adventurism.

Biden plans to pass off the American war-mongering lobby as a team of foreign policy experts, and this is some really terrible news for the entire world. If Biden comes at the helm of affairs, the world must prepare itself for bloody invasions and reckless regime change wars.