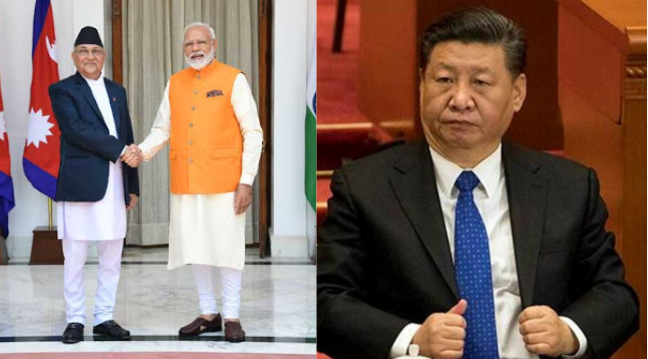 After remaining in the drunken stupor of China, Xi Jinping, and Hou Yanqi for more than a year, Nepalese Prime Minister KP Sharma Oli is finally getting back to his senses. According to a Hindustan Times report, KP Oli is believed to have suggested to Chinese ambassador Hou Yanqi last week that he is capable of handling challenges within his party without any assistance from other countries. Yanqi in the past has acted as the bridge between Kathmandu and Beijing. More often than not, she has hijacked KP Oli’s authority and conducted meetings with the cabinet ministers and the opposition alike to sway the narrative in favour of China in the Himalayan country.

After being undermined by the Chinese ambassador and facing flak from former Prime Minister Pushpa Kamal Dahal ‘Prachanda’—the report states that a frustrated Oli has even told his supporters that he is open to a split in the party – an eventuality China has been working to avert through Yanqi.

Read: A Prime Minister and the Pretty Ambassador – Why is Nepal PM Oli giving the Chinese ambassador absolute powers?

Nepal and India have been thick as thieves in the past before China swooped in and started orchestrating its nefarious plans. Nepal which had always sided with India’s version that Pakistan was a terrorist and rogue state seemingly started toeing China’s line on the issue. However, after Oli’s change of heart, the Nepalese citizens who have always been close to India, despite the government’s opposite stance took to the streets to show solidarity with India.

A Candlelight march was held on Friday outside the Pakistan mission in Kathmandu by around 40 participants on the 12-year anniversary of the Mumbai Terror attacks of 2008 in which more than 160 people had lost their lives. The demonstrators walked in front of the mission for an hour, shouting slogans and carrying posters, protesting against the 26/11 Pakistan sponsored attack.

According to ANI, a day prior, thousands of people in Nepal took to the streets to protest against Pakistan’s role in perpetrating the 26/11 attacks. People staged demonstrations across the country with banners, and roadblocks were also held in several parts of the country.

KP Oli’s volta face in his decision-making process can be gauged by the developments of the past couple of months from the Indian side. The visits from Foreign Secretary to Army Chief to RAW’s chief have seemingly brought back Nepal into India’s fold.

Secretary Harsh Shringla, was the latest to visit Nepal where he called upon his Nepalese counterpart, and also met Prime Minister Oli. Shringla also met the Nepalese President and Foreign Minister.PM Oli conveyed “Nepal’s desire to build on the momentum in the bilateral relationship and enhance the level of bilateral engagement.”

The contentious boundary issue also came up for discussion between the two sides, and a Nepalese release noted, “Both sides shared their perspectives on boundary matters and discussed ways to take it forward under the appropriate bilateral mechanisms.”

Late last month, India’s intelligence (RA&W) chief also visited Nepal, and called upon PM Oli, assuring him that India will not allow interruption in the friendly bilateral relations with Nepal and resolve all outstanding issues through dialogue. The visit by the RA&W chief came ahead of the Indian Army Chief, Gen. Manoj Naravane visiting Nepal to reset the bilateral ties between both countries. The visit was significant as General Naravane became the highest-ranking Indian dignitary to meet the Nepalese leadership in the backdrop of the Kalapani territorial dispute. In fact, Gen MM Naravane was even conferred the honorary rank of General of the Nepali Army by President Bidya Devi Bhandari.

China, which had pooled vast resources and huge amounts of money to hypnotize the Nepalese bureaucracy must be shell shocked that India took merely a month and some two-three visits by its high-ranking officials to turn Kathmandu in its corner. A bureaucratic checkmate from New Delhi to the Politburo of Beijing and Xi Jinping must be seething through his teeth in anger.