Aus-China relations have soured to point of no return 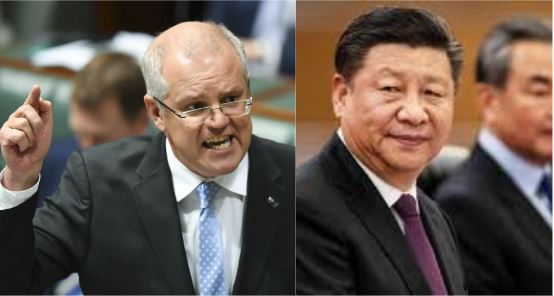 The diplomatic feud between China and Australia is getting intense by the day with Beijing stooping to new lows and resorting to ugly tactics to save its face. China is unapologetically targeting Australia, not just the Australian leadership but its armed forces now. On Monday, Chinese Foreign Ministry spokesman Lijian Zhao posted a fabricated image that portrayed an Australian soldier with a bloody knife next to a child. The child is seen holding a lamb. The image appears to be a reference to previously reported allegations that elite Australian soldiers used knives to murder two 14-year-old Afghan boys. The Australian Broadcasting Corporation reported the ADF report did not substantiate those allegations. Zhao is posting ‘falsified images’ of Australian soldiers to create a bogus narrative around the world.

While posting the falsified image, Lijian had tweeted, “Shocked by murder of Afghan civilians & prisoners by Australian soldiers. We strongly condemn such acts, &call for holding them accountable.”

Shocked by murder of Afghan civilians & prisoners by Australian soldiers. We strongly condemn such acts, &call for holding them accountable. pic.twitter.com/GYOaucoL5D

However, Australia’s Prime Minister Scott Morrison, who has time and again quashed China’s nefarious plans to run a smear campaign against Australia once again took the game to Beijing in its den and used the Chinese social media platform WeChat to criticize the ‘falsified image’.

Xi Jinping has banned Twitter in his country but the entire CCP Politburo and the mouthpieces continue to unload verbal diarrhoea on Twitter to push their propaganda. China thought only it had the copyright on the combative “Wolf Warrior diplomacy” and therefore Morisson, out of the blue went on a platform that is highly popular in China and amongst the Chinese community in Australia to send his message loud and clear.

Prime Minister Scott Morrison said Beijing should be “utterly ashamed” for sharing the “repugnant” image. WeChat has 690,000 active daily users in Australia. And according to several media reports, Morrison’s message had been read by 57,000 WeChat users by Wednesday.

This is not the first time that a Chinese government agent has tried to denigrate Australia. China’s state-owned media and mouthpiece Global Times has routinely foul-mouthed the down under country. Reported by TFI, the publication’s editor Hu Xijin, in April this year had passed a rather distasteful remark which showed Beijing’s helplessness. Comparing Australia to chewing gum, Hu had said, “Australia is always there, making trouble. It is a bit like chewing gum stuck on the sole of China’s shoes. Sometimes you have to find a stone to rub it off,”

Between 2010 and 2015, Australia saw five different Prime Ministers in as many years. This made Australia a perfect destination for China. The Chinese Communist Party (CCP) easily infiltrated into Australia’s political system for making commercial gains, and there was no one firmly in place to keep a tab on China’s soft intrusions and manoeuvres into Australia.

However, two years after assuming the PM chair, Scott Morrison has been at China’s throat, more so than any other Australian PM, especially after the pandemic spread across the planet. It was Australia under the leadership of Morisson that took the first step to corner China and demanded that a UN-backed probe be launched to investigate China’s role in the spread of the virus.

After it was unearthed that China had clawed its tentacles deep inside the Australian way of life, Canberra immediately went on a course-correction mode. In the last 7-8 months, Morisson along with his cabinet has strengthened the legislative laws to fix the loopholes that allowed the Chinese to dominate the Australian society.

Reported by TFI–by changing the foreign investment rules which give greater approval powers to the Foreign Investment Review Board (FIRB) to curtail opportunistic takeovers of struggling businesses amid increasing national security risk, Australia has played a masterstroke.

The Morisson government has also cracked down on Australian officials that have been linked to CCP or its infamous United Front. In June, Australian intelligence officers and police had raided the home and office of Labor MP Shaoquett Moselmane. The New South Wales legislator had long been under the scanner for having alleged ties to the ruling Chinese Communist Party (CCP).

By taking the fight to Beijing in its own social media network, Scott Morisson has telegrammed a message to the CCP Politburo that no matter how many reprehensible attempts China undertakes to malign Australia or its image, it will never be successful, for a better, clear, and a much more cohesive plan is always in the bag of Morisson.