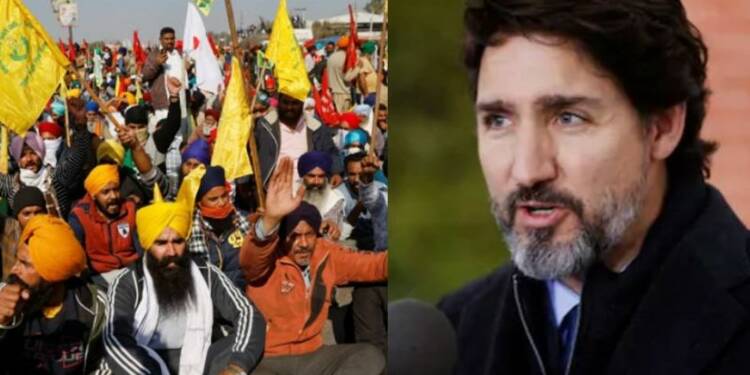 A few days ago, Justin Trudeau, the liberal playboy made some “ill-informed” and “unwanted” comments in support of the ongoing farmer’s protest. The farmers on the Delhi-Haryana border are protesting for MSP- however the government has not rolled back MSP and this is more of a “political protest” but nonetheless- and by supporting them, Trudeau has tried to show that he stands with farmer’s demands. But, on the other hand, the Trudeau led Liberal Party government is among the most vocal opponents of India’s MSP in international forums like the World Trade Organization.

In FY19 when India exceeded its rice subsidy limit, Canada, Brazil and New Zealand were “most vocal challengers” of it at WTO. In July this year, too, Canada along with the United States, Japan, and the European Union expressed discontent over the Indian government exceeding its rice subsidy limit.

India should impose 100% plus tarif on all agricultural imports from Canada to safeguard interests of Indian farmers. @JustinTrudeau @DrSJaishankar pic.twitter.com/ujeCtZFOmu

The vile & pro-terrorist @JustinTrudeau opposed income support of ₹6000 to small & marginal Indian farmers. He opposed crop insurance to Indian farmers. But today is he ‘concerned’ about farmers protests. He is a disaster for Canada. pic.twitter.com/hDPGd0g8cs

“In its responses, India reiterated its compliance with the WTO rules, particularly on the Agreement on Agriculture as well as the Bali Ministerial Decision. It maintained the marketing year 2018-2019 was the only year that it exceeded the de minimis support for rice, which explains why it didn’t notify the public stockholding programme for rice prior to that period,” said the trade official.

This not only shows the hypocrisy of Justin Trudeau but also shows that he is as incompetent and ill-advised as Rahul Gandhi. The liberal mascot, who is reaping the benefits of dynastic politics just like Rahul Gandhi, has not learnt any lesson from the Indian tour when he was sent back humiliated for making sympathetic comments towards Khalistan.

A moron of the highest order, Trudeau is not realizing that support for farmer’s protest would not only harm foreign relations with India, but also his domestic trade policies given Canada’s vehement opposition to India at WTO.

“It is not in keeping with diplomatic protocol. Canada has questioned India’s farm policies time and again, along with others like the Americans and Australians. Canadians also act at the behest of their major trade partners at the WTO. But as far as their (Canada’s) trade interest goes, they are not large exporters of farm produce, like the Americans or Australians,” said Jayant Dasgupta, former ambassador of India to the WTO.

Trudeau is supporting the farmer’s protest to get the support of Khalistanis back home. Justin Trudeau and his liberal party in the 2019 elections managed to win 157 seats, down 20 seats from the last elections, in a 338 seat House of Commons. However, a desperate Trudeau took the support of Jagmeet Singh’s New Democratic Party (NDP) and its 24 MP’s. It is imperative to understand that Jagmeet Singh is a hardliner Khalistan supporter and has openly supported the secessionist movement to carve out a separate country for Sikhs in Punjab.

A spineless Trudeau is looking to appease the Khalistan supporters and we shouldn’t be fooled that he is standing with the farmers or for their cause. The farmers are merely a tool for him and his Liberal Party and its Khalistani allies to manifest the dreams of a separate country that seeks to divide India and incite bloodshed.

India is still to condemn the killing of the Iranian nuclear scientist, the message to the world is clear