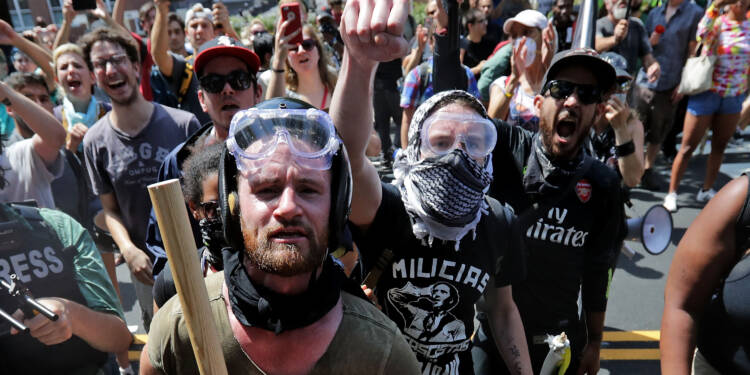 Over a month after the US Presidential election results started turning in, the oldest democratic country on the planet is still embroiled in the controversy as to who has won the elections. While the media declared President-elect Joe Biden continues to crown himself as the next occupant of the White House, his compatriot and the current President, Donald Trump is working around the clock to minimize the damage if Biden somehow manages to reach Washington. However, ANTIFA, a far-left, rabid organization that has an illustrious history of violence, bloodshed, and arson has once again taken to the streets to attack Pro-Trump supporters and fan flames of anarchy, all whilst having the alleged backing of Blue Democrats.

According to several media reports, violence broke out in the streets of Washington DC on Saturday when ANTIFA collided with peaceful protestors from the Trump faction who were agitating against Joe Biden’s alleged election victory that is currently being challenged by Trump in the Supreme Court.

multiple fights break out between #antifa and the Proud Boys as the two groups meet. Cops try to intervene as pepper spray is shot into the crowd. #BlackLivesMatter #MarchForTrump pic.twitter.com/5gykrpzQcN

After the passionate crowd marched in support of Donald Trump and called out the widespread election fraud of the Democrats, the counter-protesters — including members of the ANTIFA — splintered into smaller groups to roam the streets in search of their rivals, in an attempt to inflict serious injuries upon them. It is being reported that the ANTIFA group numbered about 100 people, compared to half that number or less for the Trump supporters. The ANTIFA members started to set off fireworks to disperse the Trump supporters and even jousted with the police officers, leaving a few of them injured on the spot.

#antifa clash with MPD as they push the police line back. after numerous objects are thrown at officers they advance towards protestors where things get intense. #MarchForTrump #BlackLivesMatter pic.twitter.com/gsYq2CwRVM

Consequently, the DC cops made at least 23 arrests. At around 9.20 pm, DC Fire and cops cleared the area outside of Harry’s Bar – a Trump supporter drinking spot – using pepper spray after reports emerged that four people had been stabbed.

Video and pictures from the incident show a member of the Proud Boys lying on the ground and being treated for a stomach wound after confronting the anti-Trump protester. The victims were transported to the hospital, according to the Washington Post, and were said to be in critical condition with potentially life-threatening injuries.

It is not known if the suspect was taken into custody after the stabbing or if they escaped. Eight people in total were taken to the hospital throughout the night, including two police officers and the four people stabbed.

Trump had flown over the site of the protest and given his seal of approval by tweeting, “Wow! Thousands of people forming in Washington (D.C.) for Stop the Steal. Didn’t know about this, but I’ll be seeing them!”

Wow! Thousands of people forming in Washington (D.C.) for Stop the Steal. Didn’t know about this, but I’ll be seeing them! #MAGA

However, the left couldn’t gulp down the march and unloaded its most rabid organization to disrupt the protests. It is a known fact that the far-left is backing the democrats since the beginning and their riot-arm ANTIFA has been in the news since the counting has started.

MAGA March Latest >> This is McPherson Square, close to the White House… Trump supporters are chanting “Whose streets, our streets,” as Antifa protesters are on the other side of the square, moving closer@WUSA9 @CBSNews #MarchForTrump pic.twitter.com/fTmgNhFzNc

ANTIFA was the same organisation that had hijacked the protests triggered after the death of George Floyd in police custody. Cities across the United States then had witnessed regular occurrences of riots and looting. The so-called anti-fascist group had engineered the anarchy that preceded the protests and it was one of the reasons why BLM lost some of its sheens.

African Americans protecting their businesses from #BlackLivesMatter protests. It's the irony of the majority (white) dominated left loonies. They're not alone, we have such people in India too.https://t.co/1rzht27yvD

Read more: ‘The USA is on fire, Black Lives Matter has been hijacked,’ As the left goes berserk, Americans blast George Soros

Whatever the result of the election conundrum of the USA, the far-left cannot take away the right of Trump supporters for what they believe in. Joe Biden, the lynchpin of such groups has been uncharacteristically mum on the entire episode. Biden’s stoic silence gives us a sneak peek of his tenure if he indeed becomes the 46th President of the USA. Radical and fringe organizations that have violence as their core ethos will be given a free rein by the Democrats and that could just be the beginning of the end for the USA as we know.

For the first time China sounds intimidated of the growing India-Australia ties, even admits its fear