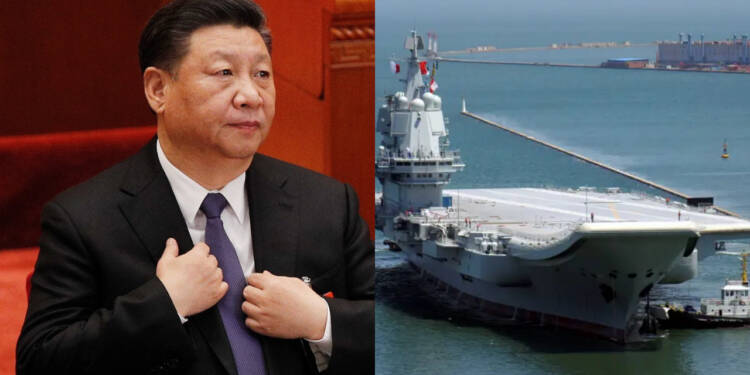 In an embarrassing development for China is the world’s fifth-largest arms exporter, China’s first indigenously developed aircraft carrier, Shandong is still not combat-ready, a year after it was commissioned by Chinese President Xi Jinping himself.

In yet another development which further proves that China is merely a paper dragon who can flex its muscles only in its propaganda outlets like the Global Times, China’s first indigenously developed aircraft carrier, Shandong is fast turning into a major embarrassment for Xi Jinping and his lackeys in the Chinese Communist Party.

A report in the South China Morning Post claims that Shandong after its third sea trial has returned to its homeport of Dalian after a 23-day-long voyage in the Bohai Sea, however, the aircraft carrier is still not combat-ready.

It is pertinent to note that Shandong entered service seven months behind schedule in December 2019 instead of the earlier date of April 2019.

While the reason for non-readiness of Shandong has been placed on the outbreak of the pandemic, which has resulted in mandatory quarantine for the ship’s crew e before boarding and after disembarking, it is clear that there are obvious design and technical flaws in Shandong as the carrier showed flaws since the beginning.

“(It is) still too early to estimate when the Shandong will be combat-ready,” said Beijing-based military expert Zhou Chenming.

In a clear cut sign that Shandong had obvious technical flaws, the aircraft carrier underwent only nine sea trials for 18 months, whereas its predecessor the Soviet-build Liaoning, underwent 10 sea trials in 13 months before it was commissioned.

However, Shandong is not the standalone marvel of Chinese engineering as J-15 fighter jets over the years have been plagued with various technical issues and has been involved in four crashes in the recent past and have proven to be highly unreliable.

It is startling to see how China, which survives on reverse engineering Russian defence equipment, has become the world’s fifth-largest arms exporter, given the poor quality of its equipment.

Recently, China dispatched two of its warships to Bangladesh, however, the warships had a non-functioning navigation radar and gun system with China asking for additional payment from Bangladesh to fix the issues.

When Bangladesh rejected six China-made Y12e and MA60 aircraft, they were promptly purchased by Nepal for its national carrier, however, the aircraft are now lying idle as reportedly they aren’t suited for the region nor are there spare parts available.

Unsurprisingly, China has rejected Nepal’s requests to replace them.

Such is the marvel of Chinese engineering that during the test-firing of Norinco VN-4 armoured personnel carriers, China’s sales representative refused to sit in the vehicle. Kenya nonetheless, went ahead and purchased it which unfortunately resulted in dozens of Kenyan personnel getting killed in those vehicles.