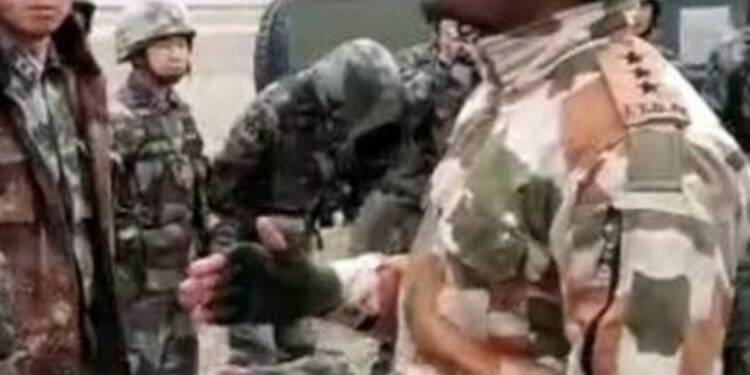 No sooner than the change of guards happened in the White House, Xi Jinping has laid bare his ambitious plans of world domination by creating a neo-colonial world order. According to news reports, Indian and Chinese troops physically clashed once again in the high-altitude area of Naku La in north Sikkim last week. The brawl started after Indian troops challenged the attempt by the People’s Liberation Army (PLA) to intrude into Indian Territory.

Over 20 Chinese PLA soldiers were injured during the clash, suggesting the Indian troops dished some generous offering to the guests trying to unlawfully coerce their way through in the Indian Territory. The Naku La sector, located at an altitude of 5,270-meter, was also one of the original face-off sites when PLA troops intruded into Indian territory at multiple points in eastern Ladakh in early-May last year.

Over 20 Chinese PLA soldiers injured during the Naku La clash near Sikkim border. 4 injured on Indian side. Indian Army patrol had challenged the Chinese patrol which led to the brawl. India has taken up the matter militarily & diplomatically with Beijing. Official word awaited.

After being dormant for 7-8 months, China’s sudden yet renewed vigour to intrude into the Indian camps could be attributed to the rise of a weak, spineless leader like Joe Biden. The American President has made it clear that unlike Donald Trump’s presidential tenure, China would not be attributed as the enemy of the Americans, albeit, like his predecessor Obama, Biden would go at war with Russia.

Sensing the love, support, and care from Biden, the Chinese President Xi Jinping immediately opened up multiple war fronts in less than a week since Biden was inaugurated at the Capitol Hill. While India managed to successfully keep the Chinese at bay by giving them another bout of thrashing, other smaller countries will not be able to brave the Chinese attacks.

Read more: A bold China, a bolder Iran – How USA’s enemies for the last 4 years are rejoicing after Trump’s exit

One might have thought the attacks were a standalone event but the very next day, 15 Chinese airforce planes, including 12 fighter jets intruded into Taiwanese airspace once again.

Sandwiched between the two events was a futile warning from the US to China. Unnerved by China, the Taiwanese Vice president reached out to its regional partners India and Japan among others except for the US, showing a total lack of faith in the ability of Biden’s administration to keep China in control

Also reported by TFI, for the first time and after Biden’s inauguration, China has explicitly granted permission to its coast guard to fire on foreign vessels — a move that could see contested waters around the nation become more volatile. The move is obviously aimed at Japan and all such countries that have stood their ground against the belligerence of China.

While earlier there was a chance for deliberation between the two sides of China and Japan over the disputed waters of the East China Sea and the Senkaku Islands, Jinping has taken more decisive yet disastrous steps in his sheer frustration of losing in every single sector.

Read more: Xi Jinping’s “Open fire on anyone” order to PLA is an open declaration of war with Japan

Going by Biden’s overflowing love for China, he is expected to scale back the trade wars which would ultimately let China go scot-free. The high-pressure environment that the Trump administration had built around China is being dismantled by Joe Biden.

It has not been a week since the Democrats came to the White House and China has given a teaser of what remains in the store for the rest of the world for the next four years. These are ominous signs and the world will have to pay the price for America’s indecisiveness.