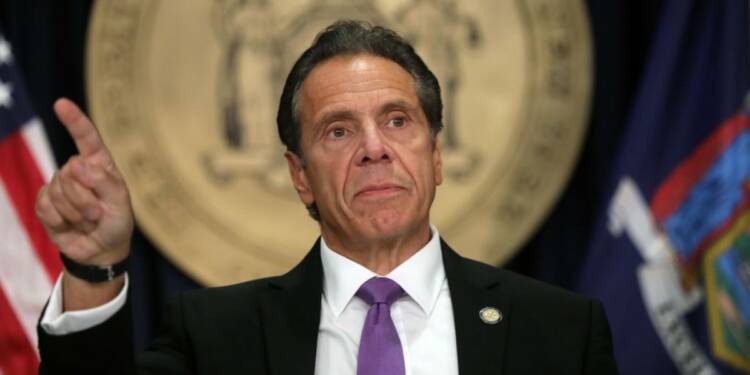 Do you know what is really cringeworthy? The way liberal media props up new icons with little substance and starts swooning over them for no real reason. We are talking about Andrew Cuomo, the Governor of New York, who was getting a lot of favourable coverage from the liberal media when New York was actually failing to control the pandemic.

Now, we know that Andrew Cuomo actually messed up New York’s Coronavirus response. He is now facing a brutal report from his own party’s state Attorney General. The report says that New York had undercounted nursing home deaths from the Wuhan virus. So, either the state administration was too inefficient or there was a cover-up. In either case, Andrew Cuomo comes under the scanner.

But the New York Governor is unfazed. He said, “Look, whether a person died in a hospital or died in a nursing home, it’s — the people died.”

We know that “people died”. But it does matter if they died in hospitals or nursing homes. Because undercounted nursing home deaths reveal how spectacularly New York’s nursing home policies failed. What followed was however even worse and plainly insensitive. Andrew Cuomo said, “Who cares?” His exact words were- “But who cares? 33 [per cent]. 28 [per cent]. Died in a hospital. Died in a nursing home.”

But what was the American mainstream media doing when Andrew Cuomo was butchering New York’s Coronavirus response? They were simply extolling him and even trying to pitch him as a Presidential nominee against Trump.

Liberal media loves Andrew Cuomo and keeps writing good things about him. The media does have a reason to love him- CNN journalist Chris Cuomo is the New York Governor’s younger brother.

During the Pandemic, CNN was busy milking the bromance between the Cuomos. So, the Cuomos would discuss some really important things on the New York Governor’s CNN appearances like who is their mother’s favourite child, who is better at basketball, and whose clothes fit better. You know, all this while people were dying due to the virus in New York.

But it’s not the bromance between the Cuomos that we are all worked up about. it is how the familial relationship was used to pitch Andrew Cuomo as a Presidential nominee which gets a bit over the top.

The brotherly bickering between the Cuomos took the shape of political campaigning in March last year. Chris Cuomo literally tried to pin down his elder brother into saying a ‘yes’ to run for President, while the New York Governor kept saying ‘no’.

Chris Cuomo became his elder brother’s biggest cheerleader and went to the extent of saying, “Obviously I love you (Andrew Cuomo) as a brother, obviously I’ll never be objective, obviously I think you’re the best politician in the country.” He added, “But I hope you feel good about what you did for your people because I know they appreciate it…. I’ve never seen anything like what you did and that’s why I’m so happy to have had you on the show. And I hope you know that.”

Meanwhile, other sections of liberal media kept singing paeans for the New York Governor. For that matter, Chris Cuomo’s CNN colleague Chris Cillizza could hardly contain his enthusiasm about Andrew Cuomo. He had once said, “Thrust into the national spotlight by his state’s status as the epicentre of the coronavirus outbreak in the United States, New York Democratic Gov. Andrew Cuomo has rapidly become one of—if not the—single most popular politician in the country for his handling of the pandemic.”

If Andrew Cuomo was, by any chance, questioned about New York’s Coronavirus response, Andrew Cuomo used to bristle and be dismissive. At one point, Cuomo even went on to abdicate all responsibility. He said, “Where were all the experts?” and insisted that “governors don’t do global pandemics.” Such was the level of callousness that the New York Governor even refused to quarantine New York City at the peak of the pandemic in March last year.

There are clear indications that Andrew Cuomo failed in face of the Coronavirus health emergency in New York. But it is the liberal media which actually made him a hero, whereas it should have been questioning his uninspiring leadership and incompetence.