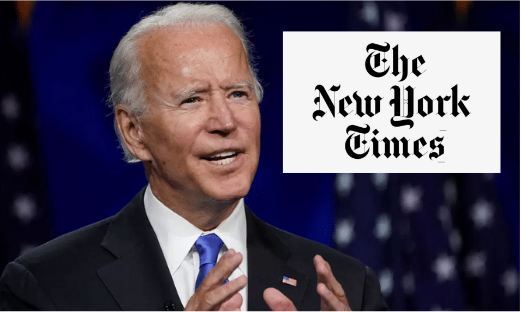 New York Times has an Orwellian dream, which frankly sounds quite unoriginal. So, one of the biggest pro-Democrat media houses in the United States of America wants a ‘Ministry of Truth’, headed by a ‘Reality Czar’ to handle ‘misinformation’. Sounds familiar? It must, if you are a George Orwell fan.

Yes, NYT, the wannabe newspaper of record has used the term “reality czar” while asking the US President Joe Biden to lead the fight against “disinformation and domestic extremism.” NYT wants an agency of “experts” that will turn the heat on those who create “the reality crisis”. Now, we can’t help but point out that NYT’s dream seems erringly similar to the ‘Ministry of Truth’ envisaged by George Orwell’s Nineteen Eighty-Four: A Novel, which is often published as just 1984.

There is an attempt here to silence voices that dare disagree with the mainstream American media. NYT columnist does admit, “It sounds a little dystopian, I’ll grant.” Yet, he says, “but let’s hear them out.” Yes, let’s hear them out, because after all, it is only the oldest democracy in the world at stake. And when it comes to the mainstream media’s deemed truth, it would be an affordable cost.

So, what will the “reality czar” do? Roose says that the “tip-of-the-spear” task force could hold regular meetings with social media platforms, where people say what they want- you know without any regard for what the mainstream media believes to be the only truth. The task force could then demand “structural changes” that could as far as violating the privacy of customers under special government exemptions.

And you know once you start violating privacy of customers in the world’s oldest democracy, the “experts” would also have to be given peeks into those “black-box algorithms” on Twitter, Facebook, etc. in order to “open the hood on social media” and launch fishing and roving inquiries into those who offend the deemed reality.

And just so that we are clear, we say that the idea of a “reality czar” sounds unoriginal, because the Ministry of Truth in George Orwell’s 1984 also happens to control all forms of information- news, education, entertainment and art. The purpose is to delete old historical records and publish new information, so that history is brought in line with Big Brother’s current pronouncements. Big Brother is, of course, portrayed as the dictatorial leader of Oceani, a fictional totalitarian State in Orwell’s 1984.

Presently, NYT has the self-proclaimed authority of serving truth to the Americans and Joe Biden is the President of the United States. We are not saying that Joe Biden is the Big Brother, but at least NYT seems to desire an Orwellian ‘Ministry of Truth’. The only missing link is the ‘Ministry of Truth’, so NYT wants a “reality czar”. So, what has to be controlled? There are many “collective delusions” that have to be corrected.

Going ahead, there could be many more delusions which may need to be weeded out. For example, the “reality czar” could decide to correct the ‘collective delusion’ that Trump was elected by the people of the United States. Rather, the “reality czar” would want people to believe that the Russians got him elevated to the White House.

This is actually a watershed moment in American history. Some very influential people within the oldest democracy of the world want a poetical Orwellian turn and that too not in a very good way.

Greta was propped up by anti-India outfits to malign PM Modi. She exposed herself and her patrons with a silly tweet