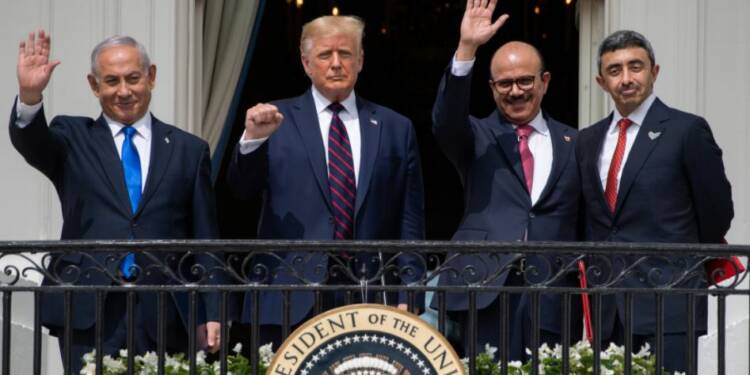 The Biden administration has been trying to ruin US-Israel ties ever since it came to power. Biden has been trying to isolate Israel and fade it into irrelevance within the Middle East. This is why the US President has cozied up to Iran, apart from trying to reinvigorate the Palestine issue which had become a ‘secondary issue’ in the Trump era.

However, two major US allies- the UAE and Bahrain, are defying Biden’s outrageous Israel policy. The Arab nations are sticking with Trump’s Israel first policy, in a major thumbs down to Joe Biden. As per latest reports, the UAE and Bahrain have cut down funding for the UN agency for Palestinian refugees, despite Biden’s decision to restore aid to Palestine. This is being seen as a follow-up to the normalisation agreements dubbed Abraham Accords that were brokered between Israel and Arab nations by Trump.

Now, the richest of Arab nations are clearly at loggerheads with the United States over the issue of Israel and Palestine. In January,  Washington’s interim UN envoy, Richard Mills, had asseverated that President Joe Biden wants to  “restore US assistance programs that support economic development and humanitarian aid for the Palestinian people.”

Even though Mills did not refer explicitly to UNRWA, it did become clear that Joe Biden was simply desperate to bring Palestine back into limelight all over again. Yet, the UAE and Bahrain are ruining Biden’s Palestine dream. Ironically, the Arab nations which have traditionally been very sensitive about the Palestinian cause are reluctant to let the contentious issue take primacy. Therefore, they are pushing back against a pro-Palestine US President.

While Trump was in power, Israel was benefitting from unabashed American support. Given the American goodwill that came along with Israel, everyone wanted to befriend the Jewish nation. Even the Arabs, that used to keep a safe distance from the Jewish nation due to theological obligations, ended up befriending it.

But Biden is hardly treating Israel like an ally and hinting towards dropping sanctions on Iran and getting back into the Iran nuclear deal. He is yet to call Israel’s Prime Minister Benjamin Netanyahu in a perceived attempt to isolate the Jewish nation. The Biden administration would have thought that lack of American goodwill would again reduce Israel into a pariah state within the Middle East.

However, the UAE and Bahrain are making Biden realise that even in the absence of American backing, the newfound Arab-Israel friendship is here to stay.

It is said that the next big war is going to take place in space, but Biden is undoing Trump’s space command ambitions