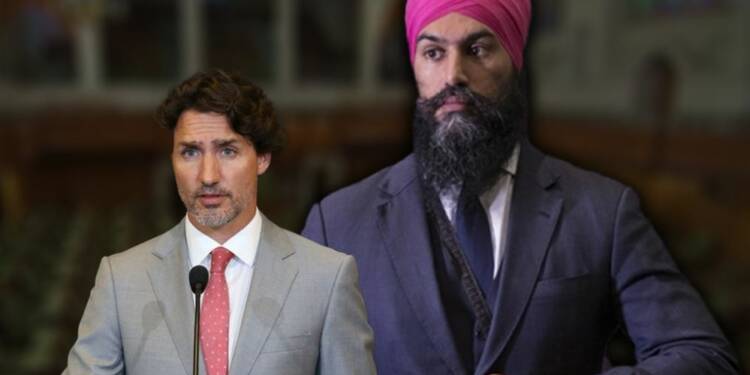 During a press conference on Wednesday morning, Canadian PM Justin Trudeau was asked a simple question, “Have you reached out to Prime Minister Modi or will you be reaching out to Prime Minister Modi to ensure Canada can get (vaccine) supply from India?” Even though it was a yes/no question, he failed to provide a direct answer and instead talked about working with India to fight the pandemic. But only hours later, to the surprise of the Canadian people, they received the answer to their questions from a tweet posted by Indian Prime Minister Narendra Modi.

It was clear from PM Modi’s tweet that Justin Trudeau had called him, and Narendra Modi gave his assurance that India would do its best to facilitate supplies of COVID vaccines sought by Canada. The Canadian media and people were confused. Was it because of the constant pressure from conservatives and the opposition that he called? Why did Justin Trudeau shy away from answering the question directly when asked by the reporters? And why did he take so long to call Narendra Modi even when Canada is desperate for vaccine supplies?

Canadians get answers from India that they can't get from their own prime minister.

Look at what Canada is saying about India and PM Modi. They should also understand who is dragging down Indo-Canadian ties. It's the Khalistan sympathisers. https://t.co/qmuRrMOzde

Unsuspecting Canadians may believe that Trudeau is just a bad administrator who is not good at diplomacy. But the undercurrents of Canadian politics hold the key to the real answers. You see, Indo-Canadian ties are in the doldrums and Justin Trudeau cannot face the Indian Prime Minister, all for one reason: Khalistan sympathisers and their main man, Jagmeet Singh. Behind all the facade put up by the liberal government under Trudeau, is a nexus of Khalistan sympathisers who want to carve out a separate state out of India through terrorism. Jagmeet Singh may deny the connection to these elements, but his views and his company give away his leanings. He is no friend of India, and he has Trudeau’s government by the neck.

Justin Trudeau’s Liberal Party is holding on to power with a minority government and the support of Canada’s left-leaning New Democratic Party (NDP), which is led by Jagmeet Singh. His support is paramount for Justin Trudeau to be in power.

Justin Trudeau has from time to time given voice and stage to many overt and closet Khalistanis, an extremist fringe within the Sikh community that calls for secession from India and who endorsed the use of political violence as a “legitimate form of resistance”. Be it Harjit Sajjan, or Jaspal Atwal who was clicking photos with Justin Trudeau during his disastrous 2018 visit to India, the list of Khalistan sympathisers involved with Trudeau is long.

However, now he seems to be dancing to the tunes of Jagmeet Singh. It is said that we should not judge a book by its cover and this fits perfectly for NDP leader Jagmeet Singh. His Saint-like appearance and soft-spoken words may make anyone Indian or otherwise, swoon over him, but his agenda is sinister. A report in The Globe gave details of Mr Singh’s appearances at two different events promoting Sikh separatism. At one of them, he talked as if India were his own homeland. In a speech he gave there, he accused India of “genocide,” and described it as something that happened to “us.” His use of the first person was striking. He described India as “our country where we live” – a startling use of language for a born-and-bred Canadian politician.

Earlier when the CBC’s Terry Milewski pressed him hard on his views of the 1985 Air India bombing – the worst terrorist attack in Canadian history – Mr Singh refused to blame the bombing on Sikh extremists. “I don’t know who was responsible,” he said. These factors give us an obvious understanding of who Mr Jagmeet really is and where his loyalties lie.

Jagmeet Singh is the one who is making Justin Trudeau toe the Khalistani line against India and forced him to make statements on the farmers’ protests and internationalise the issue to corner India. It is even alleged that a PR agency linked with Jagmeet Singh has been paying celebrities huge sums of money to tweet about the farmers’ protests and destabilise the situation in India, one example being Rihanna.

Read more: Trudeau was forced to eat crow and dump his separatist supporters to get help from Indian Prime Minister Modi.

If a Canadian ever wonders what’s the reason behind the terrible relations between India and Canada despite the diaspora and cultural proximities, they must be clear that it is for the Khalistan sympathizers like Jagmeet Singh who spare no opportunity to try to destabilise India and cause a rift between the Sikh and Hindu communities in India. Justin Trudeau is leading a minority government and Jagmeet Singh is controlling him on his foreign. This is detrimental to Canada, and the near failure of Canada’s coronavirus vaccine drive is the result of this.