Destiny is calling Microsoft to create parallel Facebooks and Twitters, and looks like Microsoft has already begun 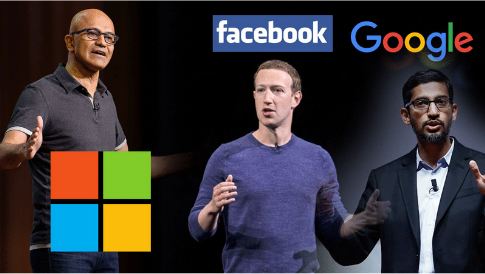 The social media bans on former US President Donald Trump following Capitol security breach has created a global outrage against big tech. Google, Facebook and Twitter- the three main data giants are facing unprecedented tussles with some democratically elected governments. But there is one big tech company which is benefitting out of this situation. We are talking about Microsoft, a Big Tech giant which is ready to comply with government regulations and replace those who push back against regulations.

Microsoft is ready to provide an alternative. And it has started from Australia. The Scott Morrison government in Australia has been at loggerheads with Google and Facebook. Canberra wants them to pay news outlets for publishing stories online. The two Big Tech giants don’t want to pay. No surprises here. But the two tech giants went a step further and threatened to stop key services in Australia. Google too has threatened to turn off its search engine in Australia.

Google’s threat to turn off its search engine is an extreme step. The search engine is what makes Google special. It has also become a part of human life in almost all countries, including Australia. But this is where Microsoft has offered to fill the void if Google effectuates its threat of turning off the search engine.

Microsoft President Brad Smith has said that his company backs the proposed legislation in Australia compelling Facebook and Google to pay media for their journalism.

So, Microsoft is ready to offer its search engine, Bing if Google walks off in protest. Further, Microsoft wants what happened in Australia to be replicated across the world.

Smith wrote a blog post which reads, “This has made for an unusual split within the tech sector, and we’ve heard from people asking whether Microsoft would support a similar proposal in the United States, Canada, the European Union, and other countries.” The Microsoft President added, “The short answer is yes.”

Microsoft has a message for democratically elected governments- journalism needs to be compensated by big data. And if big data companies don’t pay, kick them out. Microsoft is cashing in on the fight between democratic governments and big tech. It is telling the world that it is ready to conform to the rule of law and government regulation.

The real ambition of Microsoft is to correct its inherent imbalances. Microsoft is a brilliant software company. Its global footprint in the tech sector is still unmatchable. Its Windows OS and utility applications like Word, PowerPoint, Excel and Outlook Email Client are yet to find a worthy alternative.

Yet, Microsoft hasn’t been able to fully capitalise upon its excellence in software applications. Microsoft lags behind Twitter, Facebook and Google in the data segment. Microsoft’s search engine, Bing simply fails to compete with the Google search engine. The quality gap is probably just as huge when we compare Microsoft’s Internet Explorer with Google Chrome.

Also, Microsoft has no footprint in the social media sector, which is also why it wanted to buy out TikTok and compete with applications like Facebook and Instagram.

But now with political issues, Microsoft has a real chance of becoming the biggest big tech company. Google has had a fallout with the Australian government and Microsoft wants to amplify it so that it can create more space for pushing through Bing and probably even the Internet Explorer. Microsoft is placing its bets on democratic governments, which are positioned to come out victorious in the ongoing controversies surrounding data companies.

Apart from Google, Facebook and Twitter are also facing some major controversies. Twitter, for example, shows a tendency of banning conservative faces left, right and centre. Facebook too is not free from ideological bias.

Only on Friday, it was reported that Twitter permanently suspended the account of a conservative activist group, Project Veritas. The reason for the extreme action was rather unusual- the conservative organisation had released a video in which a reporter was questioning a Facebook Vice President Guy Rosen. Project Veritas denied that it had published Facebook executive’s private information.

What Microsoft can therefore do is to diversify itself like never before. By lobbying for rules that compel Big Tech to compensate media organisations across the world, Microsoft is trying to create space for itself.

Microsoft is ready to pay a fair share of its revenues to those who deserve it. Microsoft is looking to diversify itself by providing an alternative to Google- the biggest internet giant. And it could also be looking at creating new social media alternatives.

It is only a matter of time before Microsoft starts cashing in on the delicate situation. As such, the tech giant would want to create a parallel set of entities across different domains from social media to search engines and web browsers.

As a part of its new battle against the rest of Big Tech, Microsoft is accepting the new narrative that domestic laws and democratically elected governments have the final say. It doesn’t propose to create giants that end up becoming self-acclaimed free speech judges. Destiny is calling Microsoft to build parallel Facebooks and Twitters, and the Big Tech company may have already started doing that.