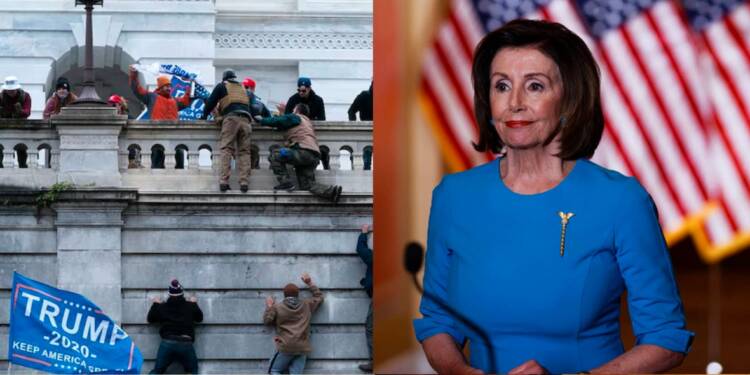 The Capitol siege started with a backlash against former US President Donald Trump. But now it is becoming a contentious political issue. Now House GOP leaders are asking questions of Nancy Pelosi about security decisions in the run-up to the Capitol siege. On Monday, several ranking House members sent a letter to Pelosi, the House Speaker, and asked her to answer “many important questions” regarding security decisions before Capitol riots.

The Republicans pointed to a claim by former Capitol Police Chief Steve Sund that he had approached the sergeants at arms on January 4, that is, two days before the Capitol siege, with a proposal to request the assistance of the National Guard. As per Fox News, Sund also wrote a letter to Pelosi last month, in which he disclosed that the former Sergeant at Arms Paul Irving expressed concern about “the optics” and didn’t feel the “intelligence supported it.”

House GOP leaders also wrote, “As you are aware, the Speaker of the House is not only the leader of the majority party but also has enormous institutional responsibilities.” They added, “The Speaker is responsible for all operational decisions made within the House.”

Republican leaders are really looking to grill the House Speaker Pelosi over the issue and also asking her to come clean on the serious security breach. The House GOP leaders added that over the past two years, they have observed a “very heavy-handed and tightly controlled approach to House operations that has been exerted by yourself, your staff, and an army of appointed House officials.”

Finally, they asked some pertinent questions from Pelosi. The Republican leaders wrote, “When then-Chief Sund made a request for national guard support on January 4th, why was that request denied?” They added, “Did Sergeant at Arms Paul Irving get permission or instruction from your staff on January 4th prior to denying Chief Sund’s request for the national guard?”

Questions are being raised outside the house too. Rep. Jim Jordan tweeted, “Capitol Police requested National Guard help prior to January 6th. That request was denied by Speaker Pelosi and her Sergeant at Arms. During the attack, Capitol Police made the request again. It took over an hour to get approval from Pelosi’s team!”

That request was denied by Speaker Pelosi and her Sergeant at Arms.

During the attack, Capitol Police made the request again.

It took over an hour to get approval from Pelosi’s team! https://t.co/ctOWZ4PExw

Pelosi’s office has however failed to give a satisfactory reply to the questions raised by the ranking members. All that her office has managed is an arrogant reply that actually leaves most of the questions unanswered.

In a rather political reply, Pelosi’s office said that House Republicans, who wrote the strongly worded letter to Pelosi, were “clearly” trying to “deflect responsibility for the Capitol attack from Donald Trump.”

Pelosi’s deputy chief of staff, Drew Hammill, told Fox News that the Speaker “has and will continue to take action to ensure accountability and enhance the security of the Capitol.”

And then, Hammill also tried to pass a judgment on the character and intent of the GOP leaders who questioned Pelosi. Hammill said, “Two of the four House Republican ranking members voted to overturn the results of a fair election, just hours after the Capitol was sacked by an insurrectionist, right-wing mob – a mob incited by Trump.”

Then he added, “A full 65% of House Republicans joined them in voting to undermine our democracy. All four ranking members also voted against holding Donald Trump accountable for inciting the mob.” Finally, Pelosi’s deputy chief of staff said, “Clearly, the security of our Capitol and democracy are not the priorities of these ranking members.”

So, basically, Pelosi believes that House GOP leaders cannot ask any questions about how the House Speaker is discharging her functions. A lot many questions remain unanswered and the unconvincing reply coming from Pelosi’s office only makes the situation more intricate.