As Texans freeze without power and deal with contaminated water, Democrats blame fossil fuel for the mess 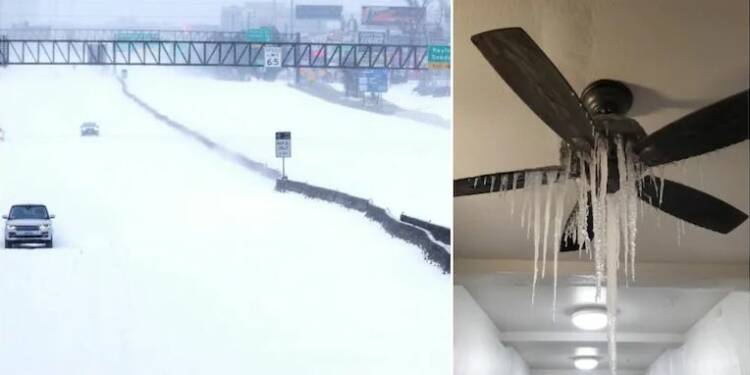 While Texas faced one of the worst power outages due to a severe cold snap in recent times, the White House was busy pushing its agenda on green energy and climate change. Instead of getting actively engaged to address the situation, the Biden administration politicized the situation. While all of this was happening, it was the Texans who suffered.

More than 4 million were left without power in Texas after a rare deep freeze forced the state’s electric grid operator to impose rotating blackouts because of higher power demand. The extreme weather claimed the lives of at least 56 people with a growing toll of those who perished trying to keep warm.

Former Texas Governor Rick Perry had warned, “Those watching on the left may see the situation in Texas as an opportunity to expand their top-down, radical proposals.” And that is exactly what the White House did.

While the condition in Texas worsened as the traditional power grids implemented rolling blackouts to keep the houses alight, non-conventional energy sources such as the windmills froze, crippling the power supply. But the White House will have none of it.

White House spokeswoman Jen Psaki, pushed back on claims made by conservative politicians and pundits blaming renewable energy sources for widespread power outages in Texas in the wake of this week’s unprecedented winter storms.

During the White House press briefing Psaki said, “There have been some inaccurate accusations out there — I’m not sure if former Energy Secretary Perry made these — that renewables caused failures in Texas’s power grid.” She added, “Actually, numerous reports have actually shown the contrary — that it was failures in coal and natural gas that contributed to the state’s power shortages. And officials at Electric Reliability Council of Texas, which operates the state’s power grid, have gone so far as to say that wind and solar were the least significant factors in the blackouts.”

During the briefing, a reporter, Ken Thomas asked, “Dr Sherwood-Randall, what additional steps can the federal government take to relieve the power grid in Texas? I understand that the Energy Department could use some kind of emergency authority to connect Texas to the national grid. Is that under consideration?”

Dr Sherwood Randall, Homeland Security Advisor, replied, “So that’s — that is actually not something that is physically feasible at this time. We have already seen the Energy Department take the decision to enable Texas to use generation capabilities that otherwise would be constrained by regulation having to do with what is emitted by those sources of supply in those generation facilities. So, essentially, to relax some of the standards on — in an emergency for pollution so that they can generate sufficient power while some of their sources are offline or reduced.”

Fifteen years ago, there were virtually no wind farms in Texas. However, last year, roughly a quarter of all electricity generated in the state came from wind. And this is one of the reasons why Texas currently finds itself in a soup. The muddling, virtue-signalling policies of the Democrats have caused the current impediment Texas finds itself in.

Instead of providing the necessary help needed the White House has resorted to mudslinging while US citizens face death in a severe power blackout and rare cold weather which has already claimed lives.

Ceiling fans inside houses have formed icicles, cars have been stuck on streets for hours due to icy roads, shops and restaurants remain closed due to the weather and the power outage and the best the federal government does is send a few blankets and power generators.

By all means, the Biden administration should implement laws and push their agenda the likes of which it has been voted for. But to do so in the midst of a two-layered crisis, Covid and the cold-snap, is irresponsible and unexpected of an administration that says it wants to heal America. How can you heal when you refuse to grow above party lines to help your own citizens in their time of peril.