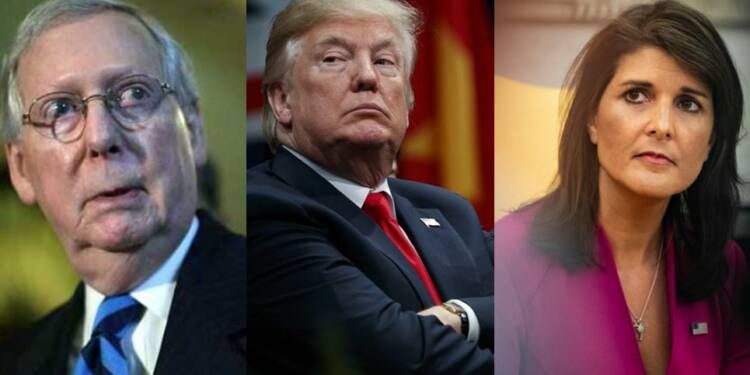 After having lost the US Presidential polls, Donald Trump has started proceeding very cautiously. Recently, there were reports about the former US President’s plans to launch a new party titled the Patriot Party, but after the impeachment trial failed, Trump’s approval ratings in the GOP shot up as Republicans are aware of his strengths come 2024 elections. So, only Trump knows if he will launch a new party or not. But one thing is for sure- Donald Trump isn’t going to let his archnemeses within the Republican Party stay in charge of affairs.

A new POLITICO report encapsulates how Trump has gone largely incommunicado presumably as a part of his future political strategy. Now, Trump has no chief of staff to keep track of his calls, nor does the former US President have a regular, predictable routine.

And not only is Trump holding back, but he is also rejecting meetings with House and Senate GOP candidates. The most prominent of his snubs, however, has to be the refusal to meet South Carolina Governor Nikki Haley.

Haley was once a close aide of the former President. She even served as the US Ambassador to the UN during the Trump administration. However, things have gone awry between Trump and Haley, of late. Trump realised how Haley was trying to sideline him. In a recent interview with POLITICO, she criticised Donald Trump over the Capitol security breach and declared that he “won’t be in the picture” for the 2024 Presidential race.

Nikki Haley is herself a 2024 hopeful and quite clearly, she is looking to pin down Trump at a time when the former US President is facing relentless propaganda from his opponents. Trump snubbed her at a time when Haley was supposedly looking to mend fences with Trump, as she went a bit too far in criticising him and probably enraged the MAGA voter base of the Republican party.

However, by refusing to mend ties with Haley, Trump has signalled that he will show no mercy towards those who pose a threat to his leadership and 2024 Presidential ambitions.

In fact, the former President is looking at a complete cleanup. As per people familiar with Trump’s future plans, the former US President will soon begin vetting candidates at Mar-a-Lago. His objective is to exact revenge upon those Republicans who scorned him and to ensure that every open GOP seat in the midterms next year has a MAGA-approved candidate contesting for it.

Trump is, in fact, eager to exact revenge upon critics like Senate Minority Leader Mitch McConnell and House or Senate GOP leaders who voted in favour of Trump’s impeachment in Congress. Trump has gone as far as insinuating that McConnell’s “lack of political insight, wisdom, skill, and personality” has jeopardized GOP candidates.

Trump also vowed to recruit rival candidates “who espouse Making America Great Again (MAGA) and our policy of America first” wherever he feels the necessity to bring up such challenges. The former US President wants to oust House GOP members Fred Upton and Liz Cheney, both of whom voted to impeach Trump.

The message is loud and clear- Trump is not the one to forgive and forget. At least, he will not forgive those Republicans who joined hands with the Democrats in an utterly vindictive attempt to impeach him and end his political career. He will actually root out such GOP leaders and establish a set of new leaders who are loyal to the MAGA base.

A person close to the former President has been quoted by POLITICO as saying, “If you’re Trump, you don’t gotta play nice with these people anymore. You don’t have to do the whole fake political thing where you pretend to like people you don’t actually like.”

So, Trump is putting all his weight behind the 2022 midterms. And he has only one goal in mind- rid the GOP of his archnemeses.