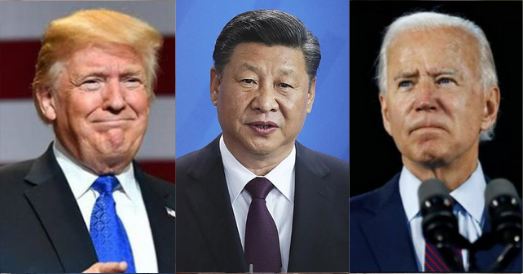 The former President of the United States, Donald Trump had laid down many landmines so that his successor had to traverse the foreign policy route that was pre-determined by him. However, Joe Biden has come to the office with the worst mentality that a Head of State could have. He is willing to compromise the security of his allies and stability of their respective regions, just to prove that Trump wrong and feed his ego. However, in the process, he has stepped on the biggest landmine of all. He is now moving towards rescinding the ‘genocide’ tag on China.

Joe Biden, in a Presidential town hall organised by CNN, came in support of Xi Jinping and instead of outrightly criticising the gross human rights violation in Xinjiang, went to the extremes of justifying the Chinese actions. Biden outlined his latest phone conversation with Chinese President Xi Jinping, describing the reasoning of the Communist leader for rounding up the Uighurs as if he were protecting an old comrade who was misunderstood. The US President also went to extremes and recalled the time when he flew with Xi for 17,000 miles signalling that there is no love lost between the two leaders.

This must have come as a surprise to even those in the Biden administration, as US Secretary of State, Antony Blinken had endorsed Trump’s China policy, saying “Trump was right to take a tougher stance against China.” To which the Chinese newspaper –The People’s Daily had expressed its concern and said that “the Biden administration cannot solve the American problem.”

Read more: Biden’s Secretary of State Antony Blinken seems to be a Trump fan, or rather Pompeo 2.0.

Old age seems to have taken a heavy toll on President Biden as he is not able to differentiate adversaries from allies and is still clinging on to the past with no consideration to the present. While speaking in Wisconsin at a CNN town hall, President Biden went on length in what appeared to be an explanation and justification of Xi Jinping’s actions in Xinjiang. He said, “Chinese leaders, if you know anything about Chinese history, it has always been – the time when China has been victimized by the outer world is when they haven’t been unified at home.”

Read more: ‘Xi is bringing a uniting tightening control in China,’ Biden justifies the Uyghur genocide by downplaying it

While the US administration is promising the allies in Indo-Pacific and Europe about the consistent foreign policy of the United States and its commitment to their safety and security, President Joe Biden is busy appeasing Xi Jinping and the concerns of its media and proudly flaunting that he had a two-hour-long conversation with the Chinese President like a die-hard fan.

It is turning out the Donald Trump and his administration knew Joe Biden better than the people working in the Biden administration itself. Joe Biden is committing political suicide by laying the groundwork for removing the genocide tag from the Chinese Communist Party for their continued atrocities in the Xinjiang region under the guise of mere cultural difference. Donald Trump’s political acumen has made sure that Joe Biden will show his true colours this early in his Presidential spell and alerted all the allies to brace for the impact.