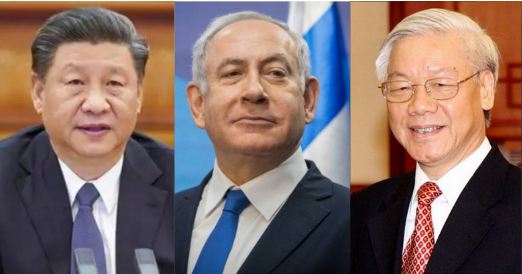 Sensing danger to its sovereignty from the authoritarian country of China in the contested international waters of the South China Sea, a gutsy Vietnam has mounted a spirited defence by militarising the Spratly Islands — thereby giving a solid answer to China’s ambitions of neo-colonial misadventures. However, an interesting development has emerged amid the hullabaloo of Chinese encroachment near the archipelago as Israel seems to have thrown its weight behind Vietnam in countering the Communist menace.

As reported by TFI, in an attempt to shore up the defence of the island, Vietnam carried out intricate military work at Pearson Reef and Namyit Island by adding additional radomes-dome-shaped structures used to shield radar antennas and other administrative buildings. Moreover, newer and longer-range gun systems, including artillery rocket systems purchased from none other than Israel, have been mounted on Vietnamese outposts in the island chain.

Military-security cooperation in the form of the arms trade, as well as technology transfer and licensed production, has emerged as an important dimension of Israel’s relations with Southeast Asian countries and especially Vietnam.

As documented in the SIPRI database, between 2014-2018, Vietnam was one of Israel’s largest arms customers. Whereas between 2006-2018, Vietnam imported Spyder and Derby missiles, ELM-2288/ER, ELM-2022 air defence radars, and Python-5 beyond-visual-range air-to-air missile (BVRAAM) from Israel.

With Trump and Netanyahu sharing excellent personal chemistry, Israel became an increasingly active player in the region. Of Israel’s total global arms exports in 2018 (worth $7.5 billion), 46 per cent were purchased by Asia-Pacific countries.

However, with Trump gone, Jerusalem has not slowed down in the work and continued to deliver the arms to Hanoi to battle an increasingly hostile enemy in Beijing. One can make no bones that the arms trade lies at the centre of Israel-Vietnam bilateral cooperation.

Furthermore, the Quad nations have been helping Vietnam shore up its defences in the region as well. Last year, Japan announced that it will provide the Vietnam Coast Guard with six patrol boats in a lease-financing deal worth 36.6 billion yen ($345 million).

The vessels would help Vietnam in countering China as fishing boats supported by the PLA Coast guard vessels have been forcing out Vietnamese fishermen from their own waters. There have been several skirmishes between the two sides in the last one and a half years. The decision of Japan came months after the US had delivered six patrol boats worth $12 million to Vietnam as well.

Moreover, New Delhi and Hanoi have been in the advanced talk stage, with the latter hopeful of buying the supersonic cruise missile Brahmos, in addition to the Akash air defence system and the Dhruv helicopters. And if media reports are to believed, the first high-speed patrol boat being built for Vietnam under the $100-million Line of Credit (LoC) will be delivered by September, according to manufacturer L&T.

Vietnam is an important player in the grander scheme of things for Quad. Unlike the rest of the smaller ASEAN nations, it is Vietnam that has time and again shown the grit to take on China by standing up to its face. Whether it be on the military or economic front, China stands to lose a lot if it squares up against Vietnam entirely.

Most of the manufacturing units have deserted mainland China after disruption in the supply chain market due to the COVID-19 pandemic and the Sino-US Trade wars have either gone to Vietnam, India or other Southeast Asian nations. As reported by TFI, Apple has been planning to shift its laptop (MacBook) business to Vietnam whereas the iPad business to India.

As all other countries of the southeast region were trying to placate the CCP and Xi Jinping by buying a namesake COVID vaccine, with just above 50 per cent efficacy, Vietnam was the only country that was neither buying the Chinese goodwill and nor its vaccine to the extent that ASEAN’s other member countries are buying. It rather took a more diverse approach by engaging in negotiations to buy products from Britain, the US, and Russia.

And if we talk about defeating China in conventional warfare, then also Hanoi holds the upper hand. In the 1979 Sino-Vietnamese war, Vietnam managed to nullify China and its ambushed attack and managed to give a bloody nose to the wussies of the PLA.

Thus if China thinks it can outlast Vietnam in a war with its supposed mighty and advanced military, then it should take a customary gander at the history.

Even the mighty Americans could not breach Vietnam and now with Israel and the Quad at its side, Beijing’s reveries might just remain a pipe dream.