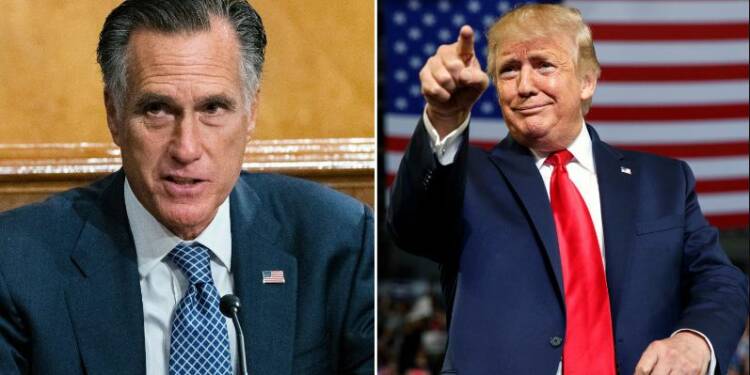 After a failed attempt to impeach Trump, Utah Senator, Mitt Romney has conceded defeat in the face of Trump’s rising popularity. Romney has conceded that no one in the GOP can defeat Trump and if the former US President does decide to run for the nomination he will win by a landslide.

In a virtual interview with the New York Times-Deal Book, the Utah Republican said “surely” that in the next few years the former president will play a role in the GOP – assessing that Trump has “by far the biggest influence in my party.”

“I expect he will continue playing a role. I don’t know if he’ll run in 2024 or not. But if he does, I’m pretty sure he will win the nomination,” Romney said.

He added, “I look at the polls and the polls show that among the names being floated as potential contenders in 2024, if you put President Trump in there among Republicans, he wins in a landslide.”

The remarks by the Senator are a clear acknowledgement by one of the former President’s most prominent critics on Trump’s staying in power within the Republican Party.

Romney was the only Republican senator to vote in favour of conviction against Trump for his dealings with Ukraine in his first trial last year. Earlier this month, Romney and six other GOP members held the former President responsible for the January 6 rebellion in the Capitol.

Senate Minority Leader Mitch McConnell also claimed that the previous chair was “morally and literally responsible” for the attack when he voted to acquit Trump in his second trial.

For the statements Mitch made after the impeachment trial, Trump is eager to exact revenge. Trump has gone as far as insinuating that McConnell’s “lack of political insight, wisdom, skill, and personality” has jeopardized GOP candidates.

As per people familiar with Trump’s plans, the former US President will soon begin vetting candidates at Mar-a-Lago. His objective is to exact revenge upon those Republicans who scorned him and to ensure that every open GOP seat in the midterms next year has a MAGA-approved candidate contesting for it.

Trump has gone as far as rejecting meetings with House and Senate GOP candidates.

Maybe Mitt Romney got the air of what will happen to him if he continues to attack the former President. In recent weeks, high-ranking Republicans in Congress have largely tempered their criticism of Trump, as the party comes to grips with Trump’s continued success among GOP voters and the resilience of his political base.

Both House Minors Chief Kevin McCarthy and House Minority Whip Steve Scalise (R-La.) made pilgrimages to Trump’s Mar-a-Lago resort in Florida, home to the former president, and Trump is scheduled to speak at the first important address after leaving the office at the annual Conservative Political Action Conference.

57% of the Republican voters said they want the former US President to play a significant role in their party going forward, according to a flash POLITICO/Morning Consult poll conducted in the days after his second impeachment trial, and 80 percent of Republican respondents said they regarded him favourably.

Asked who they will endorse in the 2024 GOP presidential primary, 53% of the Republicans surveyed said they would back Trump. With 12% Republican support, former Vice President Mike Pence came in second, and all the other candidates were polled in the single digits.

Unlike Mitch McConnell, whom Trump attacked openly, Trump never made a statement on Mitt Romney. Despite being one of the Republican’s senior leaders, Romney was never mentioned by the former President. Trump’s rising popularity and the view of the GOP publicly made Romney fall to his knees and now he can only hope for forgiveness to save his political career. By voting to convict Trump he made a political and career suicide, now he is trying to mend his ways.