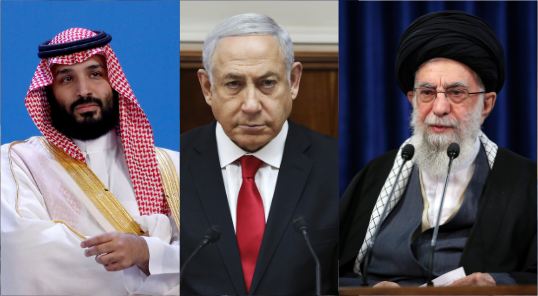 Iranians are in a very sorry state. On the one hand, they are proud people representing a really old and continuing civilization state, and on the other hand, are currently represented by an incompetent regime that is misleading them towards imminent chaos. The latest missile attack on the base housing U.S. and other coalition troops in western Iraq on Wednesday has increased the chances that US might too stop the appeasement soon. Thus, in the face of the imminent threat of an Israel-Arab alliance and an aggressive retaliation to the latest missle attack on the US base in Iraq, Iran realised the folly of aggressively pursuing its dreams on the basis of the USA and west’s intent to bring Iran back into the Nuclear deal.

A potential roadblock to talks between Iran and the US on the future of the nuclear deal has been cleared after the UN nuclear inspectorate said it had won Iran’s agreement to return to Tehran to hold focused talks on doubts over the veracity of the country’s previous declarations about its nuclear sites. This comes after Tel Aviv was discussing a possible military alliance among the Abraham Accord countries and the possible participation of Saudi Arabia too. Tehran has realised that any further escalation than it has already done, would unite the whole Middle East against Iran entirely.

While the latest news of at least 10 rockets slammed into a base housing U.S. and other coalition troops in western Iraq provide a fertile ground for tit for tat escalation, two developments show us the sign of a possible retreat of Iran from its aggressive policies towards Israel and Arabs as well as coming to the table with the USA. While the government in Iran has moved a step closer towards restarting talks with the US and at the same time Iran’s proxy terror group Hezbollah said on Wednesday that the Shi’ite terrorist organization has no intention of going to war with Israel in the near future. These signal a change in Iran’s approach towards dealing with its neighbourhood.

With the over-the-top appeasement directed towards the Iranian regime, Iran had become overly confident. Tehran contemplated that it had a strong diplomatic hand, and the persistence of the Biden administration to reinvigorate the Iran nuclear deal would only strengthen its position. Iran’s government thought that in the meantime it can milk the situation and pressure Israel and Arab states. However, now Iran seems to have realised the futility of these actions and wants to go back to dousing the tension a little bit and get the Nuclear Deal done.

As the nuclear stockpile of Iran was growing, it had decided to stop the sharing of its nuclear site’s footages. Iranian Foreign Minister Mohammad Javad Zarif said last month that Tehran would stop the daily and weekly handover of recordings of its Nuclear sites.

Read more: Iran has now openly started threatening the free world as the Biden administration looks the other way

This was a threatening development for the US allies in the Middle East. The increased stockpiling of uranium by the Iranians disturbs the geostrategic status-quo in the region and the fact that the USA under Joe Biden has abandoned its allies in the Middle East and North Africa region makes the development more dangerous. At the same time, Iran with the help of its proxies in Yemen and Syria was mounting attacks on Saudi Arabia and Israel. The counteractions by Israel and the emergence of a combined Israel-Arab block in the Middle East have forced Iran to make a serious introspection. Iran has realised that these persistent decisions and playing hardball for too long would be counterproductive.

Rafael Grossi, the director-general of the UN’s International Atomic Energy Agency, said Iran and IAEA inspectors had been talking past each other, with Iran failing to provide credible answers to the inspectorate’s questions. He said Iran had now agreed to take part in direct, focused technical meetings at the beginning of April, with the aim for inspectors of reporting back to an IAEA board meeting in June.

In addition to this, Hezbollah deputy secretary-general Naim Qassem told Lebanon-bases broadcaster Al-Mayadeen “Hezbollah clearly declares that it has no intention of starting a war,” Qassem said. “Israel must understand that the arena is not open to it, and today the battle will be within the Israeli entity.” The comments come after Defense Minister Benny Gantz warned recently that Israel would not hesitate to exact a “painful” cost against Hezbollah chief Hassan Nasrallah and Lebanon should fighting erupt.

Israel has already started actions in retaliation of Iran and its proxy’s attacks. Israel’s Kan News, Channel 13 News and Ma’ariv newspaper all described the latest airstrikes as targeting Iranian sites, and characterized them as a response to a blast last week that hit an Israeli-owned ship in the Gulf of Oman, which Israeli officials have said was likely carried out by Iran.

Iran has now come to understand that the increasing strength of Arab-Israel can be a huge threat to it. And the best way forward is to decrease the escalations and move towards a more balanced form of diplomacy. Recent airstrikes by Israel in response to Iran’s acceptance of blowing up an Israeli vassal must have solidified Iran’s assessment.

Tel Aviv is currently negotiating the formation of a four-nation defence alliance with the kingdoms of Saudi Arabia, Bahrain, and the United Arab Emirates. As these relations and alliance solidify, the US hand will become weaker in the Middle East. And when this happens, Iran’s careless offensives against Israel and Saudi Arabia will turn out to be hugely counterproductive.

Tehran has realised it and wants to deescalate the matters before they go absolutely out of hands. Under fear of the Israel-Arab alliance’s rising strength, Iran puts its efforts to capitalize on the west’s desperations to reach a nuclear deal. And now realizing that it might lose its geopolitical strong hand, Iran has finally decided to reduce escalations and come to the discussion table.