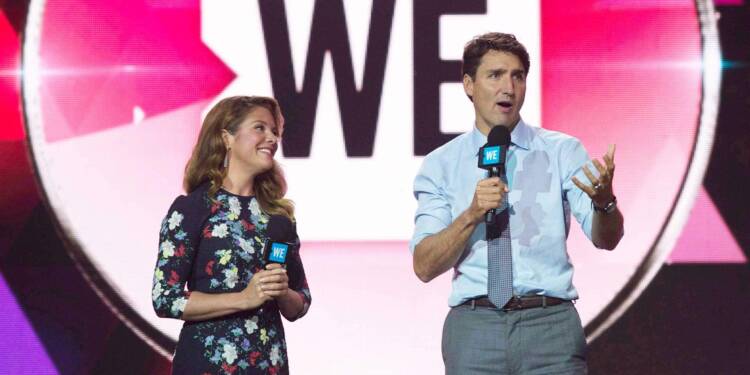 Canada’s Prime Minister Justin Trudeau is at the centre of a huge scandal, yet the Canadian media and the global media are letting him get away with it. We are talking about the WE Charity scandal, which has exposed Trudeau’s cronyism and deep conflict of interest.

So, what is the WE Charity scandal all about? And why is the Canadian media as well as the global media silent on the subject? We can’t answer the second question, but we can certainly answer the first one. There are a number of issues involved, right from Trudeau’s close links to the organisation, lack of a formal and open bidding process, to payment of money Trudeau’s family members for speaking at WE events.

The scandal is quite complicated. But we will explain it in brief. It all started with the awarding of a federal contract worth $912 million to WE Charity Foundation for administering the Canada Student Summer Grant program (CSSG). The program was designed to create grants for Canadian students who volunteered during the COVID-19 Pandemic. So far, so good?

Things didn’t turn controversial, until it was realised that WE Charity had close links to Justin Trudeau. WE Charity, which is described as an international development charity and youth empowerment organisation, has had close links with Trudeau, since the very inception of his political career. In fact, during a 2015 interview with the Ottawa Citizen, Craig Kielburger, WE Charity co-founder, called Trudeau a friend and someone whom he had known for over a decade.

This is not it. Justin Trudeau has been a public supporter of the organisation. In the past, he has appeared at a number of its events and has even done volunteer work for WE Charity. Justin’s wife, Sophie Trudeau too is a WE ambassador. In fact, she hosts a podcast for WE and she contracted COVID-19 only while speaking at a WE event in London in March last year.

Now, things get quite murky here. Firstly, WE Charity Foundation was selected without any prior bidding. Why? Rachel Wernick, Senior Assistant Deputy Minister, Skills and Employment Branch (SEB), at Employment and Social Development Canada, who suggested WE Charity’s name for the job has an answer. She claimed that other options were considered, but none except WE Charity met the criteria for administering the grants program.

The Foundation was incorporated in January 2018 and was described as inactive in August 2018. It became a federally registered charity only in April 2019. Its stated purpose was to hold WE Charity’s property worth several million Dollars. Now, why the Trudeau government felt that only WE Charity Foundation could administer CSSG is something that it has failed to explain.

Anyhow, the bigger issue is the family links. The organisation had claimed that it “never paid an honorarium” to Margaret Trudeau, Canadian Prime Minister’s mother. This would have been a matter of relief for Justin.

But later, it was revealed that Margaret and Justin Trudeau’s brother Alexandre were both paid tens of thousands of dollars in consideration of their appearance at WE Charity events. The charity organisation itself provided details of the speaking fees paid to the two individuals for their participation at WE event between 2016 to 2020, in response to an inquiry from CBC News. WE Charity also disclosed that Prime Minister’s wife was paid for appearing in its events.

WE Charity had pulled out of CSSG administration contract and the implementation of the grants program was taken over by the federal government. Yet, there are far too many questions for Trudeau to answer. But he is in no mood to give an explanation. Last year, when the issue was cropping up in Canadian politics, Trudeau ordered a government shutdown, and Conservatives alleged “coverup” to avoid scrutiny over the WE Charity scandal.

As of now, the New Democrat MP Charlie Angus has demanded a probe into the matter by RCMP and Canada Revenue Agency. Meanwhile, WE Charity co-founders Craig and Marc Kielburger, declined to testify before two Canadian House of Commons committees.

Trudeau is in a big spot of bother. He has a lot to explain. But the issue is that the media is simply not talking about it. Canadian media has released some reports, but there is lack of intent to up the ante over this issue. Global media is still worse. Had a conservative leader been involved in any irregularities, the liberal media would have gone way over the top. But with Trudeau, it is not ready to even discuss the issue.