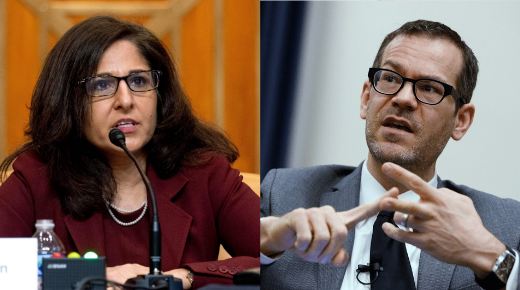 First Neera Tanden. And now Colin Kahl. The Republicans are giving a tough time to Biden nominees. The opposition is digging up past tweets and grilling the Biden nominees over such controversies. This ‘grill over past tweets’ actually has Donald Trump written all over it. So, the message is loud and clear- Republicans are coalescing around former President Donald Trump and a united opposition is now going to make Biden’s life difficult.

Tanden has withdrawn her nomination as the White House Budget Chief. She was facing severe criticism from Republicans for her ‘mean’ tweets, such as calling Republican Senator Tom Cotton a fraud, describing McConnell as “Moscow Mitch” and “Voldemort”. She had also tweeted that vampires have more heart than Senator Cruz. With Senate split 50-50 and defection by moderate Democratic Senator Joe Manchin, the Biden administration had to throw in the towel as far as Tanden’s confirmation is concerned.

The Republicans have managed to defeat Biden on the Tanden front. Now, they are going after Colin Kahl- Biden’s nominee for Secretary of Defense for Policy. Again, it is Kahl’s Twitter track record, which is hurting him. The list is pretty long in Kahl’s case too.

In response to one of Senator John Cornyn’s tweets in 2019, Kahl had said, “The GOP used to pride itself as a party that put values front and center in US foreign policy…. Now—as they debase themselves at the alter of Trump—they are the party of ethnic cleansing.”

The GOP used to pride itself as a party that put values front and center in US foreign policy.

Now—as they debase themselves at the alter of Trump—they are the party of ethnic cleansing. https://t.co/FNssbkxPQd

Again, after Trump vetoed a 2019 resolution for ending military support to the Saudi-led coalition in the Yemen war, Kahl had tweeted, “Every Republican Senator who upheld Trump’s veto now shares ownership of the world’s worst humanitarian crisis and adds their signature to the blank check Trump has given to Saudi Arabia.”

Every Republican Senator who upheld Trump's veto now shares ownership of the world's worst humanitarian crisis and adds their signature to the blank check Trump has given to Saudi Arabia. https://t.co/6qhOs4uzmM

The level of enthusiasm being shown by the Republicans is unprecedented here. They are making it clear that Democrats who used to go on Twitter and predate Trump or other GOP leaders won’t find it easy to have their nominations confirmed.

The Republicans are making such Democratic nominees pay. And there is a strong statement of intent on display. Consider this, Neera Tanden apologised for comparing GOP Senators to Voldemort and vampires, yet Republican Senators did not go easy on her during the confirmation hearing.

Now, Kahl too has said, “There were a number of positions that President Trump took that I strongly opposed, I think the language that I used in opposing those was sometimes disrespectful, and for that I apologize.”

But again, Republican Senators are unlikely to go soft on the Biden nominee.

Republican Senators understand that Biden nominees are now apologising for their egregious tweets and immoderate language, only because their confirmations are at stake. This is why half-hearted apologies are not going to work. Led by Donald Trump, Republican lawmakers are going to give a big headache to President Biden and the message is loud and clear- the GOP will not accept anyone who has had a past history of saying nasty things about its lawmakers.