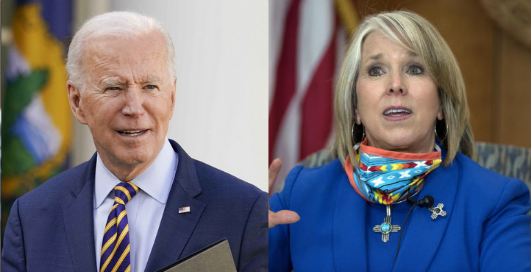 The cracks within the Democratic Party have started widening up after President Joe Biden and his disastrous policies and their implementation have started hurting even the staunchest Democrats. According to news reports, New Mexico Democratic Governor Michelle Lujan Grisham has cast her aspersions over President Biden’s order of pausing oil and gas leasing on federal lands which is all set to hurt the shale industry of New Mexico and in turn Michelle’s core voter base.

Reported extensively by TFI, shortly after coming to power, Biden passed a blanket order (January 27) that banned new oil and natural gas leases and drilling permits on federal land and in federal water for 60 days. Grisham in an interview said that the moratorium by Biden was pushed without any guidance.

Grisham said, “I’m clearly concerned that right out of the gate with very little guidance, we have an announcement to stall … a moratorium on lease applications, and the reality is: a lot of oil and gas … in the Permian [Basin] is on private land in Texas.”

It “doesn’t make any sense”

Biden did this “right out of the gate with very little guidance” pic.twitter.com/bOtmthUUBo

The governor continued, “The last issue is: It’s an economic problem for the state, but rather, it’s also a message to states to not do anything and wait for you to do it, and you’re not going to get as far as fast. If you’re looking for innovation [in] environmental policy, you’re going to stall that.”

Read more: Democrats in battleground states are not liking Biden’s clean energy changes at all and will not go ahead with it

The environment needs to be protected but introducing sweeping changes in the energy industry sector in such a short span of time is expected to sow the seeds of a dystopian and catastrophic future.

As reported by TFI, the state of Texas during the recent ‘deep freeze’ saw the repercussions of the irrational green deal that Biden has been trying to push. The windmills that Biden and his Democrats have been pushing as the future of America and Texas froze to death and as a result, millions of Americans plunged into darkness. It was only the ‘polluting’ oil and natural gas sector that came to the rescue and helped provide electricity to ordinary Americans.

Forget assimilating Republicans into making major energy policy decisions, Biden needs to get his house in order by taking in confidence, the likes of Governor Grisham who have now openly mocked the feasibility of his ideas.

It is high time that the Biden administration rails back its enthusiasm in implementing the green deal and work with the involved stakeholders to chalk out a middle ground, otherwise, a major civil war might break out in the Democratic ranks.