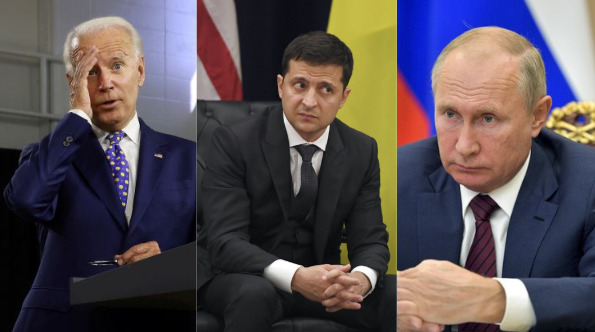 US President Joe Biden is playing some really dangerous games, in order to play up the Russia-Ukraine conflict. And now, he could even be facilitating a nuclear threat from Ukraine to Germany. Ukrainian ambassador to Germany Andriy Melnyk spoke to Deutschlandfunk radio on Thursday. Melnyk said, “Either we are part of an alliance like NATO and contribute in this way to making Europe stronger … or we are left with the other option, which is to arm ourselves.”

As for Ukraine’s nuclear ambitions, we are inclined to dismiss them at the outset. Ukraine is barely managing to meet the Russian military might and it is highly unlikely that Kyiv would be able to manage a successful nuclear programme.

So, Ukraine’s nuclear threats find their motivation in the split between leading NATO powers- the United States on one hand, and European powers like France and Germany on the other. NATO has been badly divided over how to handle the Russia-Ukraine conflict.

As for the US, the Biden administration has been speaking in the language of “costs” and “consequences”. The US Secretary of State Antony Blinken, for example, said, “President Biden’s been very clear about this. If Russia acts recklessly, or aggressively, there will be costs, there will be consequences.”

But for France and Germany, the Russia-Ukraine conflict is a huge challenge. Both French President Emmanuel Macron and German Chancellor Angela Merkel understand that they will be the first ones to suffer the consequences of any skirmishes between Ukraine and Russia.

Both France and Germany do remain critical of Russia’s role but they seek a peaceful and diplomatic solution to the entire conflict.

The split inside NATO, however, has left Ukraine high and dry. Kyiv wants NATO membership. The Biden administration would also want Ukraine to become a NATO member because it will serve as a statement of intent against Russia.

On the other hand, Russia considers NATO a vestige of cold war tactics. In fact, Moscow considers any Eastward extension of NATO as an affront to its interests in the region and therefore it frowns against the possibility of Ukraine’s inclusion in NATO.

Ukraine itself wonders why it has not been made a member of NATO till now. Dmytro Kuleba, Ukraine’s Minister of Foreign Affairs, for instance, denied that the West ever made a pledge to the erstwhile Soviet Union against the Eastward expansion of NATO.

Yet, France and Germany would be too reluctant to annoy Moscow by making Ukraine a part of NATO. Both Merkel and Macron understand that Moscow might interpret their consent for Ukraine’s NATO membership as a security threat.

Both Biden and Kyiv understand that the pushback against Ukraine’s NATO membership is likely to come from the European powers. Also, any such pushback leaves little room for Biden’s warmongering.

So, Ukraine’s threat of going nuclear has Biden written all over it. In fact, Ukraine would not feel comfortable in making such threats without the Biden administration’s blessings. It, therefore, makes perfect sense for Biden to encourage Ukraine in making such threats in order to bend Germany’s will and somehow create a combined front against Russia to play up the Ukraine conflict.