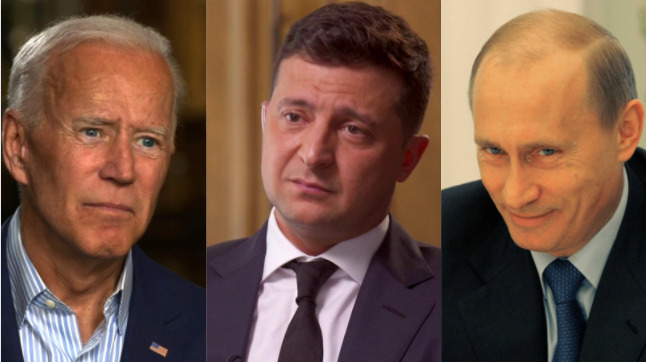 Ukraine’s President Volodymyr Zelenskiy has a clear message for Joe Biden- if you plan on sending us to war with Russia, you will have to come along. Zelenskiy has realised how Biden is using Ukraine as a means for vilifying Russia, helping the American deep State in keeping up arms supplies and managing the Ukraine-related allegations against his son Hunter Biden.

Over the recent past, US President Joe Biden has managed to reignite the Russia-Ukraine conflict. In order to create a new theatre of war, Biden pushed Kyiv into sheer aggression against Russia. Moscow, on the other hand, has reacted sharply in the form of diplomatic aggression and a massive troops build up on Ukraine’s Eastern flank. The US, meanwhile, has been doing mere lip service and motivating Kyiv to take on mighty Russia.

Yet, in a signal to Biden, the Ukrainian President has asked Western backers for “clear signals” of their readiness to support Kyiv in its standoff with Russia.

Zelenskiy said, “Our citizens need clear signals that in the eighth year of the war, a country that is a shield for Europe at the cost of its lives, will receive support not just as partners, from the stands, but as players on the same team, directly on the field, shoulder to shoulder.”

Meanwhile, the Ukrainian President also gave a signal of willingness to resolve the issue diplomatically with Russian President Vladimir Putin. Zelenskiy said, “Mr Putin: I am ready to go even further and invite you to meet anywhere in the Ukrainian Donbass, where there is a war.”

Zelenskiy added, “Does Ukraine want the war? No. But is Ukraine ready for the war? Yes.”

Yet, in the overall assessment of his remarks, the Ukrainian President was only giving a subtle message to Joe Biden. And why not? After all, Joe Biden is looking to throw Ukraine under the bus for purely geopolitical and personal reasons.

Firstly, it is becoming clear that throwing Ukraine into a war with Russia is a part of Biden’s larger anti-Russia campaign.

By opening up an indirect war with Russia, Biden wants to divert the global attention away from Beijing and vilify Moscow instead. Biden has partly managed that, but should Russia escalate tensions on its border with Ukraine, the US President will start terming Russia as a bully.

Also, Biden will have the chance of compelling Europe to seek a cross-Atlantic partnership with the US in face of a Russian threat as against the ‘strategic autonomy’ that Berlin and Paris profess.

Secondly, the deep state in the US and the war lobby in Washington DC have a special interest in igniting wars all across the globe. For decades, the American military-industrial complex has kept itself up and running by exploiting the many wars that the US deep state created across the world. The Russia-Ukraine conflict is no exception.

Read More: After turning Russia-Ukraine border into a warzone, Biden brings Korean Peninsula at the brink of a big war

And finally, the US President has to keep a good grip on Ukrainian politics because of all the allegations against him and his son Hunter Biden. Hunter had served on the board of a Ukrainian gas firm Burisma Holdings. He was hired in 2014 when his father was handling the US-Ukraine relationship as the US Vice-President in the Obama administration.

Later, Ukrainian officials had initiated a probe into Burisma Holdings founder. Within the US, Republicans suggested that, as the US Vice-President, Joe Biden had sought the firing of Ukraine’s then top prosecutor in order to save his son Hunter Biden.

Now, Ukraine’s President Volodymyr Zelenskiy is calling Joe Biden’s bluff. He is making it clear that the US cannot simply sit back and relax while pushing Ukraine into a deadly conflict with Russia. Zelenskiy’s message is loud and clear- Ukraine is not going to let matters escalate unless the US promises to get involved if a Russia-Ukraine war breaks out.