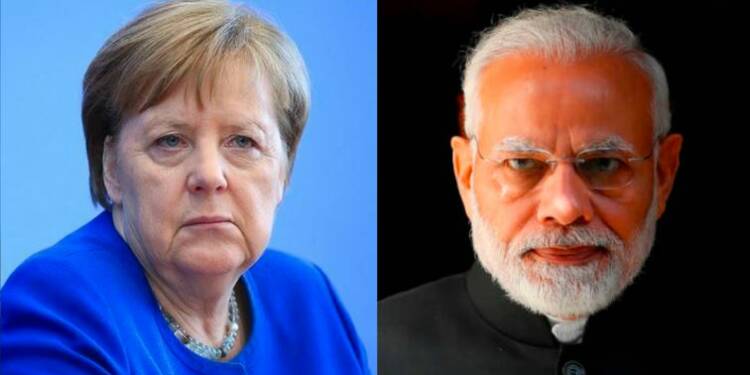 German Chancellor Angela Merkel’s political career is heading towards a lukewarm end, with Berlin gradually losing the de facto leadership role that it enjoyed in the European Union. But Merkel seems to have made a big mistake right in the twilight of her political career- the German Chancellor has made an arrogant remark about India which she may have to regret deeply.

While participating in an online conversation on Wednesday, Merkel cast aspersions about India’s colossal pharmaceutical industry. While doing so, Merkel did not even realise that she was talking about a nation, which has bailed out most of the world during the ongoing pandemic. Merkel’s remarks have naturally led to a major controversy.

Merkel has been quoted by POLITICO as saying, “We now have a situation with India where, in connection with the emergency situation of the pandemic, we are worried whether the pharmaceutical products will still come to us.”

Merkel added, “I am glad that we still have pharmaceutical production in Belgium, Holland, Germany.” The German Chancellor also concluded with what POLITICO described as a ‘Warning for India?’ She said, “Of course, we have only allowed India to become such a large pharmaceutical producer in the first place, also from the European side, in the expectation that this should then also be complied with. If that is not the case now, we will have to rethink.”

What Merkel said immediately caught the attention of observers, who noted that the German Chancellor made adverse remarks about India at a time when many European countries themselves gave banned vaccine exports. On the other hand, India has been performing the role of supplying vaccines to the developing parts of the world, notwithstanding the COVID-19 surge that it is itself facing.

Merkel’s remarks reek of sheer arrogance. The German Chancellor feels that she can strong-arm India. But what can Germany really do? After all, Berlin represents nothing more than a fallen empire from the twentieth century which now wants to display great power through a purely commercial vantage point.

Even today, Germany does not have much wisdom or control in terms of geopolitics. In fact, even Germany’s Indo-Pacific policy is not driven by a clear strategy to contain China but is more of a reactionary step by the Merkel administration to counter France’s successful Indo-Pacific strategy.

New Delhi itself has never tried to harm Berlin for personal gains, nor has it questioned Germany’s feeble commitment to democratic values which becomes clear every time the European country hobnobs with an authoritarian giant like China. Yet, if Merkel thinks she can get away with her arrogant remarks bordering on blackmail, then she has actually made a geopolitical miscalculation.

Within India, it must have been understood that none of Merkel administration’s actions is driven by much credibility. After all, Merkel’s policies often reflect the bruised ego of a nation with an unfulfilled desire of becoming a Great Power.

Perhaps, this is also why Berlin is never able to take a consistent policy stand. It keeps shuffling as per convenience. Take Merkel’s remarks against India, for instance. Initially, it seemed as if Merkel was pushing back against India’s pharmaceutical sector. But soon, the German Embassy in India tweeted in support of India’s battle against the ongoing COVID-19 surge.

1/3 @germanyinindia and German government are following the Covid 19 pandemic in India with deep sympathy and concern. India is our strategic partner, and we share a strong conviction that the challenges of this global crisis can only be met through international cooperation.

Merkel is ending her political career as a discredited leader of a fallen empire, whereas India is an ancient civilisation on course to gain its past glory. As such, Merkel’s unthoughtful remarks are going to prove a big mistake for which Berlin might have to pay dearly.