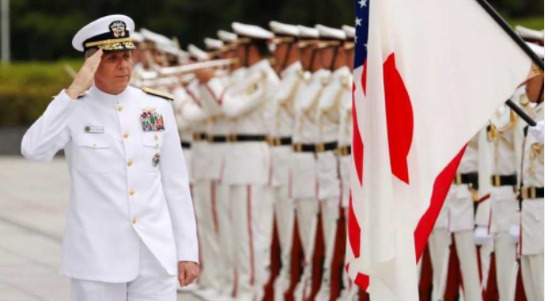 There is no dearth of evidence that can prove how big of a threat China and Xi Jinping are to the USA and the international order. However, the Biden administration seems adamant to not consider China as a threat and just go with business as usual. But this time the words have come from the outgoing commander of US forces in the Indo-Pacific and the US should not ignore his words.

Adm. Philip Davidson, outgoing commander of US forces in the Indo-Pacific, on Friday warned that China is aiming to replace the existing international order with its own and that the US and its allies must unite to defend a free and open Indo-Pacific. “Make no mistake, the Communist Party of China seeks to supplant the idea of a free and open international order with a new order — one with Chinese characteristics, one where Chinese national power is more important than international law,” the four-star admiral said.

Davidson issued his warning during his retirement speech in Pearl Harbor, Hawaii, at a change-of-command ceremony for the US Indo-Pacific Command. “Beijing’s very pernicious approach to the region includes a whole-of-party effort to coerce, corrupt and co-opt governments, businesses, organizations, and the people of the Indo-Pacific,” he said in a ceremony that was attended by Defense Secretary Lloyd Austin and Chairman of the Joint Chiefs of Staff Mike Milley.

Just recently at TFI, we had alerted how China is able to get hold of the first Island chain and it will make things more complicated for the allies going ahead. China has found a massive window of opportunity with the coming of the Biden administration to solidify its position in East Asia and remove the long-standing sway of the American alliance system. The US base in Okinawa, its long sustained partnership with South Korea and Japan as well as the security promise to Taiwan were for a very long time a guarantee against any Chinese expansionist dream. However, with the coming of the Biden administration and his soft approach towards Xi Jinping and the Chinese Communist Party, the effect of this alliance system has become weak.

The Miyako Strait is strategically valuable, being the only pathway for the Chinese People’s Liberation Army (PLA) Navy into the Pacific Ocean from the East China Sea and the only opening of the US’s strategy of Island chain’s first island chain. It is the PLA Navy’s main route into the Pacific Ocean. Though the Miyako Strait is too wide to be a chokepoint, the US can interdict the Chinese vessels passing through the crucial Strait by deploying anti-ship and air defence missiles. However, the Biden administration following a mellow approach with China and Biden’s planned withdrawal of forces from Okinawa have given China the confidence to make the Miyako Strait its backwater.

So in this backdrop, a warning from a person in such a position speaks volumes about the gravity of the situation. Davidson said the strategic competition in the Indo-Pacific is not between the two nations, but “a competition between liberty — the fundamental idea behind a free and open Indo-Pacific — and authoritarianism, the absence of liberty, and the objective of the Communist Party of China.”

The admiral said the Indo-Pacific will be home to two-thirds of the world’s population and two-thirds of the global economy in the next 10 years and that the US will defend its allies in this critical region. “To our allies in the region, Japan, the Republic of Korea, Australia, the Republic of the Philippines and Thailand, you have no better ally, and no better friend than the United States,” he said.

He could not have been any clearer, and by mentioning the threat so overtly he left nothing for nuance. China is the real threat,’ Outgoing US Indo-Pacific command chief warns Biden against his China appeasement policies which can have an irreversible impact on the USA’s influence in the region.

Australia was the first nation to ban Huawei, other nations followed suit. Now Australia is doing the same for BRI