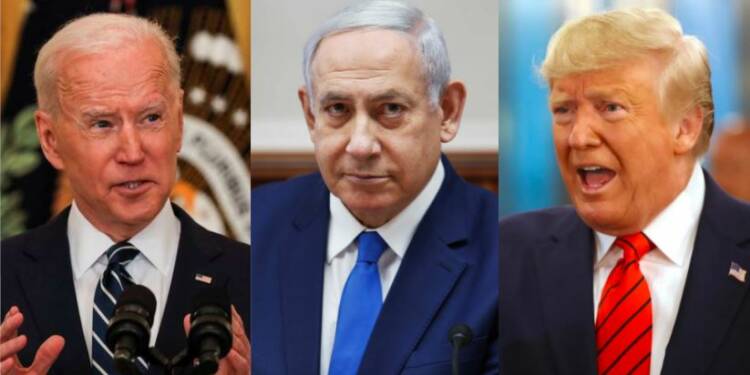 A left-liberal President is helming affairs in the Oval Office, and so the West is back to what it does best- create bad blood between Israel and the Arabs and keep the entire Middle East on the boil. Donald Trump had brokered peace agreements between Israel and the Arab Muslim States, dubbed Abraham Accords. But Joe Biden is playing up the historical Jewish-Arab conflict by resurrecting the Palestinian cause and weaponizing internal unrest in Israel.

Since Tuesday, Israel and Palestine have been locking horns with each other, as Hamas launched hundreds of rockets towards Israel. On the other hand, Israel has retaliated with airstrikes against Hamas leadership in Gaza. Meanwhile, on the streets of Israel, widespread roots are being witnessed between Israeli Arabs and Israeli Jews. Unfortunately, the entire unrest is affecting the Abraham Accords.

At the outset, it is amply clear that if military clashes are going on between Israel and Gaza-based Hamas right now, it is entirely attributable to the Western liberal media and the Biden administration. When Trump was in power, it was clear that the US would respond with asymmetric firepower in case Palestine dared to harm Israel.

So, Hamas and other terror groups never tried to shoot rockets at Israeli civilians and Israeli Defence Forces did not have to strike adversary targets inside Palestine.  However, things changed with Biden’s accession to power.

The sitting US President started off his Presidency by insulting Israeli PM Benjamin Netanyahu. To make it worse, Biden also showed a tendency of pandering to Israel’s enemies like Iran and Palestine. No wonder, Palestine has got so emboldened that it could target big cities in Southern and Central Israel, including Tel Aviv.

Israel as such had no option but to respond with disproportionate force and inflict dozens of casualties on Hamas in Gaza. Anyhow, Arab States like the UAE and Bahrain find themselves in a tough spot. They were historically supportive of the Palestinian cause but only last year, they have also become Israel’s allies.

Saudi Arabia, the undisputed king of the Sunni Muslim world, too finds itself in a diplomatic conundrum. Riyadh did not sign an Abraham Accord with Israel, but it did play the role of an enabler in stitching together Arab-Israel friendship. So, now what should it do- stick with Israel or support the Palestinian cause? Well, Arab Muslim States have decided to stay neutral and walk a diplomatic tightrope on the contentious issue.

However, there are some even more contentious issues in the fray, such as the recent clashes between Israeli Police and Palestinians near the Al-Aqsa Mosque compound. The UAE and Saudi had to condemn Israeli actions in order to maintain their reputation as the leaders of the Muslim world.

The issue of Israeli settlements in East Jerusalem is even more controversial. There is considerable fear-mongering about the eviction of Palestinian families in the Sheikh Jarrah neighbourhood of Old Jerusalem. Again, if the Arab Muslim States do not speak up about it for too long, they face the risk of Western liberal elites and Turkish headliners joining hands to claim that the Arab powers have abandoned the cause of Palestinian families.

Biden, who secretly opposes Trump’s Abraham Accords, too has been trying to exploit the situation. White House Press Secretary Jen Psaki, for instance, raked up the Jerusalem issue, seemingly in order to mount pressure on Arab powers.

The White House also issued a readout of Biden’s phone call with Netanyahu. The readout states, “He (Biden) shared his conviction that Jerusalem, a city of such importance to people of faith from around the world, must be a place of peace.”

Biden is deliberately internationalising the Jerusalem unrest because he understands how it forces the Arab States to speak up against Israel. Ultimately, the White House wants to strike at the heart of Abraham Accords.

Finally, there is an emerging issue of Israeli Arabs at play. Within Israel, riots and skirmishes between Israeli Arabs and Jews have been reported. Israel’s PM has, in fact, warned of a civil war between Jews and Israeli Arabs on Wednesday. The domestic unrest has intensified even as Hamas and the Israeli military lock horns with each other.

Israeli Arabs who enjoy equal rights as Israel’s Jewish citizens constitute 21 per cent of the country’s total population. The Israeli government has avoided outraging Arab citizens who have predominantly Palestinian descent. This is why they are exempted from compulsory military service, as the Israeli government does not want to force Arabs to take up arms against their brethren.

However, with clashes in Israeli regions like Lod, it seems that the Israel-Palestine conflict is creating dissensions within the Israeli society. Lod Mayor Yair Revivo said, “I have called on the prime minister to declare a state of emergency in Lod. To call in the IDF. To impose a curfew. To restore quiet… There is a failure of governance… This is a giant incident — an Intifada of Arab Israelis. All the work we have done here for years [on coexistence] has gone down the drain.”

Meanwhile, Israeli TV aired footage of a far-right Israeli mob attacking a man they believed to be an Arab near Tel Aviv. Right now, Arab Muslim States have not spoken about the unrest in Israel, but in the past, they have picked up the issue of Israeli Arab citizens in Israel.

Biden has allowed Hamas to attack Israel. The Hamas attacks, in turn, might have caused an Arab-Jew conflict to play up within Israel as well. As such, Arab Muslim States have been put in a tight spot- on one hand, they have to continue a budding relationship with ally Israel and on the other, they have to protect their reputation as leaders of the Muslim world. At the root of everything is Biden’s desire to derail the Abraham Accords.