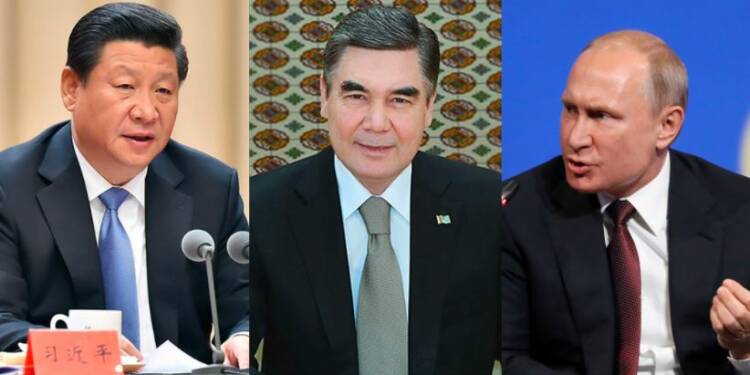 China keeps poking nose into Russia’s sphere of influence, while a patient Vladimir Putin avoids any direct confrontation with the Middle Kingdom. Till now, China has tried to eat into Russia’s sphere of influence in Central Asia, Eastern Europe and the Arctic. In fact, Beijing has been staking a claim on the Russian Far East itself. But Xi is irking Putin way too many times, and he might now have crossed the threshold of Russia’s patience.

China is once again trying to backstab Russia – this time by eating into Turkmenistan’s energy resources. However, Russia won’t be happy about China’s attempts to ramp up influence in the Central Asian nation which was a part of the erstwhile Soviet Union. In fact, Putin has engaged himself in a diplomatic battle with Beijing, in a bid to keep Turkmenistan in the Russia-led Eurasian fold.

China is reportedly looking at Turkmenistan to expand natural gas supplies, while it cuts down on Australian energy imports due to the ongoing feud between Canberra and Beijing. Chinese Foreign Minister Wang Yi even met his Turkmen counterpart Rashid Meredov and Deputy PM Serdar Berdymukhamedov on Monday. Concluding the meeting, Yi described natural gas as the “ballast stone” of bilateral relations.

Yi said, “China sees Turkmenistan as a long-term cooperative partner on natural gas, and is willing to formulate a comprehensive cooperation plan with the Turkmenistan side with a future-oriented perspective.”

A Chinese Foreign Ministry statement claimed that Turkmenistan and China have agreed to “further consolidate and expand cooperation in natural gas, and create a full industry chain strategic partnership in the energy sector”.

It is clear that as the Sino-Australia relationship sours, China needs an alternative to fulfil its gas import needs. However, there is a lot of geopolitical messaging at play. China did not choose to rely on Russia, which supplies the highest volume of its natural gas to Germany.

But the natural gas trade between Turkmenistan and China is hardly fair. The gas pipeline is a Belt and Road Initiative (BRI) project. So, you can guess what the Middle Kingdom wants.

China has been exploiting Turkmenistan’s dependence on natural gas exports. Beijing did build the gas pipeline but at a heavy cost to the Turkmen economy. As per the CIS Institute think tank, the total loan obligations for Turkmenistan under the BRI pipeline project went as high as  $8 billion. The repayments were, of course, to be made from gas export proceeds.

Anyhow, Turkmenistan faced a major crisis in 2018, with a massive decline in global gas and oil prices. To make matters worse, Beijing ensured that the terms of Chinese-Turkmen contracts linked gas prices with oil prices, which led to a further decline in the prices of Turkmen gas supplied to China and a reduction in foreign exchange inflow into the Central Asian nation.

As per a 2018 Nikkei Asia report, it was being predicted that Turkmenistan might have to sell its gas fields to China, apparently in order to meet the billions of debt payments it owed to Beijing. Anyhow, Turkmenistan barely managed to save itself from the Chinese debt trap.

Yet, Russia would be watching how Beijing is once again looking to make predatory investments in Turkmenistan in order to steal its natural gas reserves. Moscow always had its reservations about the kind of role that China would play in Central Asia.

In fact, the Kremlin did push back against growing Chinese influence in the region, but post-2014, the Western sanctions reduced Russia’s ability to contain Chinese influence. So, it sought to create a “strategic axis of convenience” with China encapsulating a broad understanding as to how Beijing would remain sensitive about Russian interests and avoid getting too involved in regions like Central Asia.

However, China is clearly not meeting its commitments. So, Russia is also looking to keep the growing Chinese influence in check. Russia has tacitly increased its trade turnover with Turkmenistan to a record level. This sends a crucial message to Ashgabat – you don’t have to depend on China and Russia is ready for a closer bilateral relationship.

Meanwhile, Serdar Berdymukhamedov, son of Turkmenistan’s incumbent President and his apparent heir, embarked on a four day trip to Russia in April. Some noteworthy developments were made on the visit with joint agreements in areas like health, agriculture, customs and finance.

Putin clearly foresaw Beijing’s plans to hike gas imports from Turkmenistan. So, it was ready with a plan to avoid yet another situation where a Central Asian nation succumbs to too much Chinese influence. Moscow’s message is loud and clear – it was tolerating Chinese interference in the Russian sphere of influence till now, but not any longer.