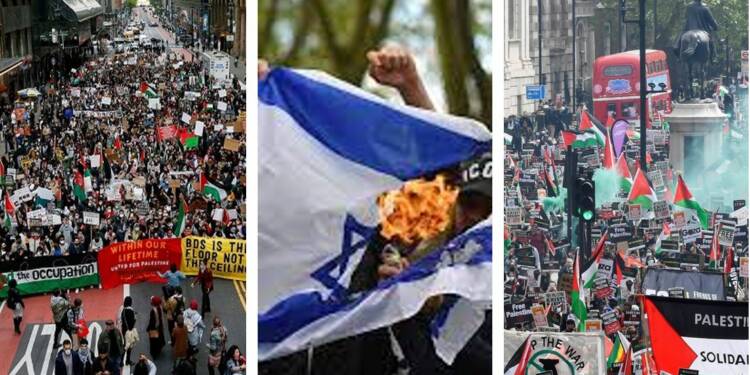 Some concepts are as clear as a day and allowing mild aggression towards a community as a whole concerning what is going on in some foreign land leads to some very dire situations. The world is witnessing the same concerning how the Jewish community is being targeted the world over by pro-Palestine youths as the liberal world looks the other way.

Though there were no violent anti-Semitic incidents in most of the world, attacks on Jews, which are common in the United States, especially New York, increased dramatically to 193 in just one week. Unlike recent attacks on synagogues before the Gaza war, these events point to a common pattern of pro-Palestine youths riding around in cars looking for and assaulting Jews.

One person was burned when two fireworks were thrown from a car amid an altercation with anti-Zionist protesters in a heavily Jewish New York City business district, according to police. On the other hand, Jewish diners at a Los Angeles restaurant were assaulted by a pro-Palestinian mob during an incident that Mayor Eric Garcetti called an “organized, anti-Semitic attack,” according to a report. Other reports too are arriving and with the tactical silence from these far-left, Islamist sympathiser voices, the mobs are only getting more emboldened.

Read more: AOC, Ilhan Omar, Rashida Talib and Bernie Sanders: The faces behind the attacks against Jews in the US

Alex Zeldin whose handle is @Jewishwonk wrote, “I wore my kippah on my way to get the last of my groceries on the Upper West Side ahead of Shabbos. Just had a pair of teens follow me for a block yelling antisemitic slurs and making threats.”

In Germany, “most violent incidents were in the southern Berlin district of Neukölln, where demonstrators who gathered in solidarity with Palestinians burned Israeli flags, chanted anti-Israel slogans and waved Hamas banners,” a report in The Guardian noted. In UK, pro-Palestine militias organized a convoy of cars from Bradford sporting Palestinian flags, “touring Jewish areas of north-west London,” according to The Jewish Chronicle. At least one person shouted “F**k the Jews, rape their daughters.” Police said four men were arrested on suspicion of racially aggravated public order offences.

There is a distinction to be made between politically democratic anti-Israel voices or pro-Palestine protesters and aggressive pro-Palestine convoys of men who embrace the sound, violence, and language of far-right militias. These militant groups, as well as their attire, demeanour, and behaviour, are popular in Iraq, Gaza, and other areas. Far-right parties, whether Islamists or Palestinian nationalists are appropriately referred to as such.

The most concerning development are the utter inaction of the liberal world and remaining unmoved. No investigation has begun to analyse why this conflict triggered, within days, similar systematic attacks on Jewish communities from Germany to the UK, Canada and the US. These attacks are only increasing, and it could be laid at the feet of the apathy which has been shown by the liberal world.