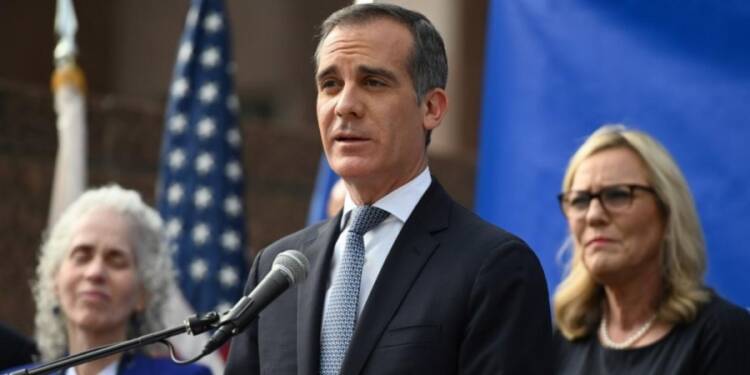 At a time when India is valiantly fighting against China’s border aggression at the Eastern LAC in Ladakh and the American Big Tech which is hell-bent on invading the privacy of Indian and interfering in the country’s internal politics, US President Joe Biden, a darling of the Indian liberal community is readying the deck to dispatch Los Angeles Mayor Eric Garcetti as the American Ambassador to India. Garcetti is not only a friend of Silicon Valley and decidedly pro-Big Tech, but in the past has also praised the creator of the deadly Wuhan coronavirus pandemic, Chinese dictator Xi Jinping as “extraordinary”.

In yet another sign of how the Joe Biden administration in its lust for Xi Jinping and the Chinese Communist Party is alienating the USA’s closest allies, Joe Biden is expected to nominate current Mayor of Los Angeles Eric Garcetti as the American ambassador to India.

Such has been the track record of Garcetti that he has a long history of collaboration with groups tied to the Chinese Communist Party’s United Front Work Department (UFWD). The sole aim of the billion-dollar UFWD is to “to co-opt and neutralize sources of potential opposition to the policies and authority of its ruling Chinese Communist Party” and “influence foreign governments to take actions or adopt positions supportive of Beijing’s preferred policies.”

The fact that Garcetti has collaborated with the Chinese Communist Party makes him a true-blue Democrat and is destined to hold important positions in a Democrat administration.

In 2014, on the invitation of the Chinese People’s Association for Friendship with Foreign Countries (CPAFFC) which is described as “avowedly an arm of the party-state,” Garcetti obediently visited Xi Jinping’s China.

To top it off, the U.S. State Department has described the CPAFFC as seeking to “directly and malignly influence” U.S. state and local leaders.

It is safe to say that Garcetti enjoys a considerable fan following in the CPAFFC as its Deputy Secretary-General, Zhang Heqiang, authored an article for the group’s magazine entitled “Saying Farewell to Mayor Garcetti at Beijing Airport” where Heqiang revealed that Garcetti praised Chinese President Xi Jinping as “remarkable”.

Heqiang wrote, “He spoke of President Xi Jinping as a remarkable Chinese leader, whose foreign policy succeeded in helping China build an image of responsible major country in the international community.”

It is of public knowledge that China’s version of WhatsApp, WeChat is a national security threat – an assertion forwarded by the Trump Administration. Heqiang wrote about how the pair messaged each other on WeChat, “I was surprised to know that Mayor Garcetti took the Beijing subway all by himself and that during his stay in China he even learned to use WeChat and built WeChat friend-groups. He praised WeChat instant messaging system as really good and more convenient than Facebook and added me as a WeChat friend. Right away he sent a photo of President Xi Jinping waving his hand and jested with me saying that President Xi was very satisfied with my work and was waving hello to us.”

He added, “On my way home, I unexpectedly received a voice message from Mayor Garcetti on WeChat: “Mr Zhang, thank you for your hospitality. I look forward to seeing you again.”

Hence, it comes as no surprise that Garcetti has featured on multiple occasions on CCP run media outlets where he lambasted former President Donald Trump’s tariffs on Chinese industry, noting “it’s very incumbent upon us to show our own leaders domestically that a lot of Americans depend on this relationship for their wellbeing.”

It seems that the American Embassy in India is all set to welcome a Chinese hand. The Indian government must be well prepared to take on both Xi Jinping and the CCP along with their lackeys in the Joe Biden administration.

Iran is set to elect Ebrahim Raisi as the new President. Relations with Arab world and Israel are bound to worsen

Tilinga Mandir Bordubi, Timings, History, Guide and How to reach