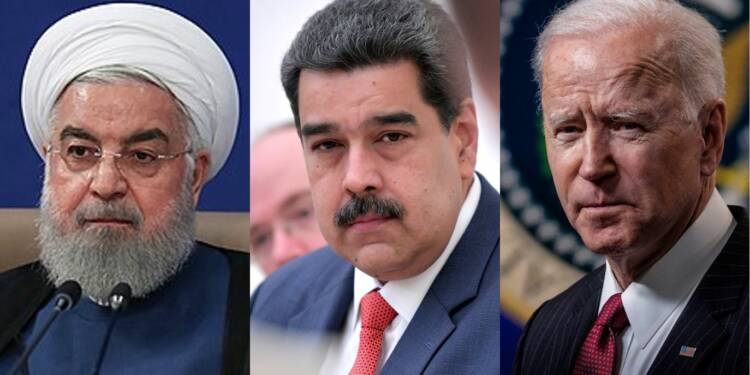 Iran has an ever-existing problem of dilly-dallying with the USA whenever it finds itself to be in a superior position. And with the current status of the Middle East coupled with Joe Biden’s extreme inclination for the Nuclear Deal, Iran has deduced its position of superiority. Thus, on one hand, Iran wants a deal with America and on the other, it is helping Venezuela’s anti-American dictator Maduro.

According to POLITICO, who gained the information from three persons familiar with the matter, the US national security community is monitoring two Iranian naval vessels whose final destination could be Venezuela, in what would turn out to be a provocative act at a difficult time in US-Iran relations. According to the persons who spoke on the condition of anonymity to discuss a delicate matter, an Iranian frigate and the Makran, a former oil tanker converted to a floating forward staging base, have been travelling south down the east coast of Africa.

At a time when Iran knows that the US is too inclined to make sure that the Iran Nuclear Deal goes through, and realising that, Iran is willing to take risks and go ahead with helping its fellow anti-American dictator Maduro. While it is unclear what the naval ships are containing, but the fact that they are headed to Venezuela could be deduced it is some kind of assistance. Some of this confidence also comes from the support Iran enjoys from China, however, this adventurism will make the situation of Biden worse and can even jeopardize the whole Nuclear Deal.

Recently, Chinese despot Xi Jinping rang up his Iranian counterpart Hassan Rouhani. During the phone call, the CCP general secretary extended China’s support for Iran’s “reasonable demands concerning the Joint Comprehensive Plan of Action [JCPOA] on the Iranian nuclear issue”. Xi Jinping also pledged to strengthen coordination with Iran and safeguard the common interests of both sides. Effectively, China conveyed its unwavering support to Iran’s military nuclear programme. The development is being seen as a tactic to strongarm the United States into submission before Tehran’s preposterous demands.

Read more: Iran’s new marriage with China is going to be the final factor to snatch the nuclear deal from it.

According to these people, US officials are unsure of the Iranian ships’ final destination but believe they are on their way to Venezuela. Iran’s motivation for sending the ships to the Western Hemisphere, as well as their cargo, remains a mystery, according to the sources. The two countries, which are both subject to harsh US sanctions, have grown closer in recent years, with collaboration spanning from gasoline exports to joint auto and cement plant projects.

As per POLITICO, Iranian media has claimed the 755-foot long Makran, which was commissioned this year, can serve as a platform for electronic warfare and special operations missions, and Iranian officials have boasted of the ship’s missile and weapons capabilities. It is able to carry six to seven helicopters, as well as drones, they have said.

As per the same report, In December, the top commander of U.S. troops in Central and South America described Iran’s growing military presence in Venezuela as “alarming.” In comments reported by The Wall Street Journal, Adm. Craig Faller, the commander of U.S. Southern Command, said the presence of personnel from Iran’s elite Islamic Revolutionary Guard Corps’ Quds Force is particularly concerning.

The sheer presence of Iranian warships in America’s backyard would be a threat to American authority in the region, possibly inflaming Washington’s debate over President Joe Biden’s decision to re-open talks with Tehran.