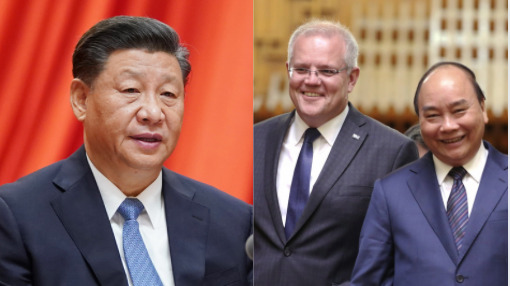 Vietnam is threatening to imperil China’s steel influence across the world. Not by words, but most definitely by its actions. The all-out economic hostilities between China and Australia are visible to all countries. But only some countries are using the opportunity to mount a collective offensive against China, by allying with Australia. Vietnam is one of them. China’s steel industry has been jeopardized due to Xi Jinping’s egotistic war against Australia as Australian imports including crucial raw materials for steel manufacturing such as iron ore and coal was banned by the Chinese government. The same industry which used to enjoy hegemony over the global steel market is now surviving on the edge.

Vietnam has now come out and decided to push the Chinese steel industry into oblivion. In 2019, China accounted for 53.3 per cent of world steel production. In 2020, China became the first country to produce over one billion tons of steel. However, by barring Chinese steel makers from manufacturing steel using Australian iron ore and coal – Xi Jinping has brought an entire industry on the verge of collapse.

Vietnam is simply preparing to replace China. Leading Vietnamese steelmaker Hoa Phat Group has purchased the entire interest in an Australian iron ore mine to secure a stable supply of raw materials in a competitive market. According to Nikkei Asia, Hoa Phat is also exploring the purchase of interests in Australian coking coal mines, another essential element of steelmaking. Hoa Phat procures 10 million tons of iron ore yearly as the company expands steel production. Roper Valley’s iron ore reserves are estimated at 320 million tons and will provide the Vietnamese steelmaker with at least 4 million tons of the essential material annually.

By establishing a direct source of iron ore for itself, while also exploring the possibility of doing the same to procure coal, Vietnam has ensured that its steel production receives a shot in the arm and can safely progress without any hindrances. At a time when China is floundering to find alternate sources of raw materials required for producing steel, Vietnam securing a solid iron ore mine will definitely be an eyesore for the CCP.

Xi Jinping’s primary motive to stop importing iron ore and coal from Australia was to cause economic harm to the down under country and severely batter its raw material exports. However, Australia is flourishing even without China and is readily getting new buyers for its iron ore and coal. In a post-pandemic world, countries from around the world are focussing spending on infrastructure – which requires iron ore and steel. So, Australia is definitely not feeling the heat of China’s economic pressure campaign.

Chinese steelmakers, meanwhile, simply see no sense in slowing down production, just because their paranoid President wants to settle scores with Australia. Presently, steel production in China is a very profitable venture given the growing demand for the product. Steel output is therefore growing at 14.4 per cent on an annualised three-month basis. However, Xi Jinping has created an environment of fear for steel manufacturers, and his regime has also been engaging in brazen market manipulation techniques.

China has a near-monopoly in global steel production. It gives the paper dragon a strategic advantage over its adversaries, apart from fuelling a huge construction industry in the Communist nation that further drives economic growth. Vietnam seems to have realised the same, and is killing two birds with the same stone. Firstly, it is helping Australia economically, by no less than procuring interests in an entire iron ore mine and planning to do so with coal too; and secondly, it is rubbing the same on China’s nose and working to ensure that China’s hegemony over steel manufacturing is dismantled.

Earlier, the CCP’s similar adventurism against Australian coal had forced the Chinese cities to go dark pushing millions of Chinese citizens to shiver in the freezing temperatures. Most recently, we at TFI had reported how industries and factories in China’s southern provinces were being told to ration their power consumption – all because China has been incapacitated to produce sufficient electricity using thermal means – due to the ban on Australian coal.

Vietnam, by directly procuring the materials it needs from Australia, is sending a stern message to China. The message is that Southeast Asia stands with Australia and like-minded democratic forces who are ready to take on China in every sphere.

‘It won’t take time for the USA to suffer the fate of USSR,’ Putin’s grim warning to Biden