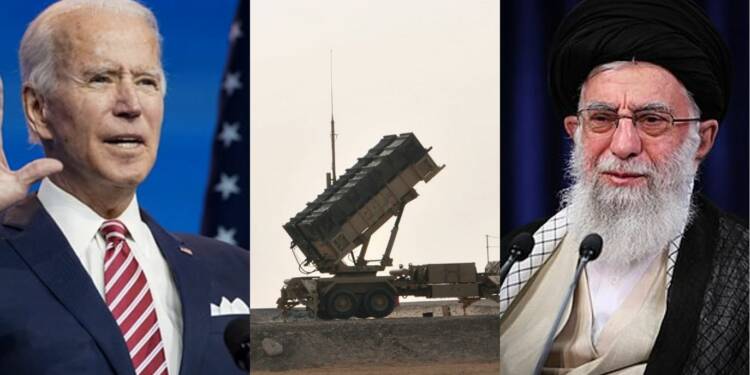 Joe Biden’s sycophancy with the Iran Nuclear Deal is something really wondrous and infuriating for the regional allies of the USA in the Middle East region. Even at a time when the US ally Saudi Arabia is facing increased attacks from the Houthi rebels in the backdrop of the election of Ebrahim Raisi as the leader of Iran, the Biden administration is stripping Arab nations of the missile defence systems as a bargain for the Iran nuclear deal. The Pentagon is pulling missile defence systems and other military hardware and personnel from Saudi Arabia and other countries in the Middle East, according to a defence official.

The Pentagon is pulling approximately eight Patriot anti-missile batteries from Arab countries including Iraq, Kuwait, Jordan and Saudi Arabia, according to officials. Another antimissile system known as a Terminal High Altitude Area Defense, or Thaad system, is being withdrawn from Saudi Arabia, and jet fighter squadrons assigned to the region are being reduced, those officials said.

While the Biden administration is providing the reason that it needs to prioritise Asia and Eastern Europe, the reason does not add up. There are obviously significant air defence challenges for the US in Asia, even more so than in Eastern Europe, but these largely centre on drones and cruise missiles on the one hand and the soon-to-arrive next generation of hypersonic weapons on the other. These challenges are not met by Patriot or THAAD.

The administration appears to believe that by yielding to Iran’s geopolitical and ideologically objectives it could wean Iran away from Russia and possibly even China. This is happening at a time when US President Biden’s top aides feel the time has come to meet with Iranian officials behind closed doors in Vienna, where they have been relaying communications from hotel rooms through European intermediaries because the Iranians will not meet them directly.

And, according to them, the next six weeks until Ebrahim Raisi’s inauguration offers a once-in-a-lifetime opportunity to reach a final agreement with Iran’s leadership on a difficult issue that has been postponed. While the Biden Administration is stripping the Arab nations of the missile defence systems, the increased vulnerability is being capitalised by the destabilizing forces who also happen to be Iran’s proxy. France said it strongly condemned the Houthi drone attacks on Saudi Arabia, particularly targeting the southern city of Khamis Mushait, and called on the militia to immediately stop their destabilizing attacks in the region. Saudi Arabia’s air defences destroyed 17 drones launched toward the Kingdom’s southern region on Saturday, the Arab coalition said.

The belief in Washington and Tehran is that Ayatollah Khamenei has been orchestrating not only the election but also the nuclear talks and that he does not want to give up his best chance of freeing Iran from the sanctions that have kept its oil out of a recovering market. As a result, insiders say the ultimate decision to proceed with the deal could come in the coming weeks before Mr Raisi is sworn in and while Iran’s older — and in some ways more moderate — administration is still in power.

Read more: Biden finally got the opportunity to sign a nuclear deal with Iran

“For Iran, this is a real Nixon-goes-to-China moment,’’ said Vali Nasr, a professor of political science at Johns Hopkins University’s School of Advanced International Studies, who is close to the negotiations. “If anyone other than the conservatives made this deal with Biden, they would be torn up,” he said of Iran’s new leadership. “The bet is that they can get away with it. No one else could.”

All these hopes are also driven by the irreconcilable and unreasonable sycophancy of Joe Biden with the achievement of the Nuclear Deal, by any means necessary. And based on this perspective Biden is ready to even push its longstanding regional allies under the bus. Following a September 2019 attack on Saudi Arabia’s oil infrastructure, which was blamed on Iran and interrupted global oil supplies, the US increased its military presence in the country. Following the incident, the US deployed tens of thousands of troops as well as two Patriot missile batteries and one Terminal High Altitude Air Defense (THAAD) system to the country.

The withdrawal of forces from the Middle East would primarily affect these and other air defence assets, the statement said, including Patriot missile batteries. The US had deployed Patriot missiles to Saudi Arabia and Iraq to counter the threat posed by Iran and its proxies in the region, including in Iraq and Yemen. However, their removal from their current positions will bolster the geopolitical standing of Iran and make the US allies comparatively way more vulnerable and at the mercy of Iran and its proxies.

Amnesty International and Human Rights Watch on Saturday said Raisi’s election as Iran’s new president was a blow for human rights and called for him to be investigated over his role in what Washington and rights groups have called the extrajudicial executions of thousands of political prisoners in 1988. And in fact, the Biden administration is willing to jeopardize the security interest of its allies for the sake of a deal with the devil tells something about his geopolitical acumen. As things stand, it is becoming clear by the day that the Biden administration is stripping Arab nations off of missile defence systems as a bargain for the Iran nuclear deal.