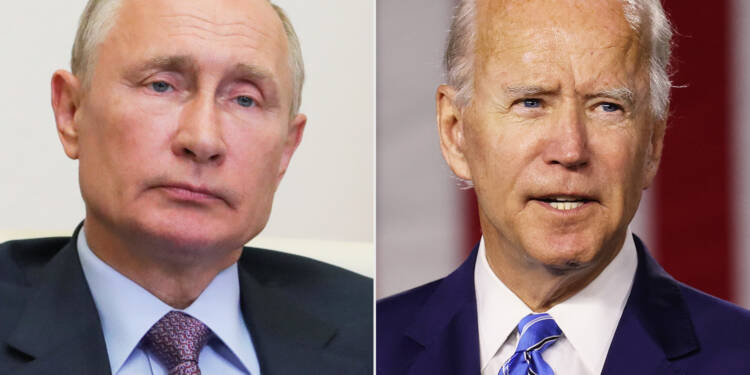 Joe Biden’s double speak is poking the Russian military firepower in an extremely imprudent way. Russia recently carried out its biggest war games since the end of the Cold War. Russian destroyers and fighter jets reportedly ventured within 35 miles of the US state of Hawaii and an alarmed US scrambled F-22 fighter jets over Hawaii in response. If the US and Russia are getting locked into military tensions, Biden’s double speak is be blamed for the crisis.

Only a week ago, things were looking good between Moscow and Washington. Biden and Putin had met in Geneva, and the US President seemed keen on driving a wedge between China and Russia. Earlier, Biden had also waived sanctions against the main company involved in Nord Stream 2 gas pipeline construction. But Putin understood that Biden won’t be able to stay true to his words, which explains the Russian military drills.

And Biden was actually unable to keep his promise of working with Putin. After the Putin-Biden summit in Geneva, the US and Russia were supposed to reach some sort of an understanding on key global issues. But Moscow was clearly annoyed when US National Security Advisor Jake Sullivan disclosed that the US was preparing a new package of sanctions against Russia.

The diplomatic reaction by Moscow revealed just how disappointed Russia got about Biden’s double speak. Russian Ambassador to the United States, Anatoly Antonov said, “This is not a signal we all expected after the summit.” Antonov added, “I don’t think it is possible to stabilize and normalize relations between countries by means of sanctions.”

But to be fair, Russia never really fell for what Biden said during the Geneva meeting with Vladimir Putin. Firstly, Putin understands that Biden’s domestic compulsions are such that he will never be able to work with Russia, even if he really wants to do so. And secondly, even during the Geneva meeting, not everything seemed cordial between Putin and Biden. The US President did show a tendency to criticise and vilify his Russian counterpart.

The Russian Defence Ministry said that its drills took place some 300 miles off the coast of Hawaii, but unconfirmed satellite images dated June 19 show some of the Russian Navy surface combatants blowing up an aircraft carrier merely 35 miles away from the US state.

Russia is quite evidently frustrated and annoyed by what Biden did. For the Kremlin, Biden’s behaviour after the Putin-Biden summit in Geneva effectively amounted to a breach of trust. So, Biden’s double talk and past history of using phrases like “killer” for Putin triggered a dangerous turn of events, with the Russian military getting unprecedentedly aggressive.

Read More: Biden takes a massive U-turn on his China policy and goes back to the age old anti-Russia plan

Also, it was very natural for Putin not to trust Biden. Even in the past, the incumbent US President has been unable to take a consistent stand regarding Russia. Early into his tenure, Biden was found pressing for a dialogue with Putin and backing out later. Even during the summit in Geneva, Biden avoided holding a joint press conference with the Russian President in order to avoid any embarrassment. Russia, on its part, must have seen more sanctions coming from the US.

Biden, on his part, faces serious compulsions, both in terms of foreign policy and domestic politics. Biden understands that it makes sense in his foreign policy to cooperate with Russia and isolate China, by exploiting the faultlines that divide Moscow and Beijing.

But within the US and the Democratic Party, Joe Biden faces a lot of pressure from Bernie Sanders and like-minded radical socialists who strongly lobby for better relations with China. They are keen on ensuring that Biden cooperates with China, and they also keep pushing strong propaganda against Russia. In the past, Biden has shown a tendency of being overpowered by radical progressives and far-left elements within the Democratic Party.

Putin understands the equation between hardline Democrats and Biden. He also understands that Democrats have a general aversion towards Russia, which also seems to influence Biden quite deeply.

Unfortunately, Biden is confusing his domestic compulsions with his foreign policy. And this is triggering some very dangerous reactions from Moscow. The US-Russia relationship is again going south in a very dangerous way, and Biden’s indecisiveness is to blame for the latest round of tensions between the two countries.