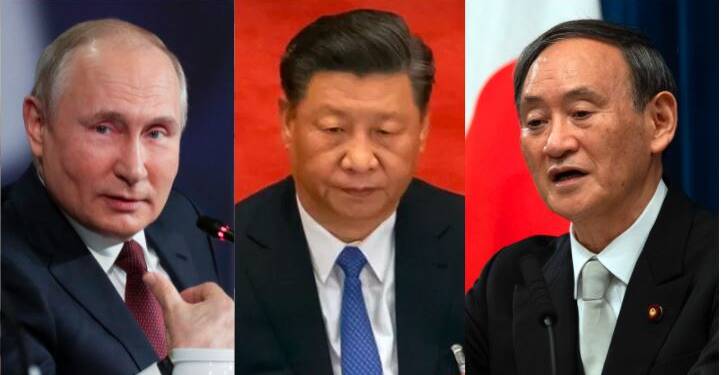 The Biden administration was contemplating on easing tensions with Russia so that they can work together to focusing on China, however, the domestic pressure had made it impossible for him to reach any working understanding. The US is preparing additional sanctions against Russia for the poisoning of opposition leader Alexei Navalny, National Security Adviser Jake Sullivan said. This development made sure that going ahead, the USA will not be able to solely focus on China and its attention will be unnecessarily divided.

Russia has also realised this and which is why it has also not shied away from banning the organisations which infringe on its sovereignty.  Russian state prosecutor’s office said on Monday it banned Bard College, a US non-governmental organisation, after labelling it “undesirable”. In such a situation, India has stood with Russia, understanding its importance in cornering China and New Delhi has brought Japan too on board with its understanding. This development is a nightmare for Xi Jinping.

The Kuril Islands dispute – a legacy of the Second World War, has been at the root of cold relations between Moscow and Tokyo. The Suga administration in Japan had already signalled that it is ready to resolve the historical dispute. Russia and Japan should not be fighting against each other over a decade-old dispute, rather they should be fighting together against a common enemy – China. Now, Russian President Vladimir Putin has also joined the chorus and signalled Moscow’s intent to bury the dispute and sign what could possibly be a landmark peace treaty between Japan and Russia.

Read more: Russia’s offer to Japan is quite simple, keep the US out and I shall be your friend

Russian Federation Minister of Economic Development Maxim Reshetnikov noted in his speech at the session that the coronavirus pandemic has not hampered or will not hamper the economic cooperation between Russia and Japan.

“Despite a difficult year, we managed not only to continue existing projects but were even able to launch new ones. An express test for coronavirus was created, and a container train with Japanese goods was launched for the first time on the Trans-Siberian Railway. Construction began on a centre for preventive medicine in Khabarovsk. The Japanese company Fanuc opened an engineering centre in Skolkovo,” he told the gathering.

According to Maxim Reshetnikov, the building of liquefied natural gas trans-shipment facilities in Kamchatka and the Murmansk region, as well as the construction of an ion therapy centre for cancer treatment in Obninsk, are among the ideas for cooperation with Japan. Both countries are getting ready to embark on new and exciting paths in hydrogen energy, climate change, the creative economy, and e-commerce.

Russia, on the other hand, has urged potential international investors to invest in the region. Kaluga, for example, a provincial city located on the famed Oka river about 150 kilometres southwest of Moscow, has enacted a number of favourable policies as a result of which it has attracted five multinational vehicle manufacturing enterprises, including Nissan of Japan.

There is now a growing acceptance in Asia and the Indo-Pacific that China is the most potent threat faced by all countries. As such, all far-thinking and strategically sound nations must take immediate steps to cull the emerging threat that is China. It is for this very reason that Japan and Taiwan have agreed to set aside their differences over the Senkaku Islands and work together to address the Chinese threat.

Russia has woken up to the China threat due to the paper dragon asserting itself in Russia’s Far East and staking claim over the city of Vladivostok. Additionally, Chinese attempts to eat into exclusive Russian spheres of influence have not gone down well with Moscow. In fact, Putin has been taking a number of strategic steps to ensure that Beijing’s nefarious plans are foiled. And then, it has already been reported by TFI how China is trying to make Russia a second fiddle to its global ambitions by stealing Russian defence technology and even becoming a roadblock in Putin’s vaccine diplomacy.

By extending an olive branch to Japan, Putin is offering Tokyo a chance to make peace with Moscow while also helping it cut down on its dependence on the US. A Russia-Japan alliance aimed against the paper dragon, for all practical reasons, will be the death knell for China. And this development is a nightmare scenario for Xi Jinping and CCP.