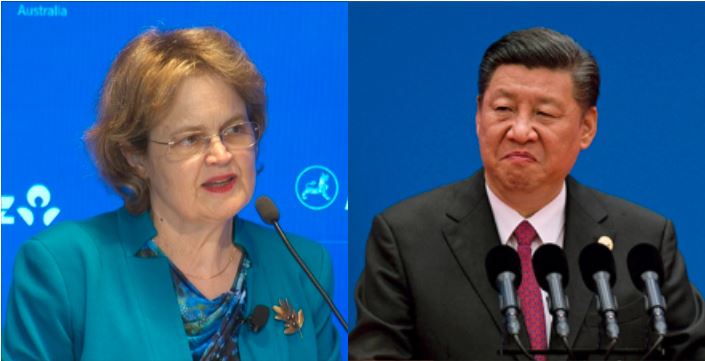 A top Australian diplomat has caused a glorious meltdown in China. Frances Adamson, Australia’s outgoing Secretary of the Department of Foreign and Trade (DFAT), had some frank remarks to make about Chinese President Xi Jinping’s authoritarian regime in China. But it seems that China’s thin-skinned diplomats clearly do not have the stomach to digest such frank assertions. Therefore, Chinese diplomats got enraged almost instantly.

Speaking at the National Press Club on Wednesday, Frances Adamson claimed China suffered from a “siege mentality”, and that the Xi Jinping administration in China is “dogged by insecurity”. She also said that the Chinese government holds a “deeply defensive mindset”.

Adamson, a former Ambassador to China, spoke at length about the deteriorating Sino-Australian ties. Taking a dig at China, she said, “Insecurity and power can be a volatile combination, more so if inadvertently mishandled.”

The DFAT Secretary also said, “Few really grasp that this great power is still dogged by insecurity as much as driven by ambition, that it has a deeply defensive mindset perceiving external threats even as it pushes its interests over those of others.”

Adamson’s stinging remarks against China came in the context of a new poll by Sydney-based Lowy Institute, which showed that over 60 per cent of Australians saw Beijing as a rising threat. Australians are responding negatively to Chinese investment in Australia, and are increasingly concerned about Beijing’s hawkish foreign policy. As per Adamson, China’s insecurity and siege mentality are to be blamed for the highly negative sentiment of China in Australia.

China’s wolf-warriors, of course, failed to stomach Adamson’s remarks. Chinese Foreign Ministry spokesman Zhao Lijian said, “I’d like to stress that since the latter half of 2017, China-Australia relations have experienced one serious setback after another.”

In a bid to blame Australia for strained bilateral ties, Lijian also said, “The crux is that Australia, in a breach of international law and basic norms of international relations, grossly interfered in China’s domestic affairs, hurt Chinese interests and wantonly placed restrictions on bilateral exchange and co-operation.”

The Chinese spokesman added, “The Australian side bears full responsibility.”

Meanwhile, Global Times, a Chinese Communist Party (CCP) mouthpiece and extended arm of the Chinese Foreign Ministry, too suffered a major meltdown. Global Times made a desperate attempt to show that China is not “insecure.”

The CCP mouthpiece wrote, “Adamson’s speech is opposite to the facts. Where is China’s “insecurity”? In today’s world, China is one of the most confident countries, and the Communist Party of China is one of the most confident political parties. China’s Shenzhou-12 manned spacecraft has just sent three Chinese taikonauts into China’s own space station. The aerospace achievements are another huge spur of Chinese people’s confidence, against the background that the Chinese economy has taken the lead in recovering from the COVID-19 epidemic.”

For China, Australia’s diplomatic moves are becoming too hot to handle. And truth be told, the Xi Jinping administration is actually getting a bit too insecure.

Earlier this month, Australian PM Scott Morrison tabled a dossier before the G-7 that Chinese diplomats had handed to Nine News reporter Jonathan Kearsley at a meeting inside Canberra’s Hyatt Hotel last November. According to the Sydney Morning Herald, the document listed 14 grievances Beijing had with Australia, including restrictions on foreign investment decisions based on national security grounds, government funding for think tanks critical of China, and unfriendly reporting by Australian media.

China’s interventionist character stood exposed before the seven richest economies of the world. An insecure China responded desperately by dragging Canberra to the World Trade Organization (WTO) over duties imposed by Australia on imports of Chinese railway wheels, stainless-steel sinks and wind towers. However, some of the impugned duties were imposed by Canberra over five years ago. China’s WTO complaint, therefore, reeked of insecurity and desperation.

The Xi Jinping administration is clearly rattled by the Scott Morrison government’s diplomatic campaign. To make it worse, the outgoing DFAT Secretary has riled up Chinese diplomats even further and now China’s deep insecurity is at full display for the entire world.

McAfee may not be dead