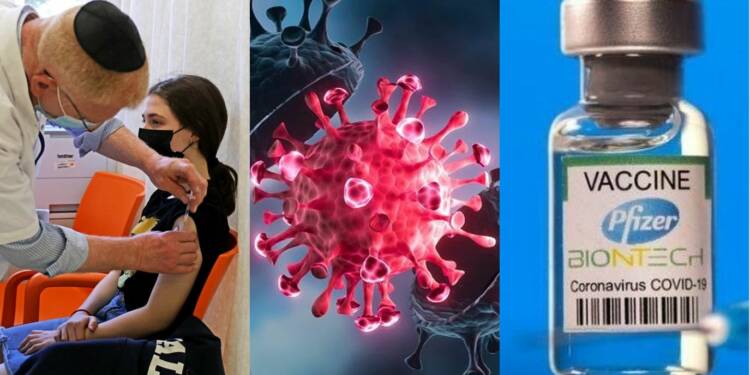 For the past year, there have been many success stories of countries succeeding in battling the Coronavirus pandemic, however, the virus showed in a very short span of time, that it is not wise to declare victory early. However, in the case of Israel, it made the celebratory announcement after vaccinating its entire population with the Pfizer vaccine. But things are again becoming worse and worse, given the latest increase in the number of cases and the infections crossing the 200 cases threshold. Doing basic arithmetic would lead to the most logical conclusion that the Pfizer vaccine has not been successful in containing the latest increase in cases.

According to a Saturday night update from the Health Ministry, there were 229 new cases registered on Friday. For most of June, Israel only recorded 3 to 30 new cases per day, but after numerous school breakouts, the number of cases began to rise at the beginning of last week. Despite this, only 26 people are in critical condition. Thousands of new cases were documented every day in Israel during the peak of the pandemic, with 1,200 people in critical condition.

After the government restored the need of wearing masks indoors and in crowded spaces on Friday, the coronavirus cabinet is due to convene on Sunday to consider the next steps in managing the rising number of COVID-19 cases in the country. Additional limitations being considered by the government to include mandating residents to wear masks in public places, limiting the number of people allowed to gather, and testing unvaccinated people before allowing them to participate in particular activities.

Vaccine makers' claims versus real-world evidence: This report in today's Wall Street Journal should be read by those in the Indian government that are close to changing the country's regulations by yielding to Pfizer's precondition for blanket immunity from legal liability. pic.twitter.com/3IabPE9qTt

The emergence of the extremely dangerous delta strain, which spreads quickly among unvaccinated individuals, particularly youngsters, appears to be driving the pandemic. Infected vaccinated Israelis have been documented, however, they appear to have just minor symptoms. The authorities delayed the scheduled reopening of the country to vaccinated travellers until the beginning of August earlier this week. It was originally scheduled for July 1, but it has been open to vaccinated tour groups since May.

While a Pfizer official in Israel said on Thursday that the Pfizer-BioNTech vaccine is highly effective against the Delta variant of COVID-19, the situation on the ground is telling an entirely different story. In an effort to curb the spike in COVID-19 cases, Coronavirus Czar Nachman Ash announced Thursday that the indoor mask mandate, which requires individuals to cover their mouths and noses to avoid infections, will be reinstated early next week. Ash told media Thursday evening that the outbreak had extended to Kfar Saba, Ramla, Herzliya, and other places, citing Health Ministry data that showed 169 people had been diagnosed by 6 p.m. on Thursday, the biggest day figure in months.

In Israel, more than half the 9.3 million population has received both Pfizer shots and a steep drop in cases has prompted authorities to lift most coronavirus restrictions. However, verified instances have increased in recent days, prompting health officials to urge parents to vaccinate their 12- to 15-year-old children, who became eligible this month. As reported by Reuters, Israel has one of the world’s most advanced vaccination campaigns largely based on the Pfizer-BioNTech shot. Sharon Alroy-Preis, head of public health at Israel’s Health Ministry, said that Israel still lacks enough data to provide insight into vaccine effectiveness against the Delta variant. And if we take the latest Covid outbreak into consideration, then we can say that the vaccine has not been as effective as the company folks would want everyone to believe.