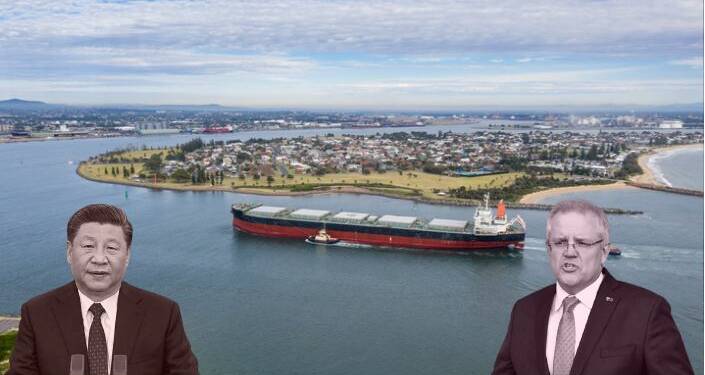 Calls being made to Free the Port of Newcastle (PON)

China is about to suffer yet another setback down under, as calls grow in Australia for the Port of Newcastle to be demonopolized of Chinese influence. The Port of Newcastle in the Australian state of New South Wales has hit the headlines for becoming the latest battleground in the economic and geostrategic war between Canberra and Beijing. After the Darwin Port and Victoria’s Belt and Road Initiative partnership with China, it seems Australia is all set to kick the Chinese partner out of the Port of Newcastle.

Fifteen Australian politicians, including the deputy prime minister, have called for action from the federal government on the Port of Newcastle which is partially leased to a Chinese state-owned enterprise- China Merchants, which has links to the CCP. In a letter to Prime Minister Scott Morrison and Treasurer Josh Frydenberg, Senator Eric Abetz of Tasmania expressed concern that the Chinese Communist Party (CCP) will be given a geopolitical advantage by proposed changes to the country’s National Access Regime (NAR).

The signatories to this letter included a contingent of coalition partners, which is indicative of the fact that the federal government of Australia will indeed act on the calls being made to free the Port of Newcastle (PON) of Chinese influence. 50 per cent of the 91-year lease of the said port is owned by a company backed by the CCP.

The Port of Newcastle was owned since 2014 by China

According to The Epoch Times, the Port of Newcastle handles approximately 40 per cent of Australia’s export volume of coal every year—4,400 ship movements and 164 million tonnes of cargo. It has been privately owned since 2014 by The Infrastructure Fund and China Merchants Port Holdings Company (CMPorts).

In the letter, the Australian parliamentarians said, “It seems incredulous that a half-Chinese-owned company that controls a monopoly bottleneck in the coal export chain can increase charges at their discretion, forcing up prices for Australian coal overseas and making our second-largest export commodity less competitive.”

Demands are now being made to declare the port under the National Access Regime (NAR), which will enable the Australian Consumer Competition Commission (ACCC) to have oversight over the port’s workings.

The demands for action to be taken against the Chinese owner of the Port of Newcastle have especially galvanised after Australian Finance Minister Simon Birmingham had said last month that the federal government is ready to legislate to protect coal exporters should Chinese owners attempt to interfere with shipments from the Port of Newcastle. This could include, he said, “the rapid passage of further legislation, which is always within the power of a sovereign parliament such as Australia’s.”

The Global Times’ outrage against Australia

The New South Wales (NSW) Mineral Council also wants the government to declare the port under the National Access Regime. China, meanwhile, is already floundering like a headless chicken, and has taken to the usual Australia-bashing via its state media mouthpieces. According to the Global Times, the move is another case of political manipulation by Canberra to dismantle the ballast stone of China-Australia ties. It once again accused Canberra of acting at the behest of the United States.

The pamphlet also went on to claim being told by exclusive sources that Australia has been “racking its brain to undermine China’s vaccine cooperation with Pacific Island countries.” The hitjob against Australia came just around the time when the Pacific Island nation of Nauru rejected a low bid of undersea communications network put forward by China amid security concerns. Instead, Nauru is in discussions with Australia for the development of the undersea communications network which will deliver low-cost, high-quality internet service to the island’s citizens.

Read more: Australia has completely destroyed the Chinese company that took over the Darwin Port in 2015

In April, the Scott Morrison government had terminated Victoria’s controversial Belt and Road agreement with China. A month later, Australia officially initiated a review of the Northern Territory’s 99-year-lease of the Port of Darwin to the Chinese-owned company Landbridge. Now, the Port of Newcastle is all set to be the next casualty for the Chinese.

Chinese interests in Australia are suffering one blow after the other. The Scott Morrison government knows what will hurt the CCP most, and is thus, kicking its shins on precisely those counts.

A Double Agent: German Spy was actually spying on Germany for China