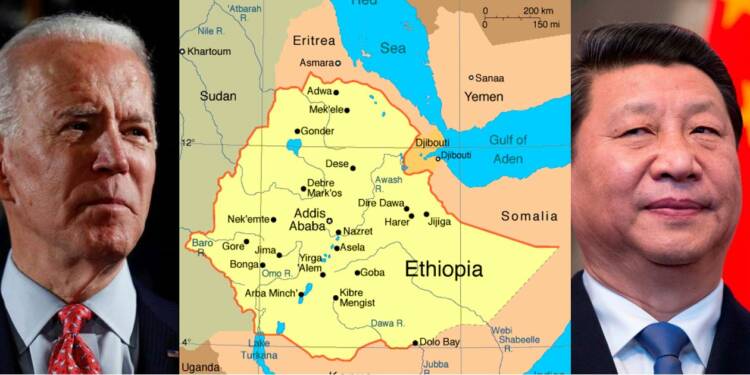 Ethiopia is Africa’s second-most populous country and is placed in the horn of Africa, an extremely important geostrategic region. The Horn of Africa is a gateway to major world shipping flows via the Red Sea and the Suez Canal to the Mediterranean. It has continuously tried to resist foreign meddling but over the past year, foreign interference in the country has greatly increased. Ethiopia has been a long-standing economic partner of China.

Ethiopia’s developmental paradigm was heavily influenced by Chinese investment since 1991 after the former’s civil war. China eventually became the top trade and investment partner of Ethiopia. But now the United States has started to increase the pressure in the horn of Africa region and Ethiopia is smack dab in the middle of it. Intense meddling by the US-led western allies can lead to a proxy war with China.

American led Western pressure against the Ethiopian government is the most immediate concern that threatens Ethiopia’s independence and sovereignty. Ethiopian Prime Minister Abiy Ahmed had given the go-ahead for a law enforcement operation in the region in November last year. In response to this, the Tigray People’s Liberation Front (TPLF) broke off from the Abiy led government, launched a separatist campaign and was designated a terrorist group.

The protracted conflict has sparked US-led Western claims of war crimes against the Ethiopian National Defense Force (ENDF), which served as a pretext for Washington to apply sanctions against a number of persons allegedly involved to them. America is also leading the effort in warning of a coming famine in Tigray Province, which its perception managers strongly suggest is wholly due to the ENDF.

Furthermore, a recent airstrike in the region is said to have resulted in numerous civilian casualties, leading to further US pressure. All of this, according to Addis Ababa, is an “orchestrated attack” against Ethiopia.

Foreign intervention has increased recently, which could be part of a proxy fight against Chinese interests in Africa. Following the end of the former’s civil war in 1991, Ethiopia’s developmental paradigm was heavily impacted by China’s.

Ethiopia’s most important trade and investment partner is China. The People’s Republic also assisted in the construction of the Addis Ababa-Djibouti Railway, which is the BRI’s showpiece project in the Horn of Africa. Ethiopia was Africa’s fastest-growing economy prior to the COVID-19 pandemic. The Strategic Partnership between China and Ethiopia is mutually beneficial and serves as a model of South-South cooperation.

Foreign influence tries to destabilise this cooperation, which, in the worst-case scenario, might lead to Ethiopia’s tragic “Balkanization.” Ethiopia is now the newest victim of a Hybrid War, with the stakes being even higher given that it is Africa’s second most populated country. Nonetheless, Ethiopia is defying the latest foreign pressure in the same way it has in the past.

PM Abiy had to recalibrate his policies due to the inadvertently centrifugal repercussions of his policies, despite the fact that he began his administration by conveying a vision of deeper decentralisation. This sparked resentment among the country’s diverse population, which the TPLF further exploited, and this gave the western allies enough space to manoeuvre and to spark a proxy war against China’s Ethiopia.

Besides, the Biden administration has appointed Jeffrey Feltman as the Special Envoy to the Horn of Africa, he is the same envoy who tacitly orchestrated the Arab spring and this suggests that a major war is about to descend upon the volatile region.

Russia, China and Iran have considerable influence in the region and the U.S also wants to have a presence to dominate the Bab-el Mandeb strait. The Bab-el Mandeb Strait ultimately connects the Gulf of Aden and the Red Sea and ensures access to Arab countries.

Pushing an entire area into an endless cycle of bloodshed serves three aims for the Biden administration. One, the United States dominates the Horn of Africa, which is rapidly becoming a geopolitically important region. Second, the Biden administration aspires to counteract Russia’s, China’s, and Iran’s expanding regional influence. Third, now that it has control of the Horn of Africa, the US can move forward with its plans for Yemen, which are far from peaceful.