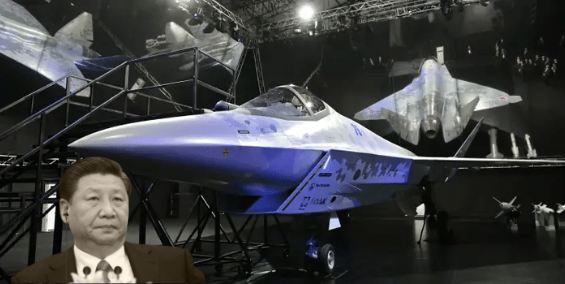 China has for long tried to reverse engineer and steal technology and it thought that it has reached a position where it can now rest on its copy planes for some time and maintain a status of military superiority. However, Russia has once again shown that China should not underestimate Moscow. At an air show just outside of Moscow on Tuesday, Russian President Vladimir Putin received a first look at a new fifth-generation lightweight single-engine fighter jet aircraft.

According to a statement from Rostec, the state-owned military giant responsible for exporting Russian technology, a prototype of the stealth fighter dubbed “Checkmate” for the 68-year-old leader was unveiled at the MAKS-2021 International Aviation and Space Salon in Zhukovsky, ahead of its official unveiling later in the day. While everyone is thinking its directed towards countering US F-35, the statements of envy and concern are coming from China.

The Chinese Communist Party mouthpiece Global Times while reporting on the plane, mentioned that the fighter jet may also affect the export of warplanes made by China like the FC-31 fighter jet. While stating that, it also did not forget to mention that the Chinese FC-31 still holds an advantage, which is entirely untrue.

According to the Associated Press, the new warplane, codenamed Checkmate, is a single-engine fifth-generation fighter jet with a top speed of Mach 1.8 to 2, a range of 3,000 kilometres, and a payload of 7,400 kg. The Checkmate, dubbed a light tactical aircraft, is designed to be smaller and less expensive than Russia Su-57 two-engine stealth fighter jet, costing only $25-30 million, and could be purchased by both the Russian air force and foreign military forces such as those in India, Vietnam, and Africa, according to the report.

The fact that the plane can be sold to the above mentioned countries, must be really concerning for China. Not only will this aircraft kill the market that China is developing for its aircraft, but also with count ries like India and Vietnam having these planes, China will lose its air superiority. These frustrations were visible in the Global Times articles where they just did not want to accept its superiority. The article mentioned, that the Checkmate will also be a direct competitor to China’s medium-sized stealth fighter jet, the FC-31, on the international arms market, and Wei said that China’s product has already made test flights, and is a step ahead of the Checkmate in terms of development progress.

The other thing is, Russia already knows how, China has from time to time copied the blueprint of the aircraft it buys from Russia and even did espionage in military establishments of Russia to steal technology. In such a situation, Russia is not going to sell its state of the art fighter jet, just to be reverse engineered and copied by the so called Chinese friends.

The statements in the Global Times article showcase how obvious is Beijing’s envy for the latest fighter jet reveal from Russia. China also knows that Russia is not going to sell this fighter jet to it and this only adds to the frustration.