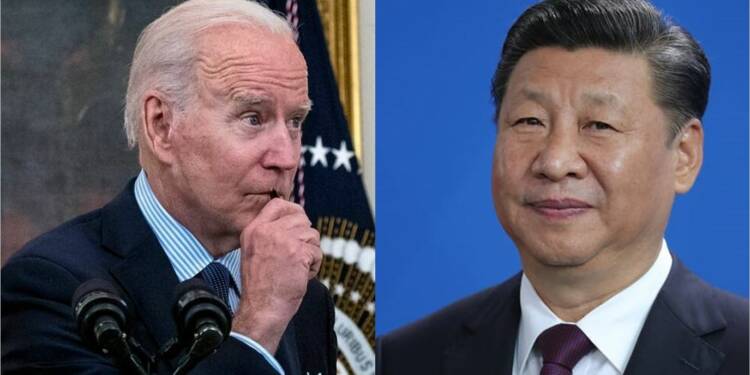 The Biden administration has followed a very unstable foreign policy doctrine vis a vis China, and while it took a more conciliatory approach early in its term, the current policy seems to be hawkish. For the Democrats, he may be a placeholder President, who is helping in the transition of power from Barack Obama to Kamala Harris, he personally wants to leave a mark in his Presidency. For this, he needs to push heavily on the climate change front, and he needs the support of China for the same. Given the current political circumstances, he cannot afford to be a China dove till the midterms in November next year.

The Biden campaign has declined to rule out the possibility that the sickness originated in a Wuhan lab. In fact, following a recent cyberattack, the Biden Administration took the heretofore unthinkable step of openly accusing China of being behind the recent Microsoft “cyberattack spree” (they were). Even former President Donald Trump, a known China hawk, had never done anything like this. However, as public opinion will become an unimportant factor post-midterm, to get China on board for climate change measures, in about 15 months, the US under Biden will become a China dove and will say YES to everything Beijing says.

President Biden loves to give the impression that he is in charge. The reality, however, is far more intricate than that. According to multiple accounts, Mr Biden is not the one in charge of his government. Instead, there are several centres of power contending with one another on a variety of issues, such as the administration’s China policy or its Global Warming policy.

There are the Liberal Hawks, led by Kurt Campbell, who sincerely feel that taking a stronger stance towards China is in America’s best interests. Then there are the doves, like Susan Rice and John Kerry, who want to go back to the pre-Trump days of seeing China as a peaceful partner. The third category is Mr Biden’s entourage of political hacks. They don’t have any policy preferences other than making the president appear good in the press. Following the hawks’ lead on China is making Biden seem good in the news right now. As a result, the political hacks have aligned themselves with the liberal hawks for the time being.

However, when it becomes politically inconvenient for Mr Biden to maintain his tough stance on China, he will attempt a policy shift. He’ll try to establish a legacy that goes beyond serving as a “stand-in” Democratic Party president between Barack Obama and Kamala Harris. He can accomplish this by convincing Beijing and Washington to work together on climate change.

Biden will soften his stance on China, despite his outward toughness. The post of Climate Czar was offered to John Kerry, a classic Washington insider, for a reason. And early signs of the same are already visible. John Kerry, the US climate envoy, has urged China to accelerate and deepen its carbon-cutting efforts. Mr Kerry stated that the global aim of keeping temperatures below 1.5 degrees Celsius would be “basically unattainable” if China did not reduce its emissions sufficiently. Mr Kerry stated that he believes China can do more and that the US is eager to collaborate closely to ensure a sustainable climate future.

While it will be one-sided, with the United States required to bear the brunt of that burden, theoretically Biden will have secured a supposedly historic agreement. He, along with the loyal mainstream media, will create a favourable narrative and will be able to gracefully exit the White House and be known as the president who saved the environment. And the subsequent rise of China as the larger power can be a fait accompli which he will not shoulder any responsibility for.